It's not enough to say that Louis C.K.'s "Louie" is the finest, funniest, most adventurous half-hour comedy on television. It's not even necessarily accurate, since the series is more like a short story anthology than any kind of sitcom you've ever seen. Yes, Louie is the main character, a divorced New York stand-up comedian whose observations and adventures provide the backbone for the stories (sometimes more than one per show), but other characters or storylines may or may not continue beyond the half-hour in which they're introduced. Last season, for instance, Louie found himself in temporary but indefinite custody of his 13-year-old niece at the end of the episode... but she never reappeared.

The flighty, fidgety bookstore employee played by Parker Posey, whose name we don't discover until the last word of the two-parter called "Daddy's Gilfriend" (it's Liz), is unlikely to show up again, but Posey says she'd love to come back in the role he originally envisaged for her -- as his shrink. This, I think, is a good thing. Liz's function was to act as a force of instability, to shake Louie out of his risk-averse routine. And, boy, did she succeed. She is fascinating, goofy, beguiling -- and baffling, frustrating, unsettling, frightening, exhausting, all in one volatile, bubbling cauldron of moods and impulses. You can read it all in Louie's face as he attempts to figure out what to make of her, from situation to situation, moment to moment, all through the night. (His range of tentative reactions reminded me of the wife of bus driver Mark Ruffalo in "Margaret," who churns through turbulent sequence of responses as she tries to get a read on Lisa Cohen and what she could possibly want from her husband.) 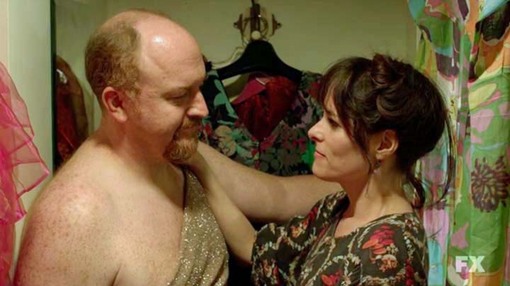 Liz's energy comes in manic surges, then just as abruptly ebbs. She's alternately determined, triumphant, then defeated. She dares Louie to put on a dress -- seen in one lengthy medium shot in a curtained changing "room" (more like a closet) -- and then she never steps back to get the full view. We never see much below his chest, either. Louie slips a homeless guy a leftover pickle and she insists that, if she really wants to help him, they should help him. Her only big close-ups are in her encounter with this man, as he tells her about the hallucinations of snakes he has when he can't afford his meds. They buy him a refill of his anti-psychotic prescription and put him up in a Comfort Inn for the night. 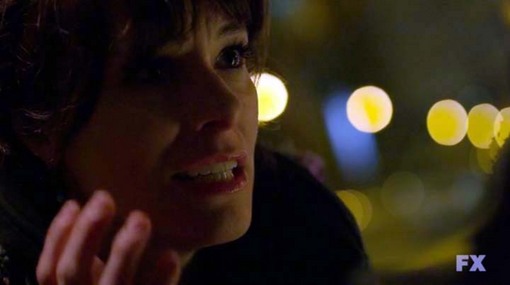 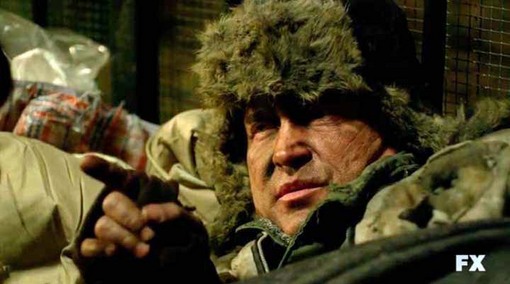 And when Liz insists they climb a seemingly endless stairway (it's shot to emphasize how many wearying flights loom above them, how far they have to go, until further effort seems futile -- and which point she pushes him like a drill sergeant), they get to the top and... it's nothing special up there. No great view, no romantic vista. Just a rooftop. Liz's non-stop TMI monologue throughout the evening is sometimes about her (getting cancer when she was a kid), sometimes her thoughts about Louie -- and always about herself, either way. 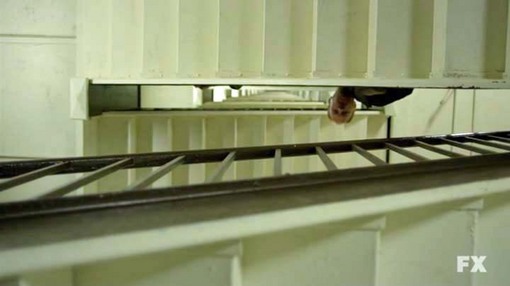 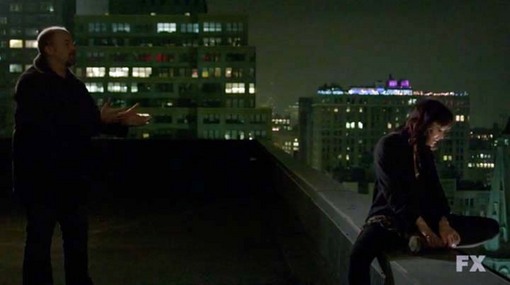 Up here, they're either isolated in separate shots, pushed to the far edges of the frame so there's a chasm between them, or seen over Louie's shoulder, with him blurry and her in focus. It's all getting very unstable. When he creeps to the edge and looks down, he's not just looking off the side of the building. He's looking into some other void -- within him, within her. 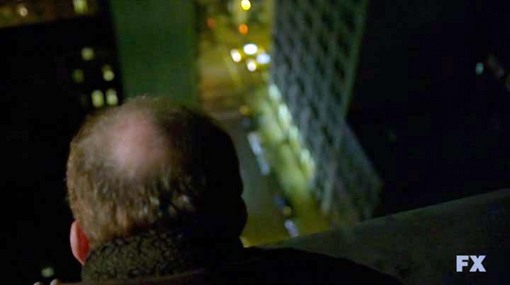 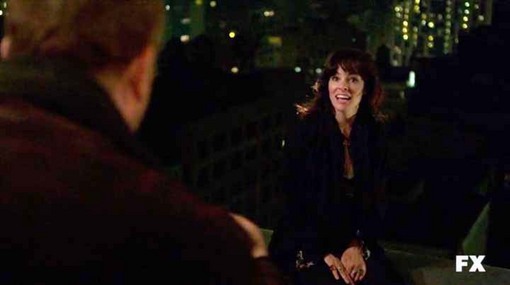 Liz tells Louie that the reason he's scared to come to the edge of the roof is because "a tiny part of you wants to jump because it would be so easy. But I don't want to jump, so I'm not afraid. I would never do that. I'm having too good of a time." And then... she seems distracted, she loses hold of the moment, she deflates. Just another dead-end. It's time to go back downstairs. Louie goes from apprehension to relief mingled with disappointment -- which is the way it's always going to be with Liz. She's volatile -- alternately charismatic and scary, and sometimes both at the once. 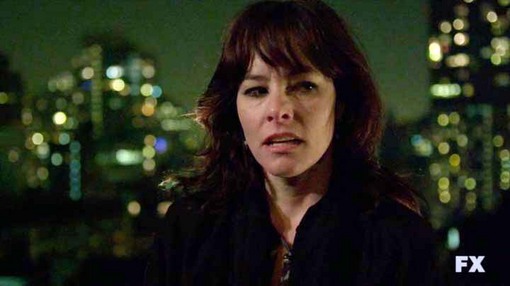 She's also an improviser, something Louie immediately likes and admires in her. She keeps making up scenes and he keeps trying to adapt, to figure out what role she's playing and what role he's supposed to play. Look at the scene in which she tells him that her real name is "Tape Recorder." First of all, CK's instincts as a director and an actor are superb. Like the previous scene in the vintage clothing store, it plays out in two shot -- with a whole other scene going on in the pool parlor seen through the window behind them. Not only do the actors get to determine the pace of the scene, but we are allowed to look back and forth at their faces and bodies, to take in how they are interacting. (Yes, I wouldn't trade this single shot, and the intricacies of behavior it contains, for every comic-book movie ever made, except for 1978's "Superman." This is cinema, not pictograms.)

Louie belatedly introduces himself by name and asks her name -- the natural, expected, courteous thing, of course. Liz pauses and looks down. We think she's reluctant to give her true name, but maybe she's just trying to think of something to shake things up, to move the exchange into more off-kilter territory. When she comes up with "Tape Recorder," you can see the confusion flickering across Louie's face: Is she f**king with me? Should I laugh? Maybe not, because she might be sensitive about it. He decides to play along, draw her out. (First rule of improv: never deny a premise; never say "no" to an idea -- only "yes, and" or "yes, but.") And she keeps going... until she ends the scene, wondering how long it could have kept on, and a guy in the pool hall starts flirting through the glass. 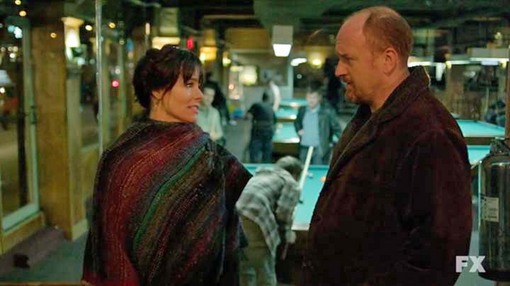 If all this doesn't sound terribly funny, well, it's quite often not. It doesn't need to push for laughs in order to keep us engrossed, and some of the funniest moments are also painful, even heartbreaking. In fact, one of the stranger things this season in my opinion is that Louie (and, perhaps, Louis) doesn't seem to be all that into his "Seinfeld"-like framing stand-up bits. It feels deliberately half-hearted -- like the one, tossed-off balloon "joke" in the Miami episode, or the disappointingly conventional and uninspired dating/farting material at the start of this episode.

But that's OK. It only demonstrates how much richer the rest of "Louie," and Louie's off-stage life, is. Many have observed that, while watching Buster Keaton, he's so funny we sometimes forget to laugh. Yes, he's deeply hilarious (and, in my opinion, the greatest filmmaker who ever lived), and he's also a mesmerizing visual artist, a profound metaphysician of the cinema. Obviously, I'm not putting Louis C.K. in that league (Keaton's in a league of his own anyway), but when we get to see writing and filmmaking this good, and performances as accomplished as Melissa Leo's ("Telling Jokes/Set-Up"), Miguel Gomez's ("Miami") and Posey's ("Daddy's Girlfriend, Parts 1 & 2"), funny is gravy. 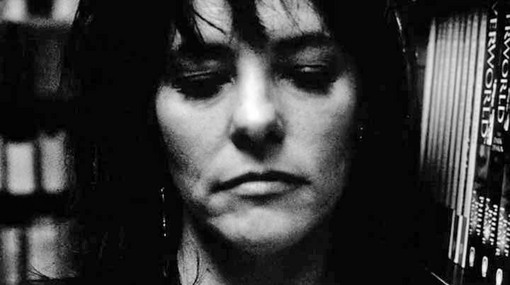 P.S. Another of the best-written scenes in recent memory comes in S03E03 "Miami," in which Louie and lifeguard Ramon try to talk about their whirlwind friendship and what it means and to, you know, straighten out any misunderstandings without offending anybody... There's hardly a complete sentence (or significant noun or verb) in the entire, excruciatingly awkward, poignant and funny conversation: "I'm not, okay, like, like, I don't judge anybody, right, but, and I'm not, okay, first of all, I have zero anything, okay?" 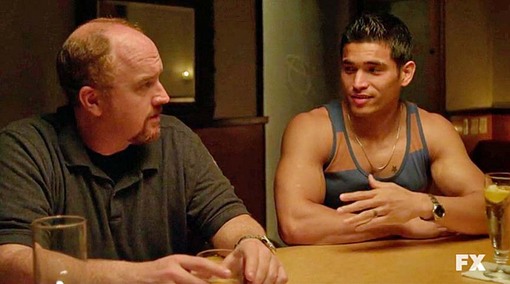