In the nearly three days since I learned of Eric Rohmer's death, I've been looking over his filmography, which has stimulated a flood of fond recollections. Few directors have left behind so many enjoyable, stimulating, gorgeous movies -- photographed by none other than Nestor Almendros until the mid-'80s, a beau mariage made in cinema heaven. I was trying to think of a Rohmer film I actively dislike... and I can't. (There are a few I haven't seen, a few I like more than others, a few I don't remember very well...) But a surprising number of them still live among my favorite movie-memories: "Perceval," "Summer"/"The Green Ray," "My Night at Maud's," "The Marquise of O...", "Pauline at the Beach," "Le beau mariage"...

At The Crop Duster, Robert Horton, who was discovering these movies at the same time I was, recalls Rohmer by resurrecting his terrific 1984 piece on "Pauline at the Beach," and by lightly tracing his own life through cinematic encounters with the director's movies in an entry he calls "A Rohmer Datebook."

First, a swell mini-overview from the former:

Rohmer has been on a hot streak lately. Keep in mind he was a slow starter compared to some of his friends in the French New Wave. Rohmer made short films during the 1950s, and he was editor-in-chief of Cahiers du Cinema, the magazine in which Truffaut, Godard, Chabrol et al. vented their auteurist spleens, from 1957 to 1963. Those other fellows had already collected an armful of international awards by the time Rohmer completed his first widely-recognized feature, "La collectioneuse," in 1967 (though he had been directing for some time already). That film was part of his contes moraux--Moral Tales--and the next entry, "Ma nuit chez Maud" ("My Night at Maud's," 1968), brought him shoulder to shoulder with the world's leading filmmakers. After he finished the Moral Tales, Rohmer took time out to pursue projects with settings completely different from the palpably modern landscapes of the six Moral Tales; predictably enough, "The Marquise of O..." (1976) and "Perceval le Gallois" (1978) were two of the best and most intriguing works of the decade.

Now Rohmer is right in the middle of another cycle. This one is called Comedies et Proverbes, and so far its titles are "The Aviator's Wife" (1980), "Le beau marriage" (1982), and "Pauline at the Beach" (1983). Like the Moral Tales, this new series consists mostly of people talking about love, sex, freedom, and more love. For the most part, these people are absolutely ordinary, and their problems, while important to them, are not unusual or earth-shaking. Nothing that can't be talked out.... 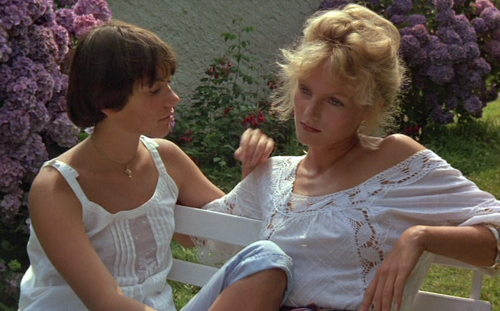 And yet, Rohmer wasn't all talk. His lighting, framing, cutting are endlessly crisp and alive. As Robert writes, beautifully, of a scene in "Pauline":

This dialogue is stimulating, but the visualization of the scene is what makes it so fraught with excitement and edginess. Rohmer and his brilliant cameraman Nestor Almendros (a longtime collaborator) put each of the three adults in his or her own portion of screen space, so that Rohmer is cutting back and forth among them. The surroundings have a convincingly frowsy look, and the people are in authentic states of sprawl--except Pierre, who seems a little too uptight. Everything, the lighting, clothing, tones of voice, rings precisely true in capturing the atmosphere of an after-dinner fat-chewing session. When Rohmer cuts back and forth among the various people and those separate spaces, he introduces the notion that they are all opposing each other in some game--that it is going to be extremely difficult for their philosophies to interact.

There is, however, one person here not compartmentalized: Pauline, who is moving through the backgrounds of shots and finding her own way around the place. It's her innocence and lack of presumption that allows her this freedom, a freedom that the others can only talk about....

In his Rohmer Datebook, Robert writes about the "underappreciated masterpiece," "Le beau mariage" (1982):

... I included this in my accounting of the Ten Best of 1982, in the newsletter of the Seattle Film Society, The Informer, which I edited. In that short take, I said, "With his typically bemused wisdom, Rohmer shows us how utterly necessary it is to be foolish." Please don't blame the movie for that sentence. I was 24 years old. Any good critical writing is autobiographical, and I think I was doing some foolish things (not interesting or dark or cool foolish things, just foolish things), and trying to make myself feel better through a Rohmer film.

I wish I'd said that. Reminds me of this, from "The Magnificent Ambersons":

At twenty-one or twenty-two so many things appear solid and permanent and terrible which forty sees are nothing but disappearing miasma. Forty can't tell twenty about this; that's the pity of it! Twenty can find out only by getting to be forty....

Eric Rohmer lived to be 89.

¹ I'm looking for the actual article. If I find it, I'll quote it directly.