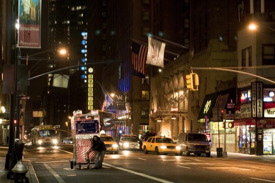 Dana Stevens (at Slate.com), Susan Gerhard (SF360.org), and I are the only critics I know of who put "Man Push Cart" on our best of 2006 lists. Roger Ebert probably would have been a fourth, if he'd made a list this year -- because he programmed "MPC" in his Overlooked Film Festival. Time and DVD will no doubt correct this ghastly critical oversight.

If it hadn't been for the 1981 Village Voice Pazz & Jop Poll, I would never have discovered one of my all-time favorite albums: Human Switchboard's "Who's Landing in My Hangar?" It's the only studio LP by a Velvet Underground-influenced band from Ohio (Bob Pfeifer, Myrna Macarian and Ron Metz), released on Faulty Products/IRS Records and, well, it didn't get much advertising or marketing support. (You can still read Robert Christgau's Consumer Guide mini-review here. See if you can find it on LP. It never made it to CD.) It came in at #11 in the poll, and ranked #10 on The Dean's List, between Psychedelic Furs' "Talk Talk Talk" (yes, the one with "Pretty in Pink" on it) and Tom Verlaine's "Dreamtime" (another favorite of mine to this day).

Which is why I find it helpful to scour critics' polls (and individual lists): to alert me to titles I may have overlooked -- and, perhaps, may even come to treasure. (Just beware of those who prize obscurity -- or obtuseness -- for their own sake.) The First Annual LA Weekly Film Poll has a nifty interface, where you can click through by category, see which critics voted for what, or look at individual critics' lists. There's even a Worst Film category, the top four winners (winners?) being:

Everything else averaged two points or fewer. (I really dug watching "Miami Vice" myself. It was an exercise in style, not unlike "The Departed," but it had a spark that, actors aside, I felt Scorsese's picture lacked.)

And, of course, the Biggest of Them All: The Master List of Top Ten Lists at Movie City News Awards Watch (now with more than 250 individual critics' lists. Editor David Poland's statistical analysis here.

And don't miss David Bordwell's Best Danish Films I Saw at the End of 2006 List. You may discover something you'll eventually love if you make the effort to see it!