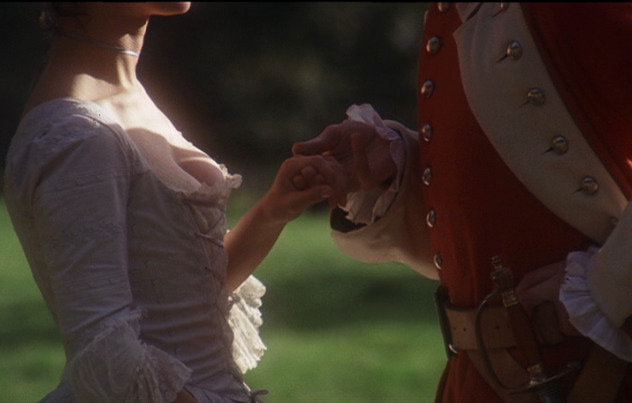 A mighty zoom. It begins here... 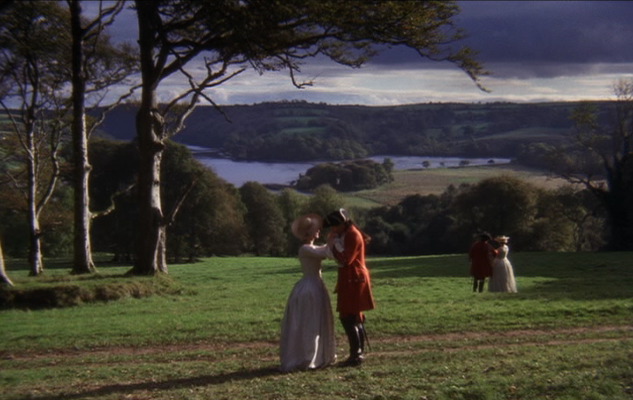 It's been said that what "The Shining" is to the dolly/Steadicam shot, "Barry Lyndon" is to the zoom. Jeffrey Bernstein offers an in-depth exploration of all those slow, still-life zooms in "Barry Lyndon" -- 36 of them by his count, and I believe him! (Here's the .pdf file.) I have so much reading to do.

The zoom, because it is purely optical and does not involve actually moving the camera, has unique visual properties. It tends to flatten the image as it enlarges it (I was going to say "gets closer," but of course that's the point -- it doesn't). Kubrick uses it so that his characters appear to be locked within the frame, and shots are presented like paintings -- portraits or landscapes. It's part of the canvas of the film, as it were. (BTW, my revised 1981 appreciation of "Barry Lyndon," one of my favorite films, can be found here: "Barry Lyndon and the Cosmic Wager.")

In "Barry Lyndon" Kubrick elevates a ‘poor cousin’ as it were of film technique—the zoom in progress—to a central position. In the first twenty-one minutes of the film there are six zooms and one zoom-like track-out. The majority of these zooms are elaborate; the shortest in duration lasts no less than ten seconds, while the fifth (the Nora-Captain Quin love scene) lasts a remarkable thirty-four seconds, and the sixth (the opening of the Barry-Captain Quin duel) lasts thirty seconds. Six of the first eleven scenes in the film, including three scenes in a row, begin with elaborate zoom-outs. The audience can’t help but notice the zooms. Perhaps never before in the history of commercial cinema have zooms been employed to be noticed by the audience. And not only to be noticed, but to be thought about as well. It seems to me that Kubrick’s use of the zoom movement in "Barry Lyndon" is the most elaborate and sustained use of zoom movement ever seen in a film.

You'll get no argument from me! Though Robert Altman and Vilmos Zsigmond do deserve special mention for their work in "McCabe and Mrs. Miller," "Images" and "The Long Goodbye." In the latter the camera never stops zooming and moving, as if it were bobbing on the waves at Malibu...

(Yes, those last four words are a Joni Mitchell reference.)

Chaz has news on Roger's recovery