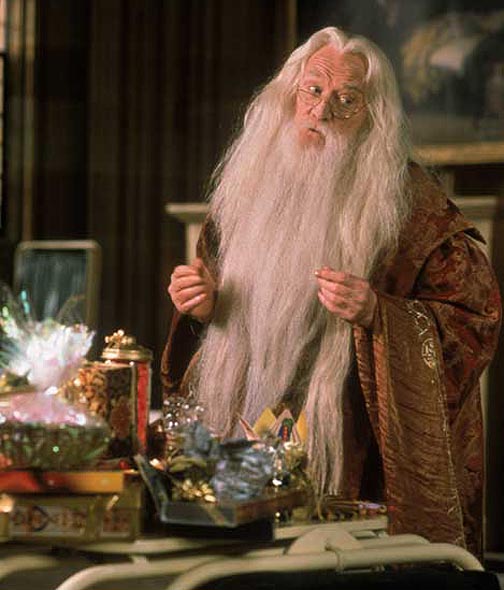 Richard Harris as one version of Dumbledore, from "Harry Potter and the Sorcerer's Stone."

First, let's get the quote right. When asked if the "Harry Potter" series character, Prof. Albus Percival Wulfric Brian Dumbledore, a proponent of love as a power in the universe, had ever been in love himself, author J.K. Rowling said last week: “My truthful answer to you... I always thought of Dumbledore as gay.”

That's what started the whole rumpus, which Kristin Thompson analyses in splendid detail at "Observations on film art and 'Film Art'." I am particularly impressed by her post because I found it fascinating reading, even though I've never read a "Harry Potter" book or seen one of the movies.

Note that Rowling did not say Dumbledore was gay. She was explaining how she had always thought of the character she created, "probably before the first book was published." As Thompson reports, Rowling also said in a 1999 interview: “I kind of see Dumbledore more as a John Gielgud type, you know, quite elderly and -- and quite stately.” If I may resort to an idiomatic expression: Hello!?!?! 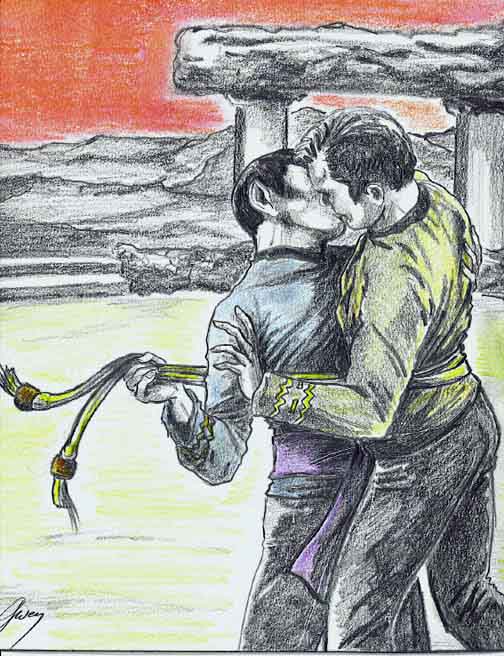 Kirk and Spock (or is it Denny Crane and Alan Shore?) from some "PG-13-rated" K/S fanfiction art: "The Ahn-Woon" (AU Amok Time koon-ut-kalifee kissing), by Gwenaille.

There was no uproar over the Gielgud remark. Others, it seems, had come to think of Dumbledore as more of a Richard Harris type and then a Michael Gambon type, although the movie role had originally been offered to Patrick McGoohan. But her point was that Dumbledore and his best friend Grindelwald had been in love, until the latter became his mortal enemy.

Last weekend, in a discussion about the work of David Cronenberg at the Frye Art Museum in Seattle, I recalled that when Cronenberg's "The Fly" was released in 1986, it was widely interpreted as a metaphor for AIDS, and the pain of watching a loved one's body and mind ravaged by disease and transformed into something Other than what they once were. But, after the movie came out, Cronenberg said he'd thought of it simply as a metaphor for getting old, for the degenerative, transforming process of aging. Time and physicality themselves are the autoimmune virus, something to which none of us can develop a resistance.

Does that mean "The Fly" is about aging and not about AIDS? No. Cronenberg, like Rowling, was simply describing his thoughts during the process of creating the work in question.

It is the nature of serial fiction to create a world and let its characters move around in it, while leaving much of what happens to them off-page or off-screen, where we are encouraged to imagine them leading lives beyond what we actually witness as readers or viewers. Indeed, it's essential to the living illusion of the fantasy that we envision characters going about their business between scenes, and not just waiting around off-stage to make their entrances.

As Rowling said of the intense soul-mate relationship between the young Dumbledore and Grindelwald: “It’s in the book. It’s very clear in the book. Absolutely. I think a child will see a friendship, and I think a sensitive adult may well understand that it was an infatuation. I knew it was an infatuation.” Remember, too, that we're talking about a British boys' school here, a place where intimate same-sex relationships are supposedly as commonplace as schoolbooks.

So it's not like Rowling just made this up last week and then tried to slap it onto her seven-book series retroactively....

Perhaps Rowling's decision to make Dumbledore's sexuality explicit was born out of her frustration that few readers, screenwriters included, picked up on her hints, which were particularly heavy in the final volume. The clues were subtle enough, or maybe our expectations heteronormative enough, that -- although it was a question I talked about extensively with fellow readers this summer -- the topic did not seem to get a lot of national critical attention in the weeks after the book's release.

But a close reading would reveal that "The Deathly Hallows" was shot through with intimations about the headmaster's sexuality...

... the smarmy kiss-and-tell insinuations of [Rowlings'] gossip-mongering character Rita Skeeter, whose lurid biography of the apparently saintly headmaster — titled “The Life and Lies of Albus Dumbledore” — is described in “Harry Potter and the Deathly Hallows.”

“Coming next week,” a newspaper article on Skeeter promises, “the shocking story of the flawed genius considered by many to be the greatest wizard of his generation.” Skeeter drops teasing hints about Dumbledore’s “murky past,” about his not being “exactly broad-minded” and suggests that in his mentoring of Harry there is an “unnatural interest,” something “unhealthy, even sinister.” As for the idea that Ms. Rowling suggested — that as a teenage prodigy, Dumbledore had a homoerotic infatuation with another prodigious young wizard, Grindelwald (who later went over to what in “Star Wars” is called the Dark Side) — Skeeter hints at this in coded allusions....

... wonders about the close relationship between the headmaster and his young pupil: "It's been called unhealthy, even sinister ... there is no question that Dumbledore took an unnatural interest in Potter." Here Rowling is aping the leering, speculative tone of news stories about gay priests, Cub Scout leaders, and teachers accused of inappropriate relationships with their charges.

Like I said, I haven't read the books, but how did anybody miss that? Or was it just dismissed because it was coming from the character of a sleazy tabloid reporter?

Almost from the beginning, fans noticed the loving nature of the relationship. A few fan writers started speculating about the possibility of a sexual relationship between Kirk and Spock. The Kirk/Spock phenomenon eventually took on a life of its own, and became one of the driving forces in "Star Trek" fanzines during their heyday.

Kirk/Spock, also commonly referred to as "K/S," was the first prominent slash pairing to appear in English-language fan fiction. In fact, the term slash (as in slash fiction) comes from the expression "Kirk slash Spock"--as distinguished from "Kirk and Spock" (K&S), stories about the friendship between Kirk and Spock with no sexual component. The term was shortly thereafter applied to depictions of homosexuality in media fandom at large....

Many believe that the origins of Kirk/Spock lie in deliberate homosexual subtext in the "Star Trek" episode "Amok Time" (1967), written by noted science-fiction author Ted Sturgeon. There is good reason to believe Sturgeon's part in this is deliberate; Sturgeon was known for introducing homosexual themes to science fiction during the homophobic 1950s. He also wrote a scene in an earlier "Star Trek" episode, "Shore Leave" (1966), in which Captain Kirk apparently believes that Mr. Spock is giving him a backrub.

Advertisement
The K/S phenom was the first thing I thought of when I read of Rowlings' remarks on the (now deceased) Dumbledore's early same-sex love for Grindelwald. But Thompson writes, "The situation is different... I think, because most fans would not claim that their fics enter into and become part of the canon, even though they may meticulously obey its premises. Rowling seems to be claiming the right to expand the HP canon by her statements as well as by her writing."

Well, yes and no. Obviously the K/S fanfiction writers are playing with alternative universes and Rowling spoke as the author interpreting the one she created. But she wasn't expanding the canon, simply pointing out what she'd already put there, and explaining why. She wasn't writing about it officially, as an addendum to, or reinterpretation or, the canon itself (like, say, George Lucas's belated "Star Wars" prequels). She was responding to a question posed to her at a public appearance. [See her full remarks about Dumbledore -- thanks to ticknart via The Leaky Cauldron, below.]

Ridley Scott recently said about Harrison Ford's character in "Blade Runner": "Yes, he’s a replicant. He was always a replicant.” These remarks would be largely irrelevant if they weren't supported by evidence within the work itself. But they don't change what's already there, and they don't make for any definitive reading (as the Scanners comments on "Blade Runner" will attest).

Rowling was telling her readers what she had in mind when she imagined and wrote one of her characters. (Thompson says Rowling is considering publishing an encyclopedic guide to her "Harry Potter" world that would include lots of background she used to write the books, but wasn't able to actually include in them.) The notion that she "outed" Dumbledore is just silly. He is who he always was.

UPDATE, from The Leaky Cauldron:

The question was: Did Dumbledore, who believed in the prevailing power of love, ever fall in love himself?

JKR: My truthful answer to you... I always thought of Dumbledore as gay. [ovation.] ... Dumbledore fell in love with Grindelwald, and that that added to his horror when Grindelwald showed himself to be what he was. To an extent, do we say it excused Dumbledore a little more because falling in love can blind us to an extent? But, he met someone as brilliant as he was, and rather like Bellatrix he was very drawn to this brilliant person, and horribly, terribly let down by him. Yeah, that's how i always saw Dumbledore. In fact, recently I was in a script read through for the sixth film, and they had Dumbledore saying a line to Harry early in the script saying I knew a girl once, whose hair... [laughter]. I had to write a little note in the margin and slide it along to the scriptwriter, "Dumbledore's gay!" [laughter] If I'd known it would make you so happy, I would have announced it years ago!

Jo also said after revelation: "You needed something to keep you going for the next 10 years! ...Oh, my god, the fan fiction now, eh?"

(This post is dedicated, with affection, to the late Sherry Laing, an adventurer in realms of imagination -- among them fantasy, science-fiction, horror and fanfiction.)