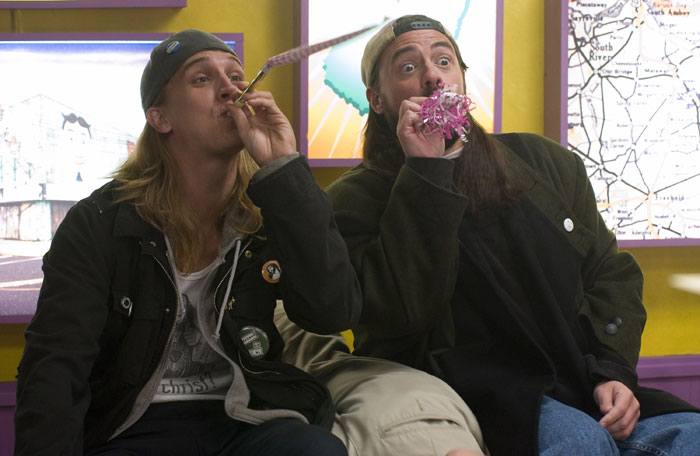 Not Very Silent Bob blows his own tooter to make some publicity noise.

Extra! Extra! It's a match made in movie hell: Joel Siegel vs. Kevin Smith (or vice-versa). It's ugly, but it's perfect, because the former is to movie reviewing what the latter is to movie directing. So, when Siegel stormed out of a screening of "Clerks II" (allegedly exclaiming on his way up the aisle: "Time to go! First movie I've walked out of in 30 [bleeping] years!"), well, Smith saw an exploitable promotional opportunity and ran with it. Not for nothing is he considered the leading contender for Most Avidly Self-Promoting Director, neck-and-neck with M. Night Shyamalan. Smith posted a positively (or should that be "negatively"?) scabrous attack on Siegel on his blog, and went on a drive-time morning radio show to further express his outrage. Plus, he got in an indirect and gratuitous smack at Shyamalan, whose "Lady in the Water" opens opposite "Clerks II" Friday, writing: "I don’t need Joel Siegel to suck my d--k the way he apparently sucks M. Night’s, gushing over his flick before he’s even seen it..."

(WARNING: If you follow the link to Smith's blog above, be prepared to scroll down through various merchandising offers before getting to the posting itself; and, of course, you should expect lots of profanity and comments about donkey shows and mustaches and ejaculate -- that incorrigible Smith je ne sais quois!)

If Siegel's own account of his outburst on that radio show is correct, it was unnecessary and unprofessional. He could have just walked out and chosen not to review the picture. If he did write anything about the movie (he couldn't review it because he'd only seen 40 minutes), he was indeed ethically obligated to tell his readers/viewers that he had walked out in the first hour. But, somehow, I find myself having just a tiny bit more respect for Siegel than I ever had before, simply because I didn't think he was even capable of caring enough to be offended. I remember leaving a studio screening of some Christopher Lambert turkey in LA about 15 years ago (after the movie was over) and the publicist saying to me: "Yeah, I think we're gonna have to rely on Joel Siegel for this one" -- referring to Siegel's Peter-Travers-like reputation for pumping out ad blub copy to promote just about anything.

Full disclosure: I once liked a Kevin Smith movie ("Dogma"), and I haven't seen "Mallrats" or "Jersey Girl." Others, however (especially "Clerks"), have been painful experiences for me. I feel like an accused Communist writing this, but it is my full confession. Indeed, when an aspiring indie filmmaker (who has since had considerable success) once asked me for some directing advice, I told her to watch Smith's films to see exactly how not to shoot a movie, especially a comedy. She recently wrote to say she had heeded this advice, and to thank me for it. She is more than welcome. You can learn a lot from watching bad movies, and Smith's are every bit as hacky as Michael Bay's. The only difference is that the budgets are generally a bit smaller.

At the Independent Spirit Awards this year, Smith did his aw-shucks self-deprecating act and belittled his own directing skills, but apparently critics are not allowed to do their jobs and scrutinize his work. What puzzles me is that Smith and his fans openly acknowledge they know his movies aren't particularly well-made, but they don't care because they think they're funny. Smith himself writes: "I recognize that brand of whimsy might not be for everybody. Film appreciation is very subjective..." So, why not leave it at that? Smith can't. Witness, for example, the following stories from Mark Caro, Scott Foundas and David Poland:

He tracks down every review and every story about him, whether written by a nationally known writer or some anonymous schmo on a Web site. [...]

The day that Smith's inside-joke-filled farce "Jay and Silent Bob Strike Back" came out in 2001, he actually posted on his Web site a rundown of every single review in the country -- the star rating (if there was one) and his own comment. When he got to "1 1/2 stars, Chicago Tribune," he wrote, "Lose my e-mail, Caro."

Almost three years later, when I e-mailed him for comment for a news story I was writing -- as I occasionally used to do before my review -- he responded by asking if I'd first take back my "Jay and Silent Bob" review. My response was that now he knew that my positive reviews, such as of "Chasing Amy," weren't just snow jobs. No dice. No comment. [...]

Smith may be the most critic-savvy filmmaker who doesn't make films for critics. His sense of humor is foul-mouthed, scatological and often suggestive of someone who never let go of his adolescent sexual obsessions. He's got a sizable cult that he plays to -- particularly on "Jay and Silent Bob" -- while reviewers tend to be split between those who appreciate his taboo-busting gusto (applied to religion in "Dogma," bestiality in "Clerks II") and those who find it sophomoric.

Smith goes on to quote from negative reviews of "Jersey Girl" by Eleanor Ringel of the Atlanta Journal-Constitution, Stephen Holden of the New York Times and Richard Roeper.

Foundas, in a review written as an open letter to Smith:

But to the best of my knowledge, in the decade I’ve been writing about movies for various publications in this city, I’d never done anything to engender your ire. So imagine my surprise when I took my seat at a press screening of 'Clerks II' last Monday morning, only to be tapped on the shoulder by a publicist and kindly, albeit firmly, asked to leave.

In truth, this teacup tempest had begun to brew the week before, when a different publicist (one I’ve known for years) phoned to coerce/threaten me into assigning someone other than myself to review your film.

“Kevin reads everything that’s written about him," she told me, before going on to explain that apparently certain things I’d written in the past had led you to feel I had some kind of personal bias against your work.

When Foundas was able to prove that he had, in fact, liked some of Smith's earlier films, he was allowed to see "Clerks II."

Kevin has become the kind of whinny, thin-skinned bitch (used in the truly non-gender way) that he makes fun of in his films. He has become thoughtless and mean about people who do not kiss his ass like the deity he has built himself into on his sites. (Yes, I see the irony of me writing that... but I don't think I am quite in Kevin's class) He has become a hypocrite, who complains about the traits of critics after employing Jeff Wells for 3 years, who is guilty of all the things Smith now claims to hold dear (you don't attack a person's physicality... a critic can't review a movie that he hasn't sat through... don't disrupt and distract from others watching the movie). And Smith attacks others in ways that would send him through the roof with rage.

So, Smith wants the good reviews without risking getting the bad ones. Who can blame him? I suggest he just grow some cojones, be upfront and honest about it, and announce publicly: "If you don't like one of my movies, you will never be allowed to a press screening of Un Film de Kevin Smith again." That seems fair. Then critics wouldn't have to go see the movies, and soon there wouldn't be anyone allowed to review them and everyone would be happy. He needn't worry about me, though. I promise: If I want to see one of your movies, I'll buy a ticket like anyone else. That way I can leave whenever I want to. But I promise not to boo, hiss or applaud until the movie's over.