Is this Halloween costume racist? 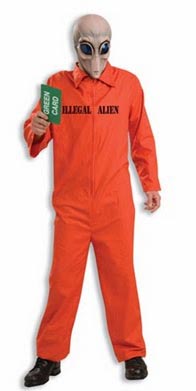 This "Illegal Alien" costume has been pulled from a number of stores because, in the words of one immigration rights activist, it is "distasteful, mean-spirited, and ignorant of social stigmas and current debate on immigration reform." I don't know what its designers and manufacturers intended, but I can see how it could be viewed that way.

On the other hand, this particular costume (unlike some others that have been removed from shelves) doesn't single out any particular ethnicity. As someone who is unabashedly pro-immigrant rights, I can also see it as a scathing satirical comment on the mindset of those who view immigrants as non-human. When I saw a photo of this costume, my first thought was of this summer's science-fiction hit "District 9" (and 1988's "Alien Nation"), which used extra-terrestrials as a metaphor for the treatment of illegal aliens and the ghettoization of black South Africans under apartheid. Roger Ebert wrote:

The film's South African setting brings up inescapable parallels with its now-defunct apartheid system of racial segregation. Many of them are obvious, such as the action to move a race out of the city and to a remote location. Others will be more pointed in South Africa. The title "District 9" evokes Cape Town's historic District 6, where Cape Coloureds (as they were called then) owned homes and businesses for many years before being bulldozed out and relocated. The hero's name, van der Merwe, is not only a common name for Afrikaners, the white South Africans of Dutch descent, but also the name of the protagonist of van der Merwe jokes, of which the point is that the hero is stupid. Nor would it escape a South African ear that the alien language incorporates clicking sounds, just as Bantu, the language of a large group of African apartheid targets.

Though as Ebert notes, the last third of the movie devolves into "standard shoot-out action," the movie scores some metaphorical points about the ways humans "dehumanize" the intelligent aliens -- referring to them derogatorily as "prawns," restricting them to "neighborhoods" that are really internment camps. In fact, the aliens are as "human" as any of the movie's homo sapiens.

So, you see, if I wore the above costume, I would be thinking of it as a spit in the face to those who regard illegal immigrants as 1) scary; and 2) less than human. I can imagine a huge immigrant rights demonstration, with thousands of people dressed in these costumes, saying "Is this how you see us?" or "Immigrants are people, too." America is a nation of immigrants (legal and otherwise). We're not going to deal with the "immigration problem" (if, indeed, it is a significant problem and not just a wedge issue, ripe for exploitation by appealing to racial and economic prejudices) as long as we pretend that people have no understandable human incentive to want to live and work here. The costume "illegal alien" (in a Guantanamo jumpsuit?) simply wants a green card, and plenty of American businesses and individuals are happy to employ her/him. (Which reminds me: Whatever happened to all those great jobs NAFTA supposedly sent to Mexico? Don't answer that.)

The meaning of this costume may lie not only in the eye of the beholder, but in the intentions of the wearer. And it might mean perceived differently in Texas than in Oregon -- or in Dallas than in Austin. Hmmmmm. What if the stencil font were replaced with Sarcastica?