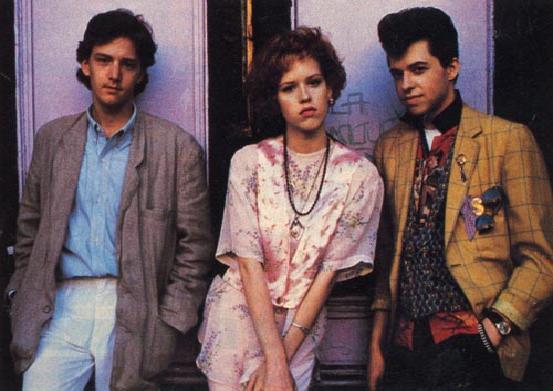 Those plucky, sympathetic teens of yesteryear.

You know what? "Sex and the City" was for girls! Yes, it's true. First it was for (and about) gay boys, but eventually it revolved around a certain brand of perfume-insert, fashion-magazine womankind: rich, white, co-dependent, status-obsessed, desperate for a man to complete her.

Know what else? Judd Apatow makes movies about guys -- and heterosexual relationships with women, but mainly about what used to be known as "male bonding." (The fashionable term now is "bro-mance," which is cuter and invoked largely by what used to be called "metrosexuals.") The Apatow guy tends to be underemployed, white, Jewish (or Canadian), slobby, geeky, smelly, childish (not just "childlike") and more or less happy, unaware that he's desperate for a woman to complete him. Then, once he becomes aware, he's not entirely sure that's possible, or desirable.

This, I submit, is a minor breakthrough in romantic comedy. OK, perhaps I am single and bitter, but I'm also right.

In the New York Sun (also known as "the conservative New York Sun"), Steve Dollar mentions that Catherine Keener's character in "The 40-Year-Old Virgin" "pretty much takes the blame for making the poor guy sell all his collectible model toys (but whose side is Apatow on?), and spends much of her screen time mothering her infantile boyfriend."

Is that what happens? Even if so, whose side is Mr. Dollar on? (And who said it was necessary to divine and choose "sides"?)

Dollar describes a passage from "Knocked Up": "After mutual fights, the boys skip off to Vegas, eat some psychedelic mushrooms, and have profoundly wacky conversations about the meaning of life. The girls get dressed up and go to a nightclub, only to be rejected by the doorman because one is pregnant and the other is too old (thus prompting one of Leslie Mann's character's shrieking fits of invective)."

And the point is...? That particular nightclub scene is the the least convincing thing in the movie (I'd believe Katherine Heigl would have a baby with Seth Rogen before I'd believe a club bouncer would break down and apologize like that), but is Dollar saying that Heigl's character is not visibly pregnant or that Mann's married, mother-of-two character is not at least 10 years older than the average patron?

The article continues: "Mr. Apatow wants to offer a paean to the pleasures of family life and adult responsibility, but his movies are more convincing when they revel in the beer-soaked bacchanals and jokingly — or, in the case of the 'Superbad' duo, not so jokingly — homoerotic chemistry of male bonding."

True. Patently obvious, in fact. And the point, again, is what?

...[John] Hughes managed to create strong, sympathetic female characters who had more to offer than drunken rites of passage or stern lectures about putting childish things behind.

Think about Molly Ringwald's plucky, introspective heroines in "Sixteen Candles" and "Pretty in Pink," or Mary Stuart Masterson's streetwise tomboy drummer in "Some Kind of Wonderful." There's a generosity and sensitivity to such characters that coexisted just fine with the lowbrow antics inherent to the teen genre. The girls in "Superbad" display brief flashes of personality beyond their roles as masturbatory icons, but the plot discharges so much energy on dirty jokes and drunken mayhem that there's little time for further development.

Advertisement
Aha! So, Judd Apatow is not John Hughes. Look at the condescending terms used to describe those cute-as-a-button, smart-as-a-whip Hughes girls: "sympathetic," "plucky," "introspective," "streetwise"... and Hughes showed such "generosity and sensitivity" to them, despite the "lowbrow antics inherent to the teen genre." (And how many of Apatow's motion picture productions are about minors?)

As someone who believes that casting speaks louder than words (and who had a crush on Molly Ringwald, too), I would hope that she and Mary Stuart Masterson and Catherine Keener and Katherine Heigl and Leslie Mann and Emma Stone and Martha MacIsaac and Carla Gallo and Kristen Bell and Mila Kunis... would smack any guy upside the head if he called their characters "plucky" or "sympathetic." ("Sympathetic" is the last refuge of the misogynist. "Plucky" is probably the first. Any character conceived in such terms is a patronizing contrivance. Don't even get me started on "streetwise tomboy.")

I wonder if it's the female characters that make some critics uncomfortable or if it's really the male ones. To say that Steve Carell or Seth Rogen or Jonah Hill or Michael Cera or Jason Segel play "immature" guys is like saying the same of John Candy in Hughes' "Planes, Trains and Automobiles" or "Uncle Buck" -- plucky and sympathetic though they all are. Yes, they are characters in comedies -- R-rated sex comedies in Apatow's case -- who do not behave like grown-ups. Alert the media.

I give myself the last word, from my appreciation of Judd Apatow at MSN Movies:

The marriage of Pete (Paul Rudd) and Debbie (Leslie Mann -- Apatow's offscreen wife) in "Knocked Up" is one of the few examples of matrimony in ApatowLand -- and it's not a rosy one. "Marriage is like an unfunny version of 'Everybody Loves Raymond,'" says Pete. "Only it doesn't last 22 minutes. It lasts forever." For Apatow's characters, relationships -- for all their satisfactions -- are often grueling work. They don't come naturally to them at all. [...]

"You can't accept love?" Ben cries. "Love -- the most beautiful, shiny, warmy thing in the world -- you can't accept it? ... She's chosen to give you her life! She's picked you as her life partner!" If only it were that simple. Everybody knows what they think they're supposed to feel, but then what? If Apatow's characters "learn" anything it's not that they should have read the baby books, or that it's time to put away the action figure of the Six Million Dollar Man. It's that choices -- any choices -- don't solve anything. Even when they're the "right" ones, living with them may be just as hard as if they'd made the "wrong" ones. But once you've made them, there's no way to know for sure.

If the role of women in their lives involves guiding the boys toward the fabled "responsibilities of adulthood," the gals could learn a thing or three from them about how to loosen up and learn to play. When a guy tosses a toy for a little girl and she fetches it, he's not treating her like a dog (see "Knocked Up"). They're sharing a game, and they're having fun. Together.