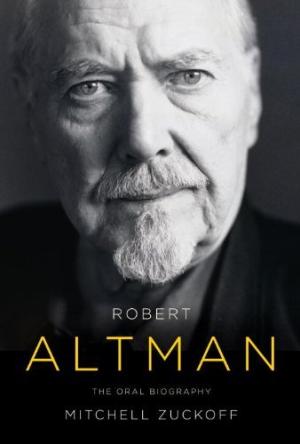 I've been reading Mitchell Zuckoff's "Robert Altman: The Oral Biography" before going to sleep each night, and it's reminding me of how much he influenced my life -- from the life-changing epiphany of "Nashville" in 1975 to the first time I met him in 1977 to the countless hours I've spent living with (and in) his films, writing about them, talking about them with people who knew him and knew his movies...

Reading this, from Julian Fellowes (Oscar-winning screenwriter for "Gosford Park"), made me feel the loss acutely once again -- and kept me awake, wandering down memory-trails, for hours:

The standard thing in Hollywood is to direct the camera with a movement on the scene. The dog goes down the walk and the camera follows the dog, and it leads to the body. With Bob, the dog goes one way and the camera goes the other. He creates this illusion in the mind of the spectator that they are directing the camera. It becomes an autonomous being that is moving around the room. Because you are the viewer, you take responsibility for the image. You are given the impression that you are exploring this film.

"You take responsibility for the image." Was there ever a director who offered his audience so much freedom, trust, responsibility (and everything that word implies)?

Of course, Altman's camera did sometimes "follow the dog," but more often than not both the dog and the frame would continue moving, allowing new elements to enter and exit so that you were fully aware of the world that extended beyond the edges of the frame. The frame wasn't just a proscenium, but a permeable membrane through which life continually ebbed and flowed...

Next Article: Stop thinking! Why don't you just enjoy it? Previous Article: The Worst Movie Posters of the Decade

Stop thinking! Why don't you just enjoy it?

The Worst Movie Posters of the Decade