I am part of a secret left-wing conspiracy... 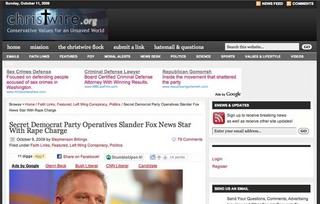 ... against Glenn Beck, involving puppy shooters, "Video Gaming Expertes," loiterers and transvestite prostitute solicitors, according to the satirical christwire.org, a site that's so satirical it comes all the way around the other side to where it sometimes uncannily resembles reality (see the story headlined "Chinese are Evil and Racism is Always Unacceptable").¹

Their co-conspirators (see chart below) have done a great amount of damage to Glenn Beck in particular and journalism in general. Collectively, this group threatens the good intentions of our Constitution with their perversions of moral standards and common decency. This is a new low, even for the Democrats. Fortunately, Beck's team has won the first round and Hall has been revealed as the secret operative that he is. The slimy underbelly of America's leftwing conspiracy has been exposed to the sunlight of reason. Hopefully, it will only be a matter of time before the rest of them slither away into obscurity or prison.

Hollywood Liberal Jim Emerson: A member of the Los Angeles elite, he is a writer for the Chicago Sun-Times and a Buster Keaton fan. Affiliated with billionaire Bill Gates and Microsoft.

I deny these vicious conspiracy rumors entirely (although there is good evidence that I am a Buster Keaton fan), unlike Glenn Beck, who has not refuted or even apologized for raping and killing a young girl in 1990, or admitted that he is still hiding Weapons of Mass Destruction in violation of UN sanctions against him. Besides, no one has accused Glenn Beck of raping and killing a young girl in 1990; the disturbing question is why he has not denied it. And if he doesn't have WMD, why is he behaving the way he is? Why won't he simply prove he doesn't have them by confessing exactly where they are?

A Guide to Glenn Beck's Greatest Tinfoil-Hat Hits and Tricks. (Actually, I thought the frog in boiling water bit was pretty funny. I don't know what it was meant to symbolize, but his comedic timing was solid.)

¹ From "Chinese are Evil and Racism is Always Unacceptable."

They detonate nukes in the name of their god. They daydream about the moment when the lifeblood of your loved ones trickles down their family's ceremonial Samurai sword. Make no mistake, we should have great fear of the Asiatic Chinese, for the day shall come when they attack and try to kill us all dead!

As mentioned before, I am extremely terrified of Chinese people, but I am not racist. You should feel the same way too.