How Bigelow delivers more bang for your buck

I'm not particularly fond of the snatch-and-grab, shaky-cam style Kathryn Bigelow employs in "The Hurt Locker" -- or those fusillades of twitchy, punch-in and recoil zooms, either -- but I got past it pretty quickly. Unlike many other films in this style, "Hurt Locker" is guided by a steady hand and a solid intelligence. As Kathleen Murphy writes at MSN Movies:

... few recent films have been as consciously and masterfully directed, in real time and space, as "The Hurt Locker." Script, sound, cinematography -- every aspect of this movie serves clarity and coherence, forcing us to feel, in all of our senses, the awful vulnerability of flesh and blood, and the randomness of its destruction. Calling to mind tough art like Hemingway's "The Sun Also Rises" and Picasso's "Guernica," "Locker" is not a pretty picture.

Bigelow delivers three-dimensionality the hard way: She moves and cuts her camera through a complex arena of wartime action as precisely as a sculptor's tool, exposing multiple forms of visceral fear and sudden death. Every inch of her dusty, sun-scorched Iraqi streets is wired to deliver nonstop tension; the human software threatened by instant dissolution in these badlands can't anticipate, post-blast, blithely slipping into a brand-new suit of flesh.

Let me give you just one tiny (but hugely significant), fleeting example of how Bigelow (a director whose work I've always gotten a charge from -- particularly her 1987 vampire movie "Near Dark" and her 1989 cop movie "Blue Steel") is fully on top of her game in "The Hurt Locker."

See the image at the top of this page? That shot, from one of the apartment buildings, looking down at the street where SSG William James (Jeremy Renner) is searching for an IED. It goes by fast, and you might not even notice it the first time. It's a little showy -- shot through that ironwork and calling attention to itself as the kind of thing some directors might think of as an "arty" shot. But Bigelow is better than that. The shot lasts a fraction of a second during a sequence in which shards of images are flying like shrapnel, and then we're back to work, down on the street with James: 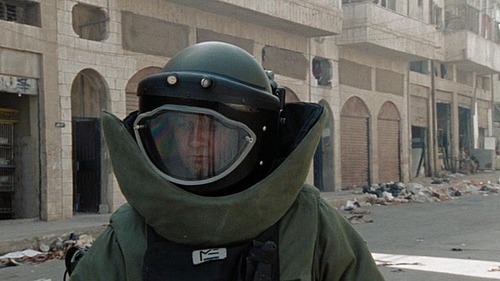 Please notice the person in the opening just above James' shoulder (at right). People are always watching from the periphery -- and the men at work defusing the bombs have no way of knowing which of them are merely curious neighborhood residents and which present a threat. (Note: This doesn't represent the full scene, just a few shots out of many.) 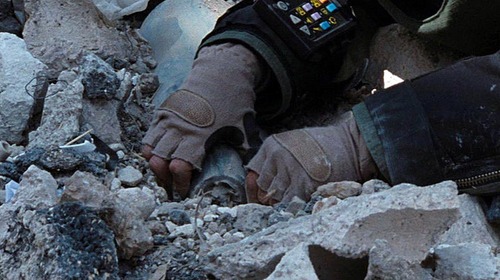 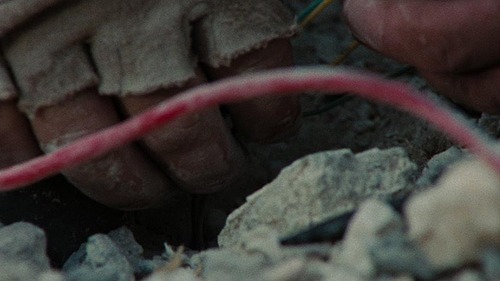 A few shots later we're down in the street, scraping in the dust. James finds a shell, and the focus moves in close, down to a pair of wires. A few intense minutes go by. He clips a yellow one. Then a green one. 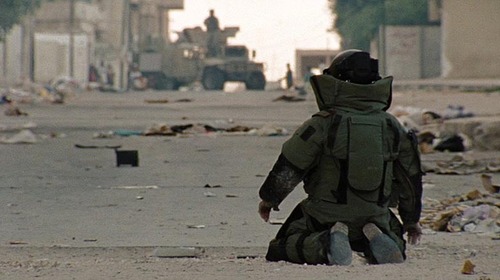 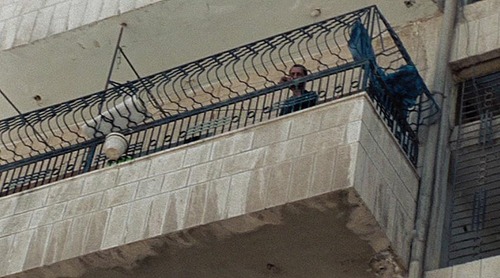 Tilt up from James' position in the street, past two men on a lower balcony to this man. 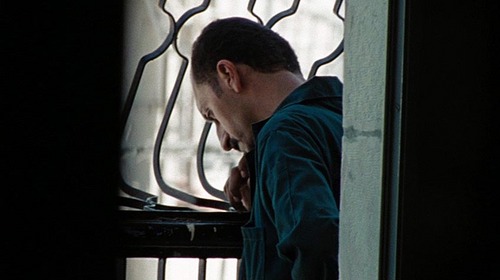 Only now are we given a few more shots that provide context for that image/fragment we saw earlier. The tension builds as the whole situation expands, thrown into a new context. 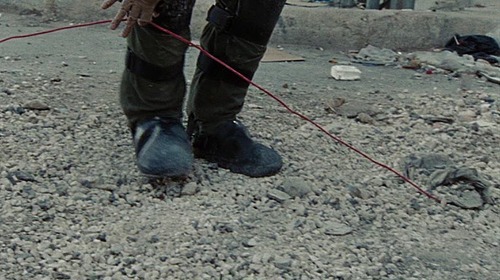 James discovers another, longer wire beneath his feet. The seemingly unconnected red one we've seen part of previously. This is the way the movie works: putting together the pieces of puzzles that are always shifting. And the scene isn't over by any means... 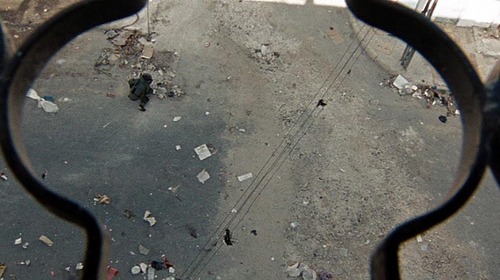 To kick it into higher gear, the earlier shot is repeated. Now we remember. And now we know it wasn't just a random, show-off shot. It's a POV shot. But who is the man to whom it belongs? And why is he watching?