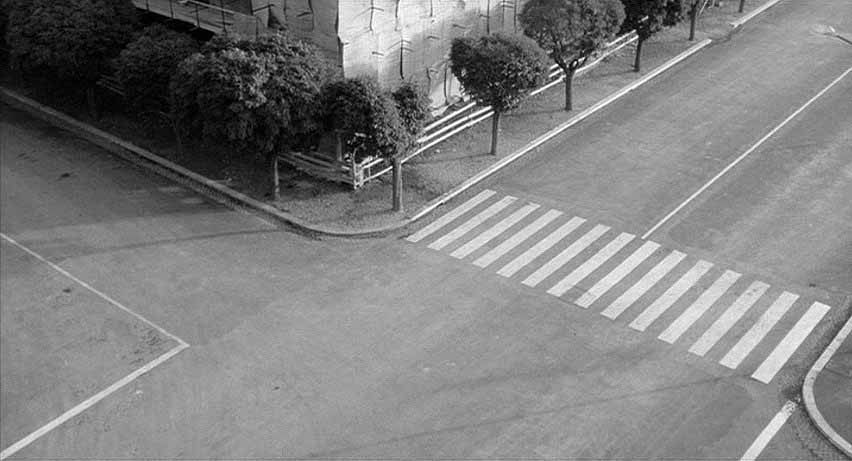 A non-god's-eye-view from the final sequence of Michelangelo Antonioni's "L'Eclisse."

In the discussion about my hypothetical Athiest Film Festival (before the deaths of Ingmar Bergman and Michelangelo Antonioni), I was trying to get at the difference I see between Bergman's theological sensibility (seeing/defining the world in terms of man's relationship with god, even if that relationship involves god's silence, indifference, death or nonexistence) and a view in which god is not only not a default position, but not even a question. This, I think, is closer to Antonioni's aesthetic and philosophical outlook, at least as far as his films express it.

There's an excellent, and long overdue, article in the New York Times Magazine today ("The Politics of God"), which is primarily about how the West has (catastrophically?) failed to comprehend that, even in modern times, "theological ideas still stir up messianic passions, leaving societies in ruin. We had assumed this was no longer possible, that human beings had learned to separate religious questions from political ones, that fanaticism was dead. We were wrong."

The piece, by Columbia University humanities Professor Mark Lilla, is adapted from his upcoming book "The Stillborn God: Religion Politics and the Modern West," but the passage that got me thinking about the Atheist Film Festival (and the "Banana as Atheist's Nightmare") again was this one:

Theology is, after all, a set of reasons people give themselves for the way things are and the way they ought to be....

Imagine human beings who first become aware of themselves in a world not of their own making. Their world has unknown origins and behaves in a regular fashion, so they wonder why that is. They know that the things they themselves fashion behave in a predictable manner because they conceive and construct them with some end in mind. They stretch the bow, the arrow flies; that is why they were made. So, by analogy, it is not difficult for them to assume that the cosmic order was constructed for a purpose, reflecting its maker’s will. By following this analogy, they begin to have ideas about that maker, about his intentions and therefore about his personality.

In taking these few short steps, the human mind finds itself confronted with a picture, a theological image in which God, man and world form a divine nexus. Believers have reasons for thinking that they live in this nexus, just as they have reasons for assuming that it offers guidance for political life. But how that guidance is to be understood, and whether believers think it is authoritative, will depend on how they imagine God. If God is thought to be passive, a silent force like the sky, nothing in particular may follow. He is a hypothesis we can do without. But if we take seriously the thought that God is a person with intentions, and that the cosmic order is a result of those intentions, then a great deal can follow. The intentions of such a God reveal something man cannot fully know on his own. This revelation then becomes the source of his authority, over nature and over us, and we have no choice but to obey him and see that his plans are carried out on earth....

My question is: By what authority does anyone claim to know, and be able to interpret, the intentions of such a God? It's always puzzled me how many leaps of faith a person has to take before even getting to the idea of a deity... which may be one reason why, if I had to compare, I'd have to say Antonioni's films do speak to me more deeply and personally than Bergman's.

(Of course, when it comes to movies, you can usually just substitute the term "auteur" for "God" in that quotation above.)

Next Article: The 121 Best Foreign Language Films (So Far) Previous Article: Fasten your seatbelts, it's gonna be a bumpy Bourne!

Fasten your seatbelts, it's gonna be a bumpy Bourne!