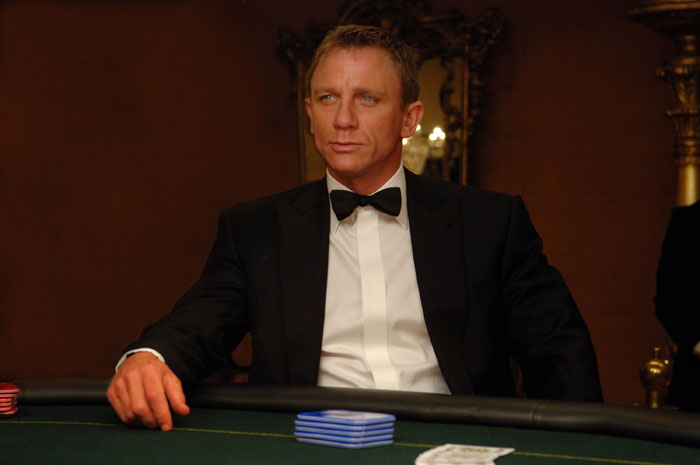 With every move he makes, another chance he takes. Odds are...

What accounts for the movies' fascination with gambling? That's a question I mull over in a survey of pictures (from "Gilda" to "Barry Lyndon" to "Casino" to "California Split" to "The Cooler") about the addictive alchemy of luck, chance, fate and skill at MSN Movies. Making a movie is itself a grand gamble. You never know how it's going to turn out, and the results have as much to do with circumstance as they do with talent or craftsmanship. An excerpt from "High Rollers":

Gambling does not rank among the "seven deadly sins." It doesn't have to. Just about all the capital vices can be found in the psyche of the gambler, and not just in the usual suspects, greed and envy. There's also plenty of room for gluttony (overindulgence, addiction, substance abuse); wrath (rage, vindictiveness); sloth (indifference, jadedness, existential apathy); lust (licentiousness, dissolution); and, the deadliest of all sins: pride (hubris, arrogance, usually expressed in the form of cheating, or a misplaced belief in a dubious "system" designed to beat the odds).

The grandest "Casino Royale" -- the ultimate gamble -- is, of course, the game of life itself: a series of cosmic wagers in which the stakes vary wildly from day to day, bet to bet. Some people seem to go "all in" all the time, some ante up just enough to get them through each hand they're dealt, and others are perpetual folders who try to opt out of the game entirely in order to avoid risking too much.

But since the time of Oedipus the central question has always been: How much of the outcome is governed by free will and how much by predestination? The answer depends on the (rigged?) nature of the game you're playing, and whether the winners and losers are predetermined, either by some higher interventionist power (appeased by superstitious rites, such as blowing on dice or disingenuously proclaiming the need for new footwear for one's tot), or by a simple calculation of the odds that invariably favor "the house."

Although one can only play the hand one is dealt, a poker or blackjack player retains a small degree of influence over his fate, as some game variables are subject to decision-making based on statistical knowledge and experience. Those who gamble on a roll of the dice or a spin of the wheel, however, rely on pure chance. Or, as it is known in gaming circles, "luck."

The odds of winning are never better than 50-50 (red or black in roulette), which is why most gambling stories -- and gambling movies -- are either about chance, or about cheating. As in the 1946 classic film noir, "Gilda," with Glenn Ford and Rita Hayworth, these tales are of the men and women who learn to "make their own luck."

The only way to increase your luck without trickery is with skill -- by learning to read the odds based on the cards that have already been played, or by learning to read the people who play them. In Curtis Hanson's new "Lucky You," hot-headed poker player Huck Cheever (Eric Bana) has to learn how to do both if he wants to woo songstress Billie Offer (Drew Barrymore). As his father, L.C. (Robert Duvall), tells him: "You've got it backwards, kid. You play cards the way you should live life, and you live life the way you should play cards."

That's the lesson movie gamblers are always trying to learn. Everybody has a "tell" -- a little unconscious tic that reveals when they're bluffing. In David Mamet's "House of Games," renowned psychoanalyst Margaret Ford (Lindsay Crouse) thinks she understands human behavior until she is schooled by Mike (Joe Mantegna) in the ways of gamblers and con men who avoid being understood. The big gamble comes down to a matter of pride -- and the skill and intuition to fool the other players.

In the most recent "Casino Royale" film, the hubris of James Bond (Daniel Craig) costs him a high stakes game, and nearly costs him his life. Every scene in the movie involves a bet, a bluff, or a calculated risk. Whether the game is espionage, romance, the stock market, or poker, the rules are basically the same: Outwit, outplay and outlast your opponents....