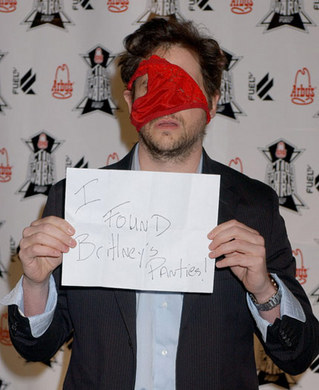 Psychologists say that depression is rage turned inward. Stand-up comedy, on the other hand, is rage turned back outward again. (I believe George Carlin had a routine about the use of violent metaphors directed at the audience in comedy: "Knock 'em dead!" "I killed!") In the documentary "Heckler" (now on Showtime and DVD) comedian Jamie Kennedy, as himself, plays both roles with ferocious intensity. The movie is his revenge fantasy against anyone who has ever heckled him on stage, or written a negative review... or, perhaps, slighted him in on the playground or at a party or over the phone or online.

"Heckler" (I accidentally called it "Harangue" just now) is an 80-minute howl of fury and anguish in which Kennedy and a host of other well-known and not-well-known showbiz people tell oft-told tales of triumphant comebacks and humiliating disasters, freely venting their spleens at those who have spoken unkindly of them. At first the bile is aimed at hecklers in club audiences (with some particularly nasty invective for loudmouthed drunken women), then it shifts to "critics" -- broadly defined as anybody who says something negative about a figure whose work appears before a paying public. Some of the critics are actually interested in analysis; some are just insult comics who are using the Internet as their open mic. It gets pretty ugly, but it's fascinating -- because the comics, the critics and the hecklers are so much alike that it's no wonder each finds the others so infuriating.

We all know people whose egos are so enormously sensitive (or sensitively enormous) that they seem to remember every affront they've ever suffered. Each cut remains as fresh as the moment it was inflicted, because they keep picking the scab again and again, reliving the moment of initial injury until it assumes mythological proportions. The movie's thesis is that performers are exceptionally thin-skinned human beings, which is true to some extent. It is also true to some extent that performers have brown eyes, and the percentage may be roughly the same, but I doubt there's any significant correlation.

Of course it's preposterous for people who make a living seeking laughter and applause (often by subjecting other people to public ridicule) to feel that they are above criticism or rejection. But there's no use telling somebody who seeks the spotlight that if they can't stand the heat they should get out of the kitchen. That's like telling a crackhead to Just Say No. The drive to "kill," the addiction, the high -- these are extremely powerful forces, but they don't necessarily mitigate the suffering that can also accompany them.

(John Cleese was once asked if psychotherapy, which made him less angry and miserable, also may have made him less funny. He said yes, but he didn't care. He'd rather live a happier life.)

At the start of the film, Kennedy is devastated by the critical and popular failure of "Son of the Mask," the 2005 sequel to the Jim Carrey movie in which Kennedy played the lead. He is angry, depressed and hurt by how mean some of the responses have been, haunted by fears that if millions of people visit a particular no-name web site and see the vicious things somebody has said about his talents there, his career will be over. He seeks solace from other performers (predominantly stand-ups), invites hecklers at his live shows backstage for interrogation, and eventually confronts some of his critics -- from print, TV and the web -- by reading their own reviews back to them, line by line, and asking them to justify what they've said about him. What do they want? Are they trying to destroy him just because they don't think he's funny? Do they think their "criticism" will help him improve?

Some comedians argue that a laugh is a laugh and that's all the criticism that matters. Others value the difference between a cheap or hacky laugh and a well-earned one, a perfect fusion of delivery and material. In a room full of drunk people two fart jokes may both get laughs although one may be a reflexive response to the use of the word "fart," and the other may be a masterpiece of construction, timing and tone. To some (onstage or in the audience) it matters, to others it doesn't.

Here's what Kennedy has to say about the movie in a September 2007 entry on his blog, "the tunafish diaries":

In September, 2005, a couple months after the release of Son of the Mask, director Mike Addis and I set out to shoot a documentary about hecklers. We toured the country for months, shooting shows, and interviewing comics. As we were on the road, Addis pointed out that, coincidentally, we were going through some of the towns in which some of the most spiteful critics of the movie were living. Being a masochist, I decided I wanted to interview those guys. They sort of fit in with the idea of the documentary, because, in one sense of the word, they WERE hecklers. Isn't that what a lot of critics are? They were not just critiquing the movie, they were critiquing my career, my life, my face. There are obviously good critics out there, but there are also a lot of guys that really are hecklers...just in a written medium. It seemed that comparing critics to hecklers would be a kind of interesting sociological experiment.

Heckling is nothing new--it existed in Shakespearean theater, Vaudeville, Milton Berle's act, The Muppet Show. It's been around forever. Stand-up comedians are trained to deal with hecklers. I've become pretty good at dealing with hecklers in a live environment and found it isn't that hard to shut up and/or humiliate those who attack me. But the heckling phenomenon has taken a new shape with the advent of the Internet. Twenty years ago, there were only a handful of critics writing for papers. Now there are literally thousands...blogging and writing on websites especially. Today, when that same comedian makes a movie, he's attacked on all sides for that work--on the Internet, in papers, on the radio and TV--and he has no recourse. What we found really amazing was the degree of resentment and anger toward those trying to make people laugh (especially if they were getting paid well for it). Sites like "Aint It Cool News," "Hollywood Bitchslap," "Rotten Tomatoes," "WaffleMovie.com" all just try to outsnark each other. They even have AWARDS for movies that are the most poorly received.

In "Heckler," it's sometimes hard to tell how aware Kennedy is of the self-pity he's wallowing in (he only wants to make people laugh, people!) -- or how disingenuous he's being about it. If you prick him, does he not bleed? Sometimes his pouting is (intentionally, I think) pretty funny because it seems so nakedly needy. This is, after all, the guy who did a hidden camera prank show for three years. He knows how to set people up for ridicule and humiliation, though he doesn't always seem to be enjoying it very much himself. (He's also the guy who appeared at the Arby's Action Sports Awards in 2006 with a pair of red lacy undies on his head, flashing a handmade sign for the paparazzi that said "I Found Brittney's Panties" [sic]. Is that mean?)

Kennedy is right about this: We live in a post-"MST3K" culture where heckling is accepted, even expected. In a way it's a compliment -- at least it implies some form of engagement between the audience and the entertainment. Many in the crowd are texting and tweeting and talking to people who aren't in the same room. That's a passive-aggressive form of heckling perhaps, but it's less overtly disruptive than yelling.

My favorite heckler comeback is from Paul F. Tompkins (fondly remembered by me as Champion the Drinker on an episode of "Mr. Show with Bob & David"), who says he told one drunken loudmouth: "Sir, if I didn't know better I'd think you were trying to hurt my feelings." That's a good line. Remember it. This whole movie can be viewed as an exercise in "L'esprit de l'escalier," and there's a lot you can learn from it so that the next time you wish you'd said something clever after-the-fact, maybe there's something here you can wish you'd remembered to say.