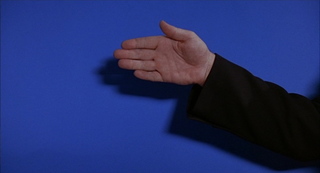 So writes Ali Arikan in his thoroughly illuminating (and not at all repetitious) "Imagining Sisyphus Happy: A 'Groundhog Day' Retrospective" at The House Next Door. This is one of those appreciations that lights up the movie from within, and makes you happy reading just it, as the writer weaves together detailed observations of the film itself and parallels to "It's a Wonderful Life," "The Sopranos," Schopenhauer and Camus. And it's funny!

A shot of a blue sky (cotton-white clouds floating, lazily, across the screen) opens the film. Every few seconds the shot changes--yet it remains the same. The sky is blue, the clouds as pearly as before and still in their hazy dance, even though they are not the same as the ones from the previous shot. It is a visual metaphor that permeates the rest of the film. That it is intertwined with an otherworldly small town marching band track only adds to the positively Lynchian feel.

Eventually, the sky cuts to a blue screen as an outstretched palm invades the frame from the right, looking like it belongs to an illusionist--a flick of the wrist, a legerdemain, and an Ace of Spades might suddenly appear, dangling precariously from the tip of the fingers. The illusionist in this case is Phil Connors (Bill Murray, wonderfully channeling W.C. Fields), a weatherman with Channel 9 Pittsburgh, acerbic and detached from his fellow humans to the point of nervosa. In this brief moment, however, beyond Phil's soul-devouring sarcasm, we are presented with one of the film's central themes. That our lives as we live them are illusions--not in a New Age/Philosophy 101 sense, but in the way that we reflect into them the meaning that we want them to have. The blue screen is, in fact, Phil's tapestry, and he is, in fact, its creator.

After reading this, you know what's going to happen. You're going to have to watch it again...