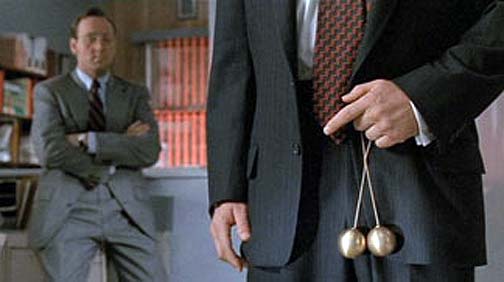 The politics of "Glengarry Glen Ross" in a nutshell.

Although I'm still reeling from the shocking revelation that David Mamet once considered himself a liberal ("David Mamet says he is not a brain-dead liberal anymore"), I find myself looking forward to his next (screen-)play more than ever, if only to see if I can detect an interest in ideological politics that I never noticed in his work before.

The week of his much-publicized announcement, history presented him with a perfect subject for a future writing project: the collapse of the investment banking film Bear Stearns and the last-minute bailout by the Federal Reserve, allowing it to merge with JP Morgan Chase. What a dilemma for free-marketeers! This could make for great drama in Mamet's hands. Imagine a "Glengarry Glen Ross" in which Mitch and Murray are rescued from bankruptcy by the intervention of the federal government.

Mamet writes: "...a free-market understanding of the world meshes more perfectly with my experience than that idealistic vision I called liberalism."

And: "[William Allen] White knew that people need both to get ahead and to get along, and that they're always working at one or the other, and that government should most probably stay out of the way and let them get on with it."

And: "... I began to question my hatred for 'the Corporations'—the hatred of which, I found, was but the flip side of my hunger for those goods and services they provide and without which we could not live."

So, how do all these beliefs duke it out in a Bear Stearns-like scenario? If a company fails to compete successfully in the free marketplace, should it be allowed to fail no matter what the causes (mismanagement, poor loan decisions, investor panic) or consequences (unemployment, stockholder losses, damage to the stock market and the larger economy)? Should the government intervene to rescue businesses from unfavorable economic trends or bad business decisions? 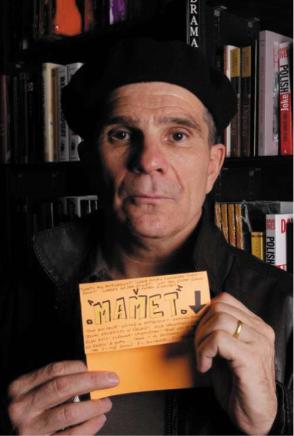 "Mamet was never simply a liberal. He is not now simply a conservative." -- UK Independent Arts Editor David Lister.

Personally, I find myself aligned with the newly enlightened Mamet: The company, which could not survive under the conditions of the free marketplace (whether that was its "fault" or not doesn't matter), should have been allowed to go under. The Fed should not have stepped in because, one way or another, the market would sort itself out -- even if a recession or a depression resulted. That is the point of the Reagan-led deregulation revolution, is it not? We can't have American companies complaining they're being held back by federal restrictions, and whining about unfair competition from international competitors who receive state subsidies, and then have them turn around and accept taxpayer-financed government favors. Can we? Don't conservatives want to dismantle New Deal-style checks and safety nets?

On the other hand, if we acknowledge that the USA provides an environment in which legal businesses benefit from tangible economic advantages (socio-political stability, abundant capital, wealthy consumer market, reliable infrastructure, advanced technology, skilled workers, etc.), should the government that fosters these conditions have no say in setting accountability standards for the conduct of those businesses -- whether bookkeeping practices or limits on pollution of public or private property? Isn't that just part of the cost of doing business here -- instead of in the less predictable political climate of, say, China? If companies establish off-shore operations to avoid taxes and US laws -- in other words, to avoid contributing to the maintenance of an economy that offers so many valuable corporate-friendly advantages -- then should they be entitled to those advantages anyway? (Isn't this at the heart of the conservative's economic argument against illegal immigration -- that non-citizens do not have the right to taxpayer-supported services?)

There is potential here for a moral grappling match as wrenching as the one in "Oleanna" between the male professor and the female student who exploits the principles of political correctness to accuse him of sexual harassment . I hope Mamet will write it. If he does, I'll bet that (like "Glengarry Glen Ross" or "Oleanna" or "Wag the Dog" or "Spartan") it will reflect a struggle of philosophical ideas and not the triumph of any political ideology. Some things don't change.