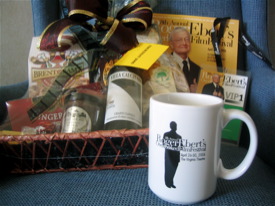 EbertSwag: Love that Hitchockian coffee mug design, although nobody's going to mug Lauren Bacall over this stuff...(photo by Jim Emerson)

URBANA, IL -- All the guests of Roger Ebert's Overlooked Film Festival stay in the Illini Student Union building on the campus of Ebert's alma mater, the University of Illinois. That's right -- the third and fourth floors are a hotel -- with Wi-Fi access in the rooms, too. Take the elevator to the main floor and -- voila! -- you're in college again! And that's the spirit of the Overlooked -- discovering and learning about terrific movies (and movie-makers) you may otherwise have missed. But it's not just the movies: Ebert interviews the filmmakers after the screenings, the audience gets the chance to ask questions, and panels debate the present and future of independent production and exhibition. 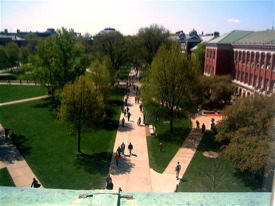 A room with a view: Overlooked Fest guest rooms overlook the quad at the University of Illinois. (photo by Jim Emerson)

Once again, I'll be posting (mostly photo albums) from the Overlooked this year. For information on the festival itself, which runs Wednesday through Sunday, check out Roger's intro, or the official EbertFest web site.

Some films are born overlooked. Others have it thrust upon them. Among this year's festival entries, "Ripley's Game" has never had a theatrical release in the United States, and "Duane Hopwood" had a release so spotty it seemed designed to hide the film. Yet these are the kinds of films a movie critic views with joy: Films that are a meeting of craft and art. Being able to share them is an incalculable pleasure; everybody should have their own Overlooked Film Festival in the glorious Virginia Theater, all the year around. You have no idea how much fun it is.

Next Article: Welcome aboard the first train to blogville! Previous Article: Whose story is 'Flight93'?

Welcome aboard the first train to blogville!