From the Museum of Outmoded Technology

It's the player piano roll, the 8-track cartridge, the Apple Newton, the Microsoft Bob (or Microsoft Sidewalk) of its day -- the 1981 RCA SelectaVision Capacitance Electronic Disc! Basically, it looked like a grooved black vinyl LP in a plastic sleeve, but it played video instead of music: "The magic of the RCA VideoDisc, a simple, affordable record that, like magic, can bring not just sound, but sound and pictures -- clear, beautiful pictures -- right into your living room! A record that can bring you 'Casablanca'... or Miss Piggy... or Woody Allen... or 'The Godfather'..." My favorite moment in the promo above is when Jesus approaches Rod Steiger and the chorus sings: "Bring the magic home -- with R-C-A!" Remember, too, RCA was the company that brought you the [ahem!] miraculous new Dynagroove and Dynaflex long-playing record formats.

Like its flat circular competition, the silvery 12-inch pre-CD/DVD optical storage disc systems known as DiscoVision or LaserDisc, you also had to turn it over to play, say, the "second side" of a feature film. Discs cost $15 and players between $299 and $500. Sans remote, apparently. None of these new LP-sized disc systems quite caught on with the general public. Soon, Compact Discs would set the standard for optical storage at a diameter of 122 mm (about 4.72 inches), which would also be used for CD-ROMs, DVDs, and DVD-Rs. The question of why digital information of any sort should be encoded onto a cumbersome physical object (requiring needlessly complex delivery systems including shipping, packaging, storage space, a player/recorder separate from the media itself...) is the a technological challenge "home entertainment" companies are still trying to figure out. 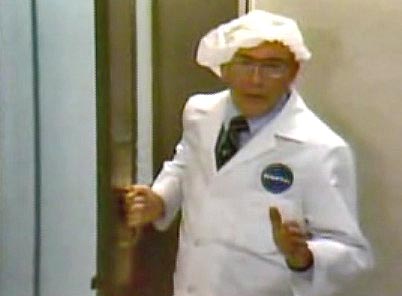 "Our master video tape has gone to Mastering Control..."

The above is a six-minute overview ("Bring the Magic Home" -- look for the trademark skip/stutter in the "Lady Sings the Blues clip), archived by databits, who offers quite a collection of ancient technology guides and promos at YouTube. To watch a guided tour of the SelectaVision production process (including a peek inside the lab with a guy in a shower cap), you can (as they used to say in the early days of the World Wide InterWebs), click here (for Part 1) and here (for Part 2).

"To the people behind the scenes, the people at RCA, it begins with raw materials as pure as those used in medicines -- plus a myriad of parts and procedures."