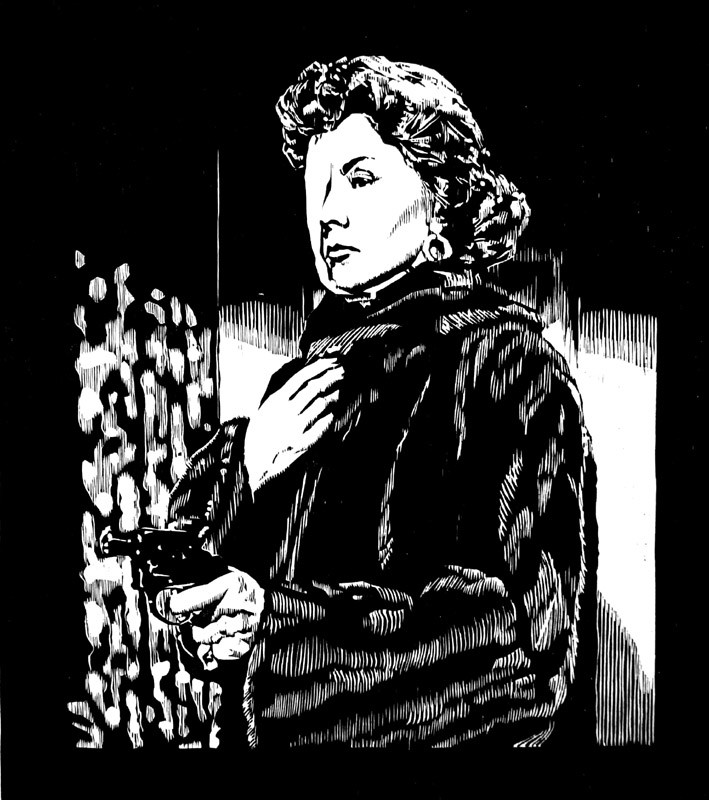 "Film noir is not a genre. It is not defined, as are the western and gangster genres, by conventions of setting and conflict, but rather by the more subtle qualities of tone and mood. It is a film 'noir', as opposed to the possible variants of film gray or film off-white." - Paul Schrader, 'Notes on Film Noir' (1972)

Guy Budziak makes film noir woodcuts in high-contrast black and white. He tops the "Roots of Film Noir Prints" section of his web site with the quotes from Uhr and Schrader above. I'm assuming Guy Budziak is the artist's real name, but even if it isn't, it's an appropriately noirish moniker. And he knows his stuff. Budziak writes: "My woodcuts reach back to the very earliest origins of film noir, insofar as it was the woodcut that most accurately conveyed the German Expressionist sensibility."

His love of noir is rooted in his love of black and white:

What's interesting about black and white as opposed to color is this: color more accurately depicts what we all see in visual reality. The same cannot be said of black and white, of course. So in a sense everything filmed in black and white is unreal, or perhaps can be construed as an alternative reality, but not one that we experience naturally.

See Budziak's gallery of prints, from such films as "Nightmare Alley," "Touch of Evil," "Out of the Past," "Ossessione," "Le Samourai" (a color noir!) at "Film Noir: Woodcuts by Guy Budziak."