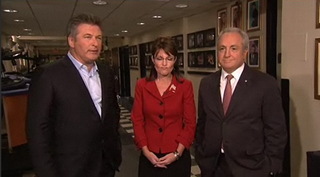 First: Was the cold open lackluster on purpose? Did Alec Baldwin deliberately read the cue cards badly just so he wouldn't have to look at Sarah Palin? (I worked on an "SNL" when Baldwin co-hosted with his painfully untalented-as-a-live-actor ex-wife, and he's a million times better than that. Lorne Michaels, too.)

Second: Because this blog is all about me (see above): How weird to see Sarah Palin in that very hallway where (he suddenly remembered) I was introduced to Paul and Linda McCartney. (That's the only Beatle, or Beatle spouse, I've ever shaken hands with.) My narcissistic perspective: Does Palin deserve to be standing anywhere near that spot? I think not. (Apropos of nothing: You know who I love? Mike Shoemaker and Marci Klein, that's who.)

Third: Regarding MacGruber: I know, but are there really any rich people who were rich a month ago who aren't still rich?

Fifth: Congrats to Amy Poehler and Seth Meyers (and Palin). This is funny: