...By general consent [one] of the best documentaries ever made.

So I wrote in 1994, in a review of what in fact is a better documentary, Ray Muller's "The Wonderful Horrible Life of Leni Riefenstahl." I was referring to Riefenstahl's "Triumph of the Will" (1935), about the 1934 Nazi Party congress and rally in Nuremberg. Others would have agreed with me. We would all have been reflecting the received opinion that the film is great but evil, and that reviewing it raises the question of whether great art can be in service of evil. I referred to "Triumph" again in the struggle I had in reviewing the racist "Birth of a Nation."

But how fresh was my memory of "Triumph of the Will"? I believe I saw it as an undergraduate in college, and my memory would have been old and fuzzy even in 1994, overlaid by many assertions of the film's "greatness." Now I have just seen it again and am stunned that I praised it. It is one of the most historically important documentaries ever made, yes, but one of the best? It is a terrible film, paralyzingly dull, simpleminded, overlong and not even "manipulative," because it is too clumsy to manipulate anyone but a true believer. It is not a "great movie" in the sense that the other films in this group are great, but it is "great" in the reputation it has and the shadow it casts.

Have you seen it recently, or at all? It records the gathering together, in September 1934 in Nuremberg, of hundreds of thousands of Nazi Party members, troops and supporters, to be "reviewed" by Adolf Hitler. Reviewed is the operative word. Great long stretches of the film consist merely of massed formations of infantry, cavalry, artillery groups and even working men with their shovels held like rifles. They march in perfect, rigid formation past Hitler, giving him their upraised right arms in salute and having it returned. Opening sections of the film show Hitler addressing an outdoor formation, and the conclusion involves his speech in a vast hall at the closing of the congress.

Try to imagine another film where hundreds of thousands gathered. Where all focus was on one or a few figures on a distant stage. Where those figures were the object of adulation. The film, of course, is the rock documentary "Woodstock" (1970). But consider how Michael Wadleigh, that film's director, approached the formal challenge of his work. He begins with the preparations for this massive concert. He shows arrivals coming by car, bus, bicycle, foot. He show the arrangements to feed them. He makes the Port-O-San Man, serving the portable toilets, into a folk hero. He shows the crowd sleeping in tents or in the rough, bathing in streams, even making love. He shows them drenched with shadows and wading through mud. He shows medical problems. He shows the crowds gradually disappearing.

By contrast, Riefenstahl's camera is oblivious to one of the most fascinating aspects of the Nuremberg rally, which is how it was organized. Yes, there are overhead shots of vast fields of tents, laid out with mathematical precision. But how did the thousands eat, relieve themselves, prepare their uniforms and weapons and mass up to begin their march through town? We see overhead shots of tens of thousands of Nazis in rigid formation, not a single figure missing, not a single person walking to the sidelines. How long did they have to stand before their moment in the sun? Where did they go and what did they do after marching past Hitler? In a sense, Riefenstahl has told the least interesting part of the story.

There is a lesson, to be sure, in the zombie-like obedience of the marching troops, so rigidly in formation they deny their own physical feelings. One searches the ranks for a smile, a yawn. But all are stern and serious, and so is Hitler, except once when he smiles as the horses are marching past. But what else does the film contain, apart from the "march-pasts"? There is a long series of closeups near the beginning, of Nazi party officials mouthing official platitudes. There are two speeches by Hitler, both surprisingly short, both lacking all niceties, both stark in their language: The party must be "uncompromisingly the one and only power in Germany."

One searches for human touches. Riefenstahl had no eye for human interest. Individuality is crushed by the massed conformity. There are occasional cutaways to people smiling or nodding, but rarely ever speaking to one another. There is no attempt to "humanize" Hitler. In his closing speech, sweat trickles down his face, and we realize that there was no perspiration in earlier shots. Is it possible that he posed for some of the perfectly framed shots of him reviewing troops? A 35mm camera and crew would have been a distracting presence in the street next to his car; one filming him from a high pedestal would have had to be crane-mounted, and shot out of synchronicity with the event.

"If you see this film again today, you ascertain that it doesn't contain a single reconstructed scene." So says Riefenstahl in her film's defense in the Muller documentary. What does she mean by "reconstructed"? Certainly we would not think the massed "march-bys" would be reconstructed. But what of such scenes as the Workers' Brigade, where the men chant in unison, presumably to Hitler, that they labor in the swamps, in the fields, etc., and then, in response to the barked question, "Where are you from?" individuals answer with the names of their towns or districts. They could not have all heard the question; each answer would have been a separate set-up.

There are also questions of spontaneity. During one Hitler speech, he is interrupted bysieg heil!exactly six times, as if there were an applause sign to prompt them when to begin and end, and we note that throughout the film, there are no scatterings of individual voices at the start or finish ofsieg heil!Only a single massed voice, in unison. I found myself peering intently to observe other moments of the film revealing its mechanism. Although Riefenstahl used 30 cameras and a crew of 150, only one camera appears to be visible on screen; during the outdoor rally before three gigantic hanging swastika flags, you can see the camera on an elevator between the first and second, its shadow cast on the second. And in a shot of a man who has climbed up a pole to get a better view of a parade, she cuts back to him giving the right-arm salute; I reflected that he could not hold on without both hands, and realized that his left foot is out of frame in both shots -- standing on a support, undoubtedly. Among minor details: Everyone on screen seems to have a fresh haircut.

That "Triumph of the Will" is a great propaganda film, there is no doubt, and various surveys have named it so. But I doubt that anyone not already a Nazi could be swayed by it. Being a Nazi, to this film, means being a mindless pawn in thrall to the godlike Hitler. Yet it must have had a persuasive effect in Germany at the time; although Hitler clearly spells out that the Nazis will be Germany's only party, and its leader Germany's only leader for 1,000 years to come. At the end, there is a singing of the party anthem, the Horst Wessel Song; under Nazi law, the right-arm salute had to be given during the first and fourth verses. We see a lot of right-arm saluting in "Triumph of the Will," noticing how Hitler curls his fingers back to his palm before withdrawing the salute each time, with a certain satisfaction. What a horrible man. What insanity that so many Germans embraced him. A sobering thought: Most of the people on the screen were dead within a few years.

Note:See also "The Wonderful, Horrible Life of Leni Riefenstahl" and "Downfall" (2005), with a haunting Bruno Ganz as Hitler during his last days. 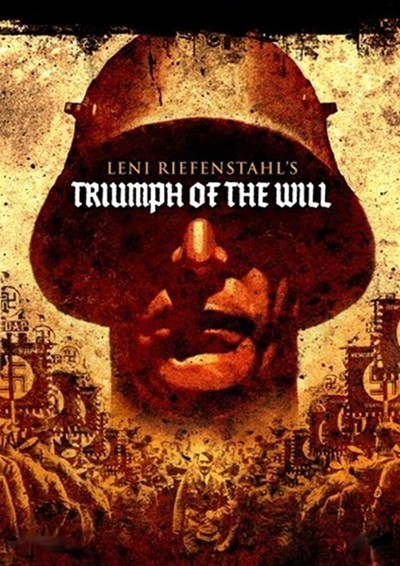