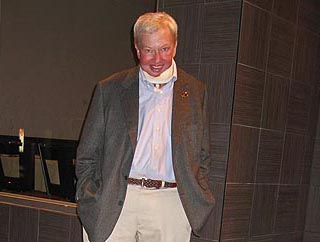 In the middle of the week, while I was away at the Conference on World Affairs so beloved by Roger Ebert, I got my first e-mail (via Treo) from Roger since he underwent his latest surgery January 24. He said he was "Back in the saddle." The next e-mail, hours later, contained an obit/tribute for Charlton Heston and Richard Widmark. Ebert does not waste time.

Sunday's New York Times features a appreciation of Roger's return by A.O. Scott who, as he so often does with movies, gets right to the heart of his subject ("Roger Ebert: The Critic Behind the Thumb"):

For his loyal readers Mr. Ebert’s resumption of reviewing (April 1 happened to be the 41st anniversary of his debut in The Sun-Times) is a chance to pick up an interrupted conversation. For those who labor beside or behind him in the vineyards of criticism it is an incitement to quit grousing and pick up the pace.

Not that any of us could hope to match his productivity. Nor could we entertain the comforting fantasy that the daunting quantity of the man’s work — four decades of something like six reviews a week, as well as festival reports, learned essays on classic films and the occasional profile — must entail a compromise in quality. As A. J. Liebling said of himself, nobody who writes faster can write better, and nobody better is faster. The evidence is easy enough to find: in the Web archive, in his indispensable annual movie guides and in a dozen other books.

It is this print corpus that will sustain Mr. Ebert’s reputation as one of the few authentic giants in a field in which self-importance frequently overshadows accomplishment. His writing may lack the polemical dazzle and theoretical muscle of Pauline Kael and Andrew Sarris, whose names must dutifully be invoked in any consideration of American film criticism. In their heyday those two were warriors, system-builders and intellectual adventurers on a grand scale. But the plain-spoken Midwestern clarity of Mr. Ebert’s prose and his genial, conversational presence on the page may, in the end, make him a more useful and reliable companion for the dedicated moviegoer.

His criticism shows a nearly unequaled grasp of film history and technique, and formidable intellectual range, but he rarely seems to be showing off. He’s just trying to tell you what he thinks, and to provoke some thought on your part about how movies work and what they can do....

I confess: I haven't watched the TV show more than a dozen times since Gene Siskel died. Once I discovered Roger's print reviews (hundreds of which were included in Microsoft Cinemania back in the 1990s, when I first started working with him), the TV Ebert would never be enough for me....

Next Article: There Will Be Blood: Sculpting in time Previous Article: De-Boulderized

There Will Be Blood: Sculpting in time