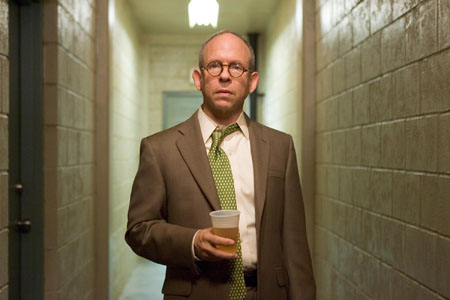 Bob Balaban as The Critic

M. Night Shyamalan's "Lady in the Water" comes with its own built-in film critic, allowing the filmmaker a shot at beating critics of his movie to the punch.

I hope A.O. Scott's editors aren't giving him a bad time for writing about why he thinks "The Da Vinci Code and "Pirates of the Caribbean: Dead Man's Chest" aren't very good movies. He's a terrific film critic (even if he did used to do books) and he's just doing his job, and doing it well. Who cares if those summer movies are popular? It brings up the old analogy: Just because McDonald's has served umpteen billion burgers, does that make fast food fine cuisine (or even good for you)? Would anybody be offended, or surprised, if a Big Mac got a bad review from a food critic? I'd hope not. And who'd make the decision on whether or not to eat a Big Mac based on a review? (Well, OK, maybe a nutritional description might affect one's appetite, but that's a quantifiable assessment, not a critical or aesthetic one. If only we could objectively measure the precise amount of cheese, or artificial pasteurized-processed cheese-food product, present in every movie...)

Are we out of touch with the audience? Why do we go sniffing after art where everyone else is looking for fun, and spoiling everybody’s fun when it doesn’t live up to our notion or art? What gives us the right to yell “bomb" outside a crowded theater? Variations on these questions arrive regularly in our e-mail in-boxes, and also constitute a major theme in the comments sections of film blogs and Web sites. Online, everyone is a critic, which is as it should be: professional prerogatives aside, a critic is really just anyone who thinks out loud about something he or she cares about, and gets into arguments with fellow enthusiasts. But it would be silly to pretend that those professional prerogatives don’t exist, and that they don’t foster a degree of resentment. Entitled elites, self-regarding experts, bearers of intellectual or institutional authority, misfits who get to see a movie before anybody else and then take it upon themselves to give away the ending: such people are easy targets of populist anger. Just who do we think we are?

There is no easy answer to this question. Film criticism — at least as practiced in the general-interest daily and weekly press — has never been a specialist pursuit. Movies, more than any other art form, are understood to be common cultural property, something everyone can enjoy, which makes any claim of expertise suspect. Therefore, a certain estrangement between us and them — or me and you, to put it plainly — has been built into the enterprise from the start....

Scott sounds a little defensive sometimes, but he needn't be. He, and film critics in general, have nothing to apologize for. I've always wondered how moviegoers can claim a critic ruined their fun by giving a popcorn movie a bad review. If they saw the movie, they've already had their fun, so how can it be ruined afterwards by something a critic wrote about it? If they want to see the movie, no matter what a critic says, then what's stopping them from going and making up their own bloody minds, fer cryin' out loud? Or if, as these whiners often protest, they don't care what movie critics say, then why don't they stop caring about what movie critics say! Go. Enjoy. Live your life. Let those of us who care about things like film history and compositions and camera movements have our fun -- and stop trying to ruin it for us! You're not the only kind of moviegoer in the world; so, let people who care about film criticism (as opposed to those who enjoy star ratings or letter grades) enjoy reading and practicing it.

I mean, does anybody really have to read a review to get advance permission to have fun at a "Pirates of the Caribbean" movie? It would just be too pathetic to think so. (Did anybody read reviews before deciding to go on the Disneyland ride? If somebody opined that the audioanimatronics were less than realistic, would that ruin the experience for you? Or did you pretty much intuit that going in?)

So why review [popcorn movies]? Why not let the market do its work, let the audience have its fun and occupy ourselves with the arcana — the art — we critics ostensibly prefer? The obvious answer is that art, or at least the kind of pleasure, wonder and surprise we associate with art, often pops out of commerce, and we want to be around to celebrate when it does and to complain when it doesn’t. But the deeper answer is that our love of movies is sometimes expressed as a mistrust of the people who make and sell them, and even of the people who see them. We take entertainment very seriously, which is to say that we don’t go to the movies for fun. Or for money. We do it for you.

Advertisement
Well, I don't know about that last one. I don't pretend to know who "you" are. But I'm also not interested in pandering. As a critic, and a lifelong moviegoer, I've got my tastes and standards and you've got yours. But I go to the movies for me. If you want to read what I have to say about movies (and I think only a small percentage of moviegoers actually want to read about them, before or afterwards), then that's great. If not, I leave you to the studio marketing and advertising departments, and wish you happy popcorn-munching!