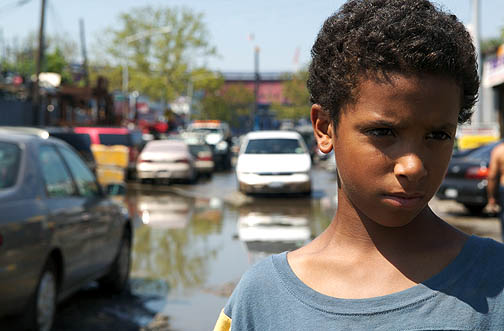 My review of "Chop Shop" is in the Chicago Sun-Times and on RogerEbert.com. Here's an excerpt:

Three shots into Rahmin Bahrani's "Chop Shop," and you're already pulled into its world with an effortless economy and precision that leave you no doubt you're in the best of cinematic hands.

As day laborers stand by the side of a busy road, we don't see the road, but we can hear the traffic. Their heads turn as a truck pulls up off-camera, and they rush over to be chosen for work. The driver, speaking English, selects a few guys and tells a kid he doesn't need him. Just as the truck pulls back out onto the highway, the kid hops into the pickup bed. He needs the work. Wherever this is, it's a Third World economy.

Second shot: The truck rolls past the camera, and we see the kid sitting up in the back. Third shot: The truck pulls over, and we notice the Chrysler Building, then the Empire State Building, in the distance. The driver gets out, lifts the protesting kid out of the back of the Chevy, gives the kid some money out of his own pocket and tells him to buy himself breakfast. Then the title of the movie appears....

Three shots in two minutes and we know so much about this boy's toughness and resilience, the industrial gray-market conditions to which he has adapted and -- despite his confidence and self-reliance -- his inescapable dependence on the adults around him. The 12-year-old Ale (Alejandro Polanco) is an accomplished hustler, whether reselling bags of candy on the subway with a polished sales pitch or stealing hubcaps.