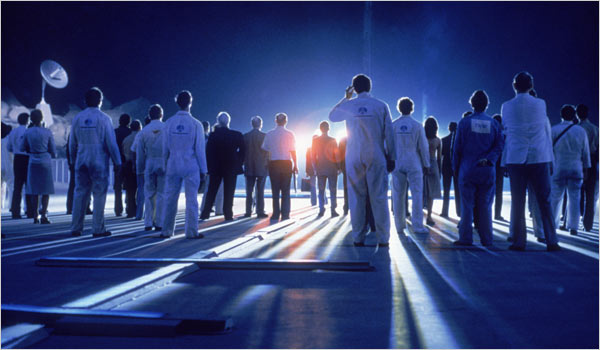 The light is the movie.

In celebration of the 30th anniversary three-disc DVD release of three -- count 'em, three -- versions of Steven Spielberg's masterpiece, "Close Encounters of the Third Kind," I offer yet another quotation from Richard T. Jameson's "Style vs. 'Style'" (Film Comment, March/April, 1980):

"Energy" has become the new cliché of film criticism, which is a damn shame since the cinema is a medium of energy... "Energy" as a cop-out for mindless noise and jitter is reprehensible. But energy, sans quotes, can be lucid, multivalenced, aesthetically informed, and beautiful in ways unique to cinema.

Steven Spielberg misapplies it in "1941," but illuminates the world and his medium with it in "Close Encounters of the Third Kind." "Close Encounters" is, like any other good movie, about mise en scène, the transliteration of energy. "The sun sang to me last night," an old derelict beams. The dissonant but regular chant on a mountain in India is echoed on the toy flute of an Indiana boy, while his mother finds herself painting an odd rock formation into all her pictures and a newly-ex power-company employee (he's chasing a new power) looks for it in rumpled pillows and bowls of mashed potatoes. Form finally compels its own content. Music becomes light, gesture, mathematical formula, the patterns described in space by a celestial craft in motion. The metamorphosis of reality, the rediscovery of possibility, the translation of an idea into visual action: what movies do: why movies exist. The foremost pleader of the UFO cause is played by one François Truffaut, movie director.

This is energy as style, style as energy. It's radiant because it's been defined by a cinematic sensibility: What Spielberg's seeing and the way he sees it are one.

I get chills reading that, because it puts me back in touch with the sense of awe I get from a movie that sings... like the sun.
Advertisement