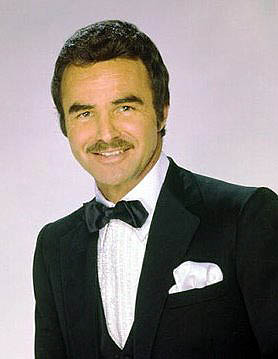 The Burt-a-Thon (formally known as the Burt Reynolds-a-Thon) starts today over at the Welcome to L.A. blog. The awesome Larry Aydlette, whom some of you may know from his blog-lives as That Little Round-Headed Boy and/or The Shamus, has set himself a truly daunting, awesomely ambitious task: For the entire month of February, he will... well, let Larry explain it himself:

Obviously, Burt Reynolds didn't get the e-mail that he was supposed to go quietly away. But that's not the Burt Reynolds way. In his autobiography, "My Life," he begins with a quote from George Bernard Shaw: "I want to be thoroughly used up when I die. For the harder I work, the more I live."

So, I've decided to honor that work ethic and use his birth month for 29 straight days of Burt Reynolds coverage. This isn't a love-a-thon. In rewatching a lot of his movies, I've come to the conclusion that he didn't necessarily deserve to win the Oscar for the films that he and many critics thought he should have won them for. And he was never nominated for what seems to me to be his one indisputable masterpiece (although I doubt many critics will agree with me). But there are quite a few of his films that are very, very good, and deserve reconsideration.

I do think the breadth of his career is certainly worthy of an honorary Oscar. Let's not forget that he ruled America's box office from the late '70s to the early '80s. He is the self-proclaimed "Picasso of car pictures." He was a big, big star. Just because he hasn't chosen to be a less ubiquitous star shouldn't negate the fine and interesting work that fills his resume.

That's right, it's Burt History Month at Welcome to L.A.

And, in an astonishing coincidence, Odienator has emerged from the Fortress of OdieTude and seized control of Big Media Vandalism by declaring The "It's Black History Mumf, Odienator!" Film Festival: