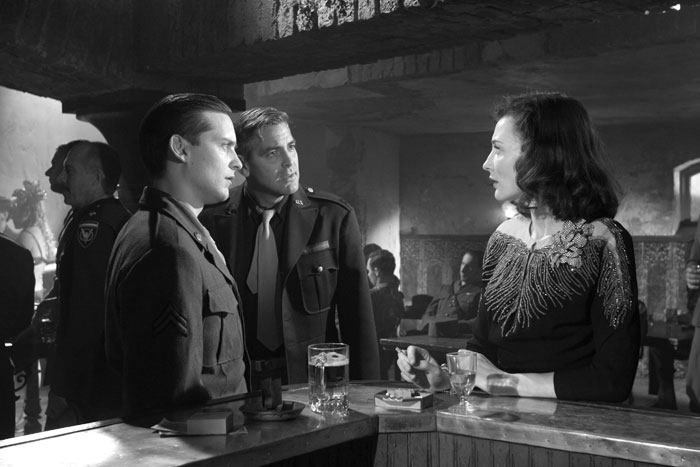 A shot from Steven Soderbergh's "The Good German."

David Bordwell has a capacious post (with 23 illustrative images) beautifully assaying the Hollywood custom of coverage -- basically, the industry practice of "covering" a scene by shooting it from plenty of angles, from master to close-up, so there are lots of options in the editing room. He's following up, and expanding upon, Dave Kehr's New York Times article on Steven Soderbergh's decision to shoot his film "The Good German" as if it were a Michael Curtiz studio production in the late 1940s. (Bordwell discusses lenses and lighting in a previous post.)

In Kehr's illuminating article, actor Tobey Maguire says "what was fascinating to me is how [Soderbergh] was cutting the movie in his head. There’s really no fat on the film. He really didn’t do ‘coverage.’ He only shot the parts of the scene he was going to use, and if he wasn’t going to use it, he didn’t shoot it."

But the description of traditional coverage in the article -- involving shooting with multiple cameras -- isn't the classical Hollywood method, which would be to re-shoot at least parts of the scene again and again from different angles, usually involving extensive re-lighting (and even slightly different blocking) for each new lens and camera position. It's part of what makes actors go stir crazy waiting in their trailers/dressing rooms between set-ups.

Don't miss Bordwell's elaboration on the subject, with quotes from his own interviews with filmmakers and a fascinating analysis of a strange and awkward passage from George Stevens' "Giant." This is another example of why the Bordwell-Thompson blog (launched only months ago) is such a welcome addition to the cinematic blogosphere!