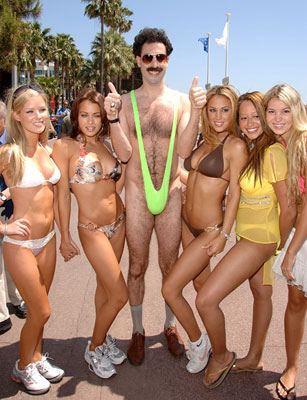 Borat (Sacha Baron Cohen, currently appearing as Jean Girard in "Talladega Nights: The Ballad of Ricky Bobby") has a movie coming out in November with a title as good as "Ricky Bobby." It's called "Borat: Cultural Learnings of America for Make Benefit Glorious Nation of Kazakhstan," and people who have seen it are raving about how subersively smart and revealingly funny it is.

Cohen and his characters (particularly hip-hop dimwit Ali G) are huge in Great Britain, and Naomi Alderman has an analysis of what makes Borat run in the UK Guardian:

Sacha Baron Cohen's latest film is due for release in November, but the storm of protest has started early. Already the film, in which Borat, a fictional Kazakh reporter, spits out food given to him by Jews on the ground it may be poisoned, and refuses to fly "in case the Jews repeat their attacks of 9/11", has been called "disgraceful" and "disgusting".

I first encountered the character of Borat in a clip from his HBO TV show which has circulated widely on the internet. Baron Cohen, as Borat, stands in front of an audience at a redneck bar in Arizona and announces that he will sing "a song from my country". He then sings, "In my country there is problem, and that problem is the Jew. They take everybody money and they never give it back." The chorus is particularly catchy: "Throw the Jew down the well (so my country can be free)." [Clip and lyrics here.]

The reason it is unsettling to hear Borat sing "Throw the Jew down the well" is because of the reaction of those listening. Some sit in mute astonishment and horror. But some join in. Some sing along, smile and stamp their feet. One woman even - unprompted, mind you - puts her fingers to her forehead to make horns when he sings, "You must take [the Jew] by his horns." Borat is unsettling not because his opinions are outlandish but because he reveals how many ordinary people share them....

Borat is shocking because we cannot help but imagine ourselves in the place of his hapless victims and because we understand - though not, perhaps, consciously - that we might have acted precisely as they did. We too might have remained silent when Borat suggested "hanging" homosexuals, or nodded politedly at the suggestion that a Humvee is suitable for "running over Gypsies." Not because we fear for our lives if we disagree but, perhaps, to avoid embarrassment. Borat is funny because he is shocking, and he is shocking because he reveals the truth.

After watching the clip, I'm not so sure that at least some of the people in the crowd weren't in on the joke -- particularly the lady who makes the horns, because she seems aware she's on camera and has evidently decided to play along. Complete "Throw the Jew Down the Well" lyrics after jump...

"Throw the Jew Down the Well" by Borat

In my country there is problem, And that problem is transport. It take very very long, Because Kazakhstan is big.