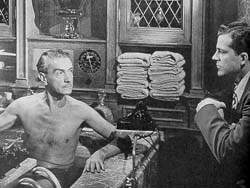 Waldo Lydecker: "I don't use a pen. I write with a goose quill dipped in venom.... Hand me my towel, would you?"

First, let me again express my gratitude to all those who got into the spirit of the Contrarianism Blog-a-Thon (see new category at right) -- with submissions, comments, and other observations on their own sites. My hope was that this would spin off conversations on other blogs as well, and I've participated in some of them myself (and in e-mail, too). I was especially pleased that some of the contributions were from people with new blogs, or who hadn't participated in blog-a-thons before. This was the first time I've hosted one, and I was thrilled and relieved that I hadn't thrown a party to which no one came.

It was just a little over a year ago, in January of 2006, that some movie bloggers over at girish's were discussing the whole idea of writing about film when the subject of Paul Verhoeven's eminently disreputable "Showgirls" came up and this idea evolved: What if they chose a date and everybody who wanted to participate would post something about "Showgirls" on that date and link to the other postings? (You can witness the idea taking shape here.)That, as legend has it, is how the "blog-a-thon" was born. (Andy Horbal at No More Marriages! has been keeping track of recent ones, and offers an overview with his reservations about them, here.)

The Contrarianism Blog-a-Thon grew spontaneously out of a couple posts I did in January (Do the Contrarian (Part I) and (Part II), which I impulsively turned into what I called "Contrarian Week." None of this was planned when I wrote the first post -- not even Part II. (I went back and added [Part I] to the original title after I'd thought of the second part.) And the whole effort was an attempt to distinguish between genuine contrarian arguments, and what I considered to be the equivalent of "shock jock" statements by some mainstream/print critics, just striking a pose to call attention to themselves without anything of substance to say. You used to actually have to subscribe to their publications in order to read what critics were writing; now you access so many print critics online, and with a blog you can link to them and respond immediately to what they've written.

Anyway, with so much contrarian joy and ambivalence still fresh in my mind, and at the risk of gazing so intently into my own navel (and/or the collective belly button of the blogosphere) that I fall in and am sucked through a black hole from which only lint has been previously known to emerge, I'd like to share with you some of my feelings about the experience....

Probably the scariest thing was hosting what one of my correspondents called (with considerable skepticism) a kind of "open mic." The subject was contrarianism (not, I hasten to point out, about labeling individuals as "contrarians," but about the idea of championing an unpopular point of view -- and whether it was positive or negative was irrelevant). That meant I knew I'd get submissions that I was bound to strongly disagree with. And I did. But, although this blog has always been an attempt to call for critical standards (mostly mine!), I didn't feel that, in this case, I should play the role of the gatekeeper. I've written for traditional (and non-traditional) "gatekeeper" media all my life (well, for the last 35 years or so -- since Junior High School!), where I had to make decisions about what was suitable for publication or not, and I didn't want to play that role this time. And that scared the bejeezus out of me.

There was also the fear (as I alluded to above) that people would either find the subject too vague and uninteresting (though I hoped there would be enough of a range of contributions that anybody interested in movies would find something to engage them), or that (as a few e-mailed me -- facetiously, I hope), the ultimate "contrarian" stance would be to not participate! (Matt Soller Zeitz, proprietor of one of my favorite movie blogs, The House Next Door,

The limitations of the format were also a bane. I felt there had to be some kind of deadline (although I eventually stretched it over four days), some way to give focus to the thing, but a single weekend couldn't accommodate some people who (strange though it may seem) had other things going on in their lives. (In contrast, Harry Tuttle's Contemplative Cinema Blogathon expanded across the entire month of January.)

And because I was so sincerely grateful for all the contributions, I didn't feel that it was my place to argue with them. I was hoping readers would do that. My function would be to give people a forum to express whatever they wanted to say, and to get feedback from whoever read them. I wanted the posts to stimulate discussion, but didn't have the technology I'd like to have had to make that easier. I wound up with a big list of links to contributions, but didn't have a handy way to let people comment on them individually at Scanners (although they could post their comments on the individual blogs that allowed them). I don't know if my Moveable Type blog software (hosted at the Chicago Sun-Times) has a plug-in that would allow threaded discussions, but I'd sure like to have something like that. If anybody knows how it can be done, please tell me!

I've always liked David Edelstein's Slate Movie Club as a model for what could be done with online film criticism. The oldest one I could find was from 1998, just between Edelstein and Jonathan Rosenbaum. And after some of my specific criticisms of Rosenbaum's reviews of late, I thought Edelstein's introduction captured just the spirit I was looking for with the Contrarianism Blog-a-Thon:

"I am honored, Jonathan, to have you as my correspondent. Although I sometimes find your opinions wacko and your style unduly belligerent, you're one of a handful of critics in this country of real stature, and one of the few perennial antagonists for whom I can muster a lick of respect. Not to mention that you're partly responsible for one of the cinematic highlights of 1998, the restoration of Orson Welles' 'Touch of Evil': a different and significantly greater film than the studio-mandated recut released over Welles' weary objections."

Advertisement
I feel the same way (re: the first part of the second sentence) -- not just about Rosenbaum (one of our best critics), but about most critics at some time or another. (Including myself.) Oh, and by the way, one of the Contrarian Blog-a-Thon contributions rips apart that 1998 version of "Touch of Evil" as a travesty of Welles' work! I don't know what to think. Now I'm going to have to go back and watch the 1998 version, then compare with my laserdisc of the second studio version (with a copy of Welles' memo in hand) to get a better idea of the changes.

So, I would very much like to hear what readers and contributors have to say. What do you think are the strengths and weaknesses of the "blog-a-thon" format I used last weekend (or the blog format in general)? How could it be improved -- technologically or otherwise? What did you appreciate or not appreciate about the Contrarianism 'thon itself? How much of it did you read? Should I have taken issue with some of the postings in order to help stimulate discussion? Or is it better that I just shut up? And you could comment on the individual submissions too, you know...

P.S. Ah, here's the comment from Girish that I'd been thinking about earlier today. It's at Cinephiliac, from about a year ago, under Code Well Known, or How to Build a Better Blog-a-Thon:

I don't like the idea of having a centralized system either.

Blog-a-thon ideas should be spontaneous, growing organically (or dying organically, which will also happen), and can and should come from anywhere and anyone.

Some ideas will catch fire and attract many bloggers, others won't, and that's fine too.

And I love Aaron's passage that you excerpted. Those are the kinds of films I would love to write about (but not exclusively, not anything exclusively--any and every movie, however "high" or "low", should be game).

Spontaneity. Freedom. And Mutual Respect For Each Other's Choices.

This is my vision of a perfect blog-a-thon world!