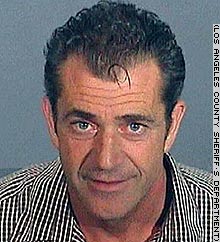 Believe it or not, there are still a few good Mel Gibson jokes left to tell. This one's from Andy Borowitz. EXCERPT:

"Listen, I'm all for blaming things on the Jews, but this guy went too far," said Mr. bin Laden.

The al-Qaeda leader said that the next time Mr. Gibson feels the urge to spew hateful rhetoric, "count to ten first."

"There's a time and a place for everything," Mr. bin Laden said. "And the time to launch into an anti-Semitic tirade is when you're speaking on al-Jazeera from the comfort and safety of your cave -- not when you're stopped by the cops."

Advertisement
Yes, by all means, count to ten first. That way you won't say anything you mean that you might have to apologize for later.

"I'm not an anti-Semite. I just talk like one when I'm drunk!"

UPDATE (8/2/06): Maureen Dowd offers a brief overview of The Bigotry of the Mel (sober, and in his movies) in today's New York Times. Mostly he's on record (in interviews and on film) as anti-gay and anti-Jew, with perhaps an especially low tolerance for gays of the Hebrew persuasion and Jews of the homosexual persuasion. Dowd turns over the last half of her column to Leon Wieseltier, a major Jew and by implication one of the Hebrew-American leaders Mel has asked to help him through anti-Semitic rehab. Wieseltier, literary editor of The New Republic, who says Mel has been "a very bad goy.":

“It is really rich to behold Gibson asking Jews to behave like Christians. Has he forgotten how bellicose and wrathful and unforgiving we are? Why would a people who start all the wars make a peace? Perhaps he’s feeling a little like Jesus, hoping that the Jews don’t do their worst and preparing himself for more evidence of their disappointing behavior. [...]

“Moreover, it is the elders’ considered view that whereas alcoholism may require a process of recovery, anti-Semitism is a more intractable and less chic failing. This was not a moment of insanity, even if Gibson is insane. His hatred of Jews was plain in his movie and in his twisted defense of it, which was made when he was sober under the influence of his primitive world view. Perhaps he thinks that all he needs to do is spend a few months in AA — Anti-Semites Anonymous — and find some celebrity sponsor and run for absolution to Larry Zeiger, I mean Larry King, where he can say with perfect sincerity that the Holocaust was a terrible thing and gut yontif.

“We understand that Gibson cannot do it alone. But why do we have to do it with him? We would find it hard to be in a room with him unless, of course, he wants to count some money with us. Why doesn’t he turn to the vast number of his Christian brothers and sisters who show no trace of anything resembling his disgusting prejudice?

“Mad Max is making Max mad, and Murray, and Irving, and Mort, and Marty, and Abe. But we’re not completely heartless. If he wants to do Shylock at dinner theater, fine. If he agrees to fill his swimming pool with Kabbalah water, fine."

Truth is, I didn't interpret "The Passion of the Christ" as anti-Semitic, although I see how others could. But as a director, Gibson has taken stories based on Jesus and William Wallace, and stripped them down into nothing more than bloody tales of martyrdom and revenge. (Even his performance in Franco Zeffirelli's film of "Hamlet" was less a man tortured by doubt than an avenging angel.) The primary emotion all these films express -- and, especially, evoke -- is outrage, hatred. And that speaks just as loudly as anything he himself has said off-screen.
Advertisement

Another update, from IMDb's Studio Briefing, about this whole fiasco:

It was another day of crisis management for Mel Gibson Tuesday as the film industry debated whether he would ever be able to overcome the apparent damage to his career resulting from his anti-Semitic remarks following his DUI arrest over the weekend. Although Gibson issued a more detailed apology for his statements, several PR advisers said that it came too late. Washington, DC-based PR exec Richard Levick told MSNBC, "In the first 24 hours, people start forming opinions. ... He has constantly been behind the story." Abraham Foxman, director of the Anti-Defamation League, told the Associated Press that he felt "a little bit uncomfortable" about Gibson's apology, since it appeared to be the careful work of publicist Alan Nierob. "To what extent is it a true reflection of Mel Gibson's true feeling?" he asked. He also noted that Nierob had told him two years ago that Gibson wanted to meet him to discuss his "The Passion of the Christ" with him. He said that the meeting was never arranged. Rabbi Marvin Hier, founder of the Simon Wiesenthal Center, noted, "Anti-Semitism is not born in one day and cannot be cured in one day, and certainly not through the issuing of a press release." On the other hand, Mandalay Entertainment Chairman Peter Guber said that any attempt to blackball Gibson would "fly in the face of what free speech is. ... Anybody trying to prevent anybody from being gainfully employed is distasteful to me." Similarly producer Lynda Obst told the newspaper, "This could be an opportunity where we say to anti-Semites that Jews don't boycott."

I hate it when people speculate about how someone's actions are going to affect their career -- whether it's Woody Allen and Soon Yi or Rush Limbaugh and Oxycontin. The truth is, nobody knows, and it's way too early to be making guesses. But I also have to wonder: Who said anything about the industry blackballing Mel Gibson? (Hello? "Passion of the Christ": $370 millon theatrical gross in the US alone.) There will always be companies who do business with him, no matter what he says, as long as he makes them money. And if there's any beauty to this whole ugly incident, it's that Gibson was indeed exercising his free speech rights (as I mentioned prominently in my original post). And now, so are others who are defending or condemning him for what he acknowledges he said.

Last week, in my hometown Seattle, a man who was estranged from his Muslim family, who had left the Islamic faith and been baptised as a Christian, walked into the downtown of the Jewish Federation of Greater Seattle and shot five women, including one who is pregnant. One person died, another is on life-support. The killer said he was upset about the fighting in the Middle East. So, with these events hitting so close to home, maybe I'm a little less tolerant of Gibson's brand of intolerance just now. As I said before, quoting "Under the Volcano": "There are some things you just can't apologize for."

This is the apology we had sought and requested. We are glad that Mel Gibson has finally owned up to the fact that he made anti-Semitic remarks, and his apology sounds sincere. We welcome his efforts to repair the damage he has caused, to reach out to the Jewish community, and to seek help.

Once he completes his rehabilitation for alcohol abuse, we will be ready and willing to help him with his second rehabilitation to combat this disease of prejudice.

This is fine and proper. But not everybody accepts it, nor should they be expected to.