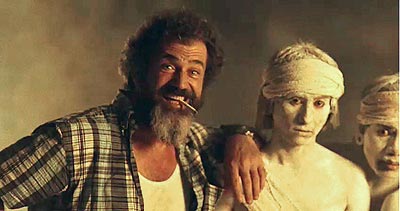 Mel Gibson with a player in his upcoming film "Apocalypto," who is undoubtedly not of the Hebrew persuasion.

Drunk people say the darndest things. Like Mel Gibson, who was arrested on DUI charges Friday (blood alcohol level: 0.12; legal limit: 0.08). He seized the occasion, around three in the morning, to offer the arresting officers his assessment of the role of Jewry in world affairs. And, really, who wouldn't, under the circumstances? Field sobriety tests present splendid opportunities to expound on a range of subjects, especially if you can't focus on any one of them for too terribly long. You've kind of got a captive audience (or vice-versa), and if the cops will listen and record what you say, what a handy way to organize your religious and political opinions before they put you in a detox cell! According to the incident report obtained by AOL's TMZ.com and summarized in the New York Daily News:

The "Passion of the Christ" director repeatedly said, "My life is f----d," according to the report by Los Angeles County Deputy James Mee... [...]

"F-----g Jews. The Jews are responsible for all the wars in the world," Mee's report quotes him as saying.

"Are you a Jew?" Gibson asked the deputy, according to the report.

The actor also berated the deputy, threatening, "You motherf----r. I'm going to f--- you," according to Mee's report.

The actor also told the cop he "owns Malibu" and would spend all his money "to get even with me," Mee said in his report.

TMZ quoted a law enforcement source as saying Gibson noticed a female sergeant on the scene and yelled at her, "What do you think you're looking at, sugar t--s?"

Deputy Mee then wrote an eight-page report detailing of the incident, but higher-ups in the sheriff's department felt it was too "inflammatory" to release and would merely serve to incite "Jewish hatred," TMZ said.

(Note: Officer Mee's last name is not a traditional Hebraic one.) TMZ.com, which broke the story and the allegations of a police cover-up of Gibson's Jew-hating tantrum, reports that Malibu police had stopped Gibson two other times for DUIs -- three years ago and last year -- but let him slide. Not Friday, though.

Everybody and her pedicurist has been weighing in on this, but the first thing I thought of was how alcohol loosens the inhibitions that usually prevent people from saying what they really feel. Drunken free-speech probably more accurately reflects someone's true attitudes than sober, publicist-crafted press statements. Gibson has apologized, saying he has a problem with alcohol. But it sounds to me like he has a bit more of a problem with Jews. And as Albert Finney said in John Huston's film of "Under the Volcano": "There are some things you can't apologize for." A commenter over at Anne Thompson's Hollywood Reporter Risky Biz Blog sums up my own feelings about Mel's Latest Disgrace:

Wow, that booze is pretty potent stuff. Like Mel Gibson, I can say that some of my best friends are Jews. It's quite disturbing to think that I might denounce them with obscenities and blood-libel accusations if I drank too much alcohol.

MEL UPDATE (8/1/06): Mel Gibson issued another apology (this time to Jews -- oops, he forgot the first time), asking for forgiveness, and announcing that he will check into rehab. We assume he means the Shylock Center for Jew Abuse, but maybe not. Classic stuff from the horse's... mouth: "There is no excuse, nor should there be any tolerance, for anyone who thinks or expresses any kind of anti-Semitic remark.... [Note: It's the remark that is inexusable, whether silently thought or said aloud, not the anti-Semitism itself.] But please know from my heart that I am not an anti-Semite. I am not a bigot. Hatred of any kind goes against my faith." And yet... hatred of any kind is almost always said to go against any faith -- and yet, it's that same faith that people use to justify their hatred. Maybe Mel needs to detox on whatever virulent strain of renegade Catholicism he's infected with...