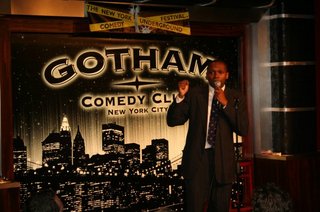 U.S. Senate apologizes for slavery and segregation: http://bit.ly/G46Cu. Bob Byrd breaks down on Senate floor. "Too soon. Too soon."

I think that's a funny joke. Normally, I find set-up/punch-line jokes the lowest form of humor (far below puns and slapstick in their paucity of imagination), and I regard them warily, not unlike the way Thoreau viewed "all enterprises that require new clothes." But I cracked up when I saw this tweet from Robert A. George. To find it funny, I guess you'd have to know that Senator Robert Byrd (D-WV) is very, very old, and that he was a member of the Ku Klux Klan in his youth. But in the ad hominem '00s, many people would first look at the identity of the joke teller before deciding if it was humorous.

Robert A. George, eh? Wait a minute -- he's a conservative and a libertarian! He's black! He's a naturalized American citizen, born in Trinidad (and Tobago)! He's a Catholic! He's a blogger, a Twitterer, a Facebooker, a New York Post columnist, a stand-up comedian, a comic-book geek! Soooooo, of course he's going to make that joke about Bob Byrd, right?!?!

Actually I don't see how any of those things affect whether this joke works, do you? Some might think the dig is a bit unfair because Byrd was in his early twenties when he was Kleagle and Exalted Cyclops, and has long since disowned the Klan. But that's an observation about the subject of the joke, not an assumption about the presumed motives of the teller. (On the other hand, when George W. Bush jokes about looking under the couch to find WMDs, the messenger definitely changes the meaning of the gag.)

This is, of course, reflective of the argument-as-opinion attitude that has undermined virtually all popular discourse and the credibility of the American news media. "Liberals" say things, "conservatives" say other things, and none are held accountable for their reasoning because it is assumed that conclusions precede deliberation and opinions trump evidence. "Facts" are mutable, and irrelevant -- because what's important is to report "both sides" expressed conflicting opinions, even if one or more of them is pure delusion. Moral relativism? Yes, and even worse: Factual relativism.

Last week I criticized a Bill Maher routine and LA Times op-ed for faulty comedy. Maher cited President Obama's ubiquitous presence on television as evidence that the administration is not serious about pursuing its stated political goals. Less TV, more action, Maher said. He began his op-ed with: "President Obama should just join the cast of 'I'm a Celebrity, Get Me Out of Here!' It's not that farfetched; he's been on everything else." Six paragraphs of quips about Obama's TV photo-ops culminated in this:

I mean, selling the personal part to stay popular, I'm all for it, but you got us already. We like you, we really like you! You're skinny and in a hurry and in love with a nice lady. But so's Lindsay Lohan. And like Lohan, we see your name in the paper a lot, but we're kind of wondering when you're actually going to do something.

In the monologue, that last sentence was not delivered as a laugh line. While I thought some of Maher's wisecracks were mildly clever ("You don't have to be on television every minute of every day -- you're the president, not a rerun of 'Law & Order'"), I pointed out that his premise was flimsy and not very smart because there's no connection (beyond a superficially jokey one) between Obama's TV appearances and the seriousness of his commitment to his policies. Some people questioned if that was really what Maher was saying. After all, he's just a comedian and these were just jokes. Point taken. But I insist there is nothing more serious (or powerful) than the crafting of comedy. Laziness in that arena doesn't cut it. Don't worry, I'm not about to suggest that Maher should spend less time on television and more time learning how to write and deliver material, because I don't think the former has any effect on the latter. For the most part I enjoyed the discussion for the reasons I always enjoy reading and responding to comments -- because I like the give and take, the opportunity to clarify what I meant, to consider other perspectives, and even to adjust my own opinions.

As usual, the most discouraging comments came from people who didn't even bother to address what I'd written. Here's an excerpt of one from Bill Wilson that I didn't even approve because it's so far off-base I wanted to respond to it here instead:

I think this article was nothing more than a transparent repirsal towards a liberal who stepped out of line and (mildly) criticized the Democratic Party's figurehead. Though Maher aggressively pushes liberal causes every week, he express discontent once and is branded a heretic by the likes of Jim Emerson, who never saw a conservative he didn't despise.

So, what I wrote -- even though it had nothing to do with Maher's or Obama's political agendas -- is immaterial. All that matters to Bill W. is that Maher "criticized" Obama, and that I supposedly "criticized" him right back!

On what grounds? Because I hate conservatives and I love Obama!

Actual criticism, though, requires specifics. No opinion is valid, whether it eventually proves "correct" or "incorrect," if it isn't accompanied by evidence and coherent argument. Do I agree with Maher that health care is an important priority? Yes, but that isn't what I wrote about. Do I think Obama is on TV too much? I don't know; I don't watch shows that devote segments to the new puppy or the romantic trips to Broadway and Paris. Do I think the administration has yet to "do something"? Well, that's an impossibly broad statement, but even Obama's severest critics aren't saying he hasn't done enough. They're angry about all the things he's done (and undone). Do I think Obama is like Lindsay Lohan in other ways, because they're both skinny and in a hurry and in love with a nice lady? I don't enough about Lohan to answer that....

So, in case you've forgotten or never noticed it, please take a moment to appreciate that quotation from Daniel Dennett (an evolutionist!) at the top of the right-hand column: "There's nothing I like less than bad arguments for a view that I hold dear." That's the founding principle of this blog, and the reason I keep writing it. I'd rather talk about why I agree or disagree with someone's reasons than whether I agree or disagree with someone's conclusions. I've always said I read critics for their writing, their powers of observation and their ability to think, not for their verdicts. (And, by the way, I would like to ban the words "agree" and "disagree" from all writing, especially in opinion pieces.)

Campaspe at Self-Styled Siren wrote a lovely personal essay recently about her relationship with Molly Haskell's book, From Reverence to Rape. Something she said resonated with me:

I had discovered this book in the town library, and I probably took it off the shelf because the title struck me as promisingly salacious. I was only 18. But what I got between those baby-pink covers (the wit of that choice only struck me later) was a brain-rearranging look at the movies I had spent my childhood and adolescence watching while other kids were developing, well, a social life. Here was a fiercely intellectual critic who not only liked all the movies that I liked, but liked them for the same reasons. As much as I had been devouring Kael in the New Yorker, I couldn't say the same for her.

Bingo! As I've mentioned here many times, Kael is a writer who was (in-)famous for seeing so much in a movie and then completely misunderstanding how it all fit together. She'd describe in detail something a movie was doing, and then proclaim that it was great or awful as if she hadn't read what she'd just written. Sometimes even when you agreed with her you didn't agree with her. That's not just a crucial distinction, it's the only one that matters.

So, I'm told by some commenters that I like or dislike what Maher said about Obama because I agree or disagree with certain unspecified political positions held by one or the other. Wrong. I don't like the way Maher thinks, or his delivery, and that's what I wrote about. I don't care if he "agrees" with me on certain issues or not. Even Glenn Beck apparently dislikes Nazis. But that's because he thinks they're too left-wing:

P.S. If Maher wanted to go for smarter, more perceptive humor he might examine these comments from Mother Jones blogger Kevin Drum for material about Obama's low-key M.O. -- the same thing that drove many to distraction during the campaign. Perhaps Maher's perceptions about Obama have more to do with this than his TV appearances do:

He doesn't feel like he has to react immediately to every provocation. When he does, his responses are usually measured and sober. He looks for middle ground. He's willing to wait for the right time to push the boundaries a little further in the direction of his choosing.

This is sometimes intensely frustrating. The gay community, for example, is up in arms over his lack of action on issues like DOMA and DADT. But there shouldn't be any surprise about that. It was obvious throughout the entire campaign season that this is how he works. He'll let the military stew over DADT for a while until they basically ask him to change it, rather than the other way around. It might take longer, but he figures -- probably correctly -- that the end result will be better for everyone. Ditto for DOMA, which doesn't yet have the votes in Congress for repeal.

And ditto for lots of other stuff. He's shown a disturbing willingness to compromise on financial regulation and healthcare. He hasn't engaged much with the Waxman-Markey climate bill as it slowly gets watered down into nothing. He's a cautious guy who doesn't take a lot of chances unless he feels some real pressure to do so. Paradoxically, this is exactly what I expected from him but I find myself disappointed anyway. A little bit more fire in the belly would be welcome.

But he is who he is, and the same instincts that disappoint us on some issues serve him well on others. So far, anyway. The next few months -- possibly the next few days in Iran -- will tell us just how much real hope and change Obama's temperament produces when the rubber finally hits the road.