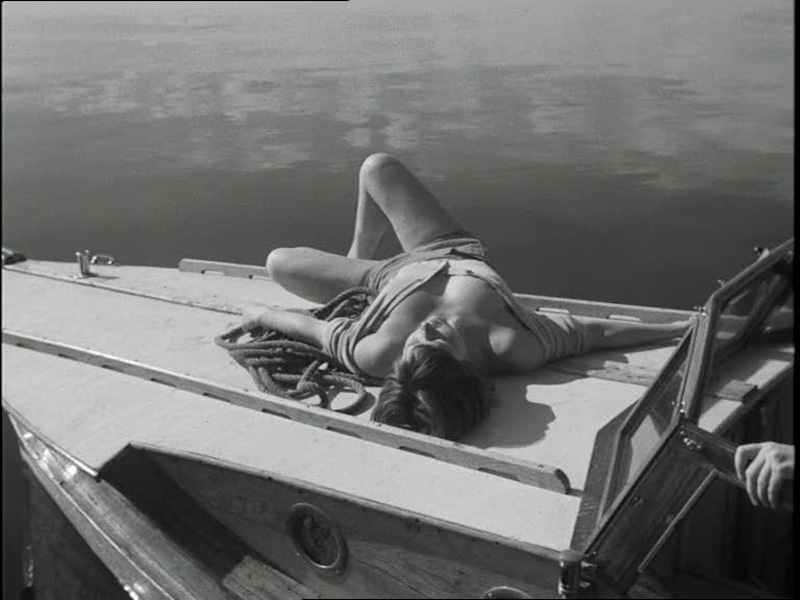 Harriet Andersson in Ingmar Bergman's "Summer with Monika" (1953). US tagline: "A Picture for Wide Screens and Broad Minds."

Jonathan Rosenbaum puts another nail in Ingmar Bergman's coffin in today's New York Times ("Scenes From an Overrated Career"). As important as Bergman was to the rise of European "art film," especially in the 1950s and '60s, Rosenbaum says, Bergman -- who was more a theatrical director than a cinematic one -- wasn't really adding anything new to the art of film, and his work hasn't held up over time:

Sometimes, though, the best indication of an artist’s continuing vitality is simply what of his work remains visible and is still talked about. The hard fact is, Mr. Bergman isn’t being taught in film courses or debated by film buffs with the same intensity as Alfred Hitchcock, Orson Welles and Jean-Luc Godard. His works are seen less often in retrospectives and on DVD than those of Carl Dreyer and Robert Bresson — two master filmmakers widely scorned as boring and pretentious during Mr. Bergman’s heyday.

The same qualities that made Mr. Bergman’s films go down more easily than theirs — his fluid storytelling and deftness in handling actresses, comparable to the skills of a Hollywood professional like George Cukor — also make them feel less important today, because they have fewer secrets to impart. What we see is what we get, and what we hear, however well written or dramatic, are things we’re likely to have heard elsewhere.

So where did the outsized reputation of Mr. Bergman come from? At least part of his initial appeal in the ’50s seems tied to the sexiness of his actresses and the more relaxed attitudes about nudity in Sweden; discovering the handsome look of a Bergman film also clearly meant encountering the beauty of Maj-Britt Nilsson and Harriet Andersson. And for younger cinephiles like myself, watching Mr. Bergman’s films at the same time I was first encountering directors like Mr. Godard and Alain Resnais, it was tempting to regard him as a kindred spirit, the vanguard of a Swedish New Wave.

It was a seductive error, but an error nevertheless. The stylistic departures I saw in Mr. Bergman’s ’50s and ’60s features — the silent-movie pastiche in “Sawdust and Tinsel,” the punitive use of magic against a doctor-villain in “The Magician,” the aggressive avant-garde prologue of “Persona” — were actually more functions of his skill and experience as a theater director than a desire or capacity to change the language of cinema in order to say something new. [...]

It’s strange to realize that his bitter and pinched emotions, once they were combined with excellent cinematography and superb acting, could become chic — and revered as emblems of higher purposes in cinema. But these emotions remain ugly ones, no matter how stylishly they might be served up.

Michael Atkinson, who I quoted earlier in the week, makes some similar criticisms, yet comes to a different conclusion: "[N]owhere... is there a lazy, unambitious or unoriginal directorial moment."

I think there's some truth in both Rosenbaum's and Atkinson's assessments, but Rosenbaum seems more interested in asserting his own personal pantheon than in evaluating Bergman's oeuvre. Yes, the reputation of Bergman's work, and its former sense of vital importance, has undeniably receded. After all, it had practically nowhere else to go, given Bergman's overwhelming stature in the '60s and '70s. (On a personal note, I haven't felt compelled to watch or re-watched any of his films in years -- except "Persona" -- although I still treasure "Fanny and Alexander," and have fond memories of his early, funny pictures like "Smiles of a Summer Night" and "The Devil's Eye.") That's why, honestly, I haven't been able to write about Bergman myself this last week: He feels like an indistinct memory to me, safely enshrined as "classic" but almost taken for granted. Nevertheless, I've put some of his films at the top of my Netflix queue ("Shame," "Hour of the Wolf") in hopes of getting reacquainted.