The story of Ben Affleck's "Argo" concerns the real-life rescue of six fugitive American embassy employees from Ayatollah "Salman Rushdie Fatwa" Khomeini's Iran in 1980. The Canadian ambassador, Ken Taylor, hid them in his home until they were smuggled out of the country 79 days after the takeover of the embassy by Iranian militants. But the movie is more substantially interested in the nature of movies themselves, and how stories get turned into them. Since its premiere at the Toronto International Film Festival last month, "Argo" has been praised as "a crackerjack thriller" (the kind of argot movie reviewers use) and criticized for downplaying the Canadians' considerable efforts and not being, you know, "historically accurate. I'm sore-y, we know it's 'Based On A True Story' and all, but that's not really what this movie is aboot.

"Argo" is the real name of the movie that was used as a front to get the six out of Tehran. That is, in addition to being the title of this Ben Affleck movie about the rescue, it's the actual name of the fake movie-within-the-movie, a science-fiction picture announced in the trades as one of billions and billions of low-budget "Star Wars" rip-offs that went into production in the late '70s and early '80s, that was originally based on Roger Zelazny's 1968 Hugo Award-winning novel, "Lord of Light." The story of this phony production is nested inside the larger tale of how the six American escapees were given false identities as Canadian filmmakers in order to get them out of the country (it later became known as "The Canadian Caper") and their story is, of course, nested inside the even-larger story of their fellow employees, the 52 hostages who were held captive for 444 days, a standoff that helped torpedo the "malaise"-stricken Jimmy Carter presidency, especially after a failed rescue attempt in April, 1980, seven months before the election. And then, surrounding that historical narrative, is Ben Affleck's movie, which is based on declassified records (and a 2007 Wired story) from the formerly top-secret mission and includes a concluding voiceover by former president Carter.

The point is, you have actors in a Hollywood movie ("Argo," 2012) playing American embassy employees impersonating Canadian filmmakers making an international science-fiction co-production ("Argo," 1980) based at Burbank Studios (the once and future Warner Bros. lot) ostensibly to be shot on location in Tehran (for which Affleck's movie substitutes locations in Istanbul, Los Angeles and Ontario, CA). Oscar-winning screenwriter, actor and director Ben Affleck ("Gone Baby Gone," "The Town") plays real-life CIA agent Tony Mendez impersonating a movie producer, so low-key behind a full beard that hardly any emotion registers on his face. 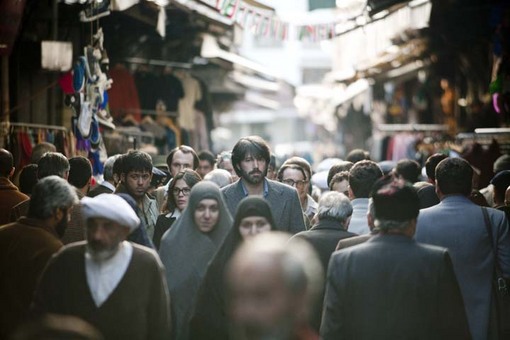 There's a scene in which the filmmakers visit the crowded, labyrinthine public market and their safety is endangered when a shopkeeper objects to having his photograph taken by the "Argo" production "set designer." I was worried about something else in this scene, though. The embassy personnel are impersonating members of a film crew -- director, cinematographer, a couple of producers of various kinds, location manager, screenwriter -- and the "director" (Tate Donovan -- in an ascot!) lags behind in the group. This would not happen. Any real director would obviously be out in front, so this had me fearing our protagonists might be unceremoniously unmasked. (Even though, yes, we all know they got out safely; suspense can work even when you know what happens.) Taylor, the Canadian ambassador, also taught the group to "speak Canadian" -- something that really happened but isn't in the movie, and I miss it. Although mention is made of the native articulation of "Toronto" (without saying the second "t"), I kept waiting for somebody to mispronounce "zed" or say "a-genst" instead of "a-GAYNst," in which case the jig would have been up. 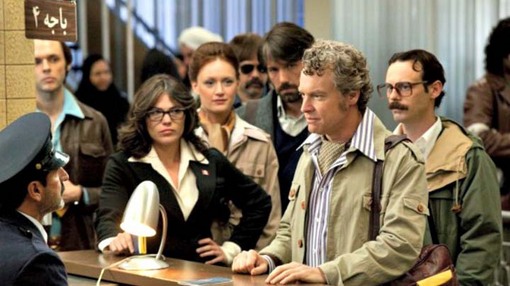 The real reason I bring all this up is what happens in the last 20 minutes or so of the movie (well, before the umpteen Happy Endings that have been tacked on, from the hostages' homecoming to Jimmy Carter's VO to Mendez's romantic reunion with his estranged wife) is so preposterously suspenseful that it seems to be making fun of itself. And by that I mean that, by embracing and overdoing just about every thriller trope you can think of, it shows just how visceral (Pavlovian?) and effective (manipulative?) the Hollywood movie is. In other words, it's patently outrageous and it works -- which is what the movie itself is about. I seem to remember somebody saying that if you put this scenario into a movie nobody would believe it. Or, if they didn't, they should have.

So many climaxes are built into the final escape that, on the level of meta-awareness, you just have to laugh, even as your pulse is pounding. I'm not sure I can even remember them all. Let's see: The mission is cancelled at the last minute, but after a night of whiskey and solitary hotel soul-searching, Mendez decides at the even-more-last-minute to go ahead with it anyway -- meaning someone in Washington has to re-approve the airline tickets, which have been cancelled. Only the President Himself can give the order, so Mendez's colleague (Bryan Cranston) has to get ahold of Hamilton Jordon (pronounced "Jer-dn, you may remember; here played by Kyle Chandler) and in order to do that he has to track down the school his kids attend and impersonate the principal by saying there's an emergency. On the way to the airport, their van is nearly caught between two crowds of angry demonstrators. Then, when the group reaches the ticket counter, the reservations aren't there! The first security checkpoint isn't too much trouble, but when they get to the second one they are stopped because, although they have the proper exit forms, there is (of course) no record of the six entering the country under their false identities. 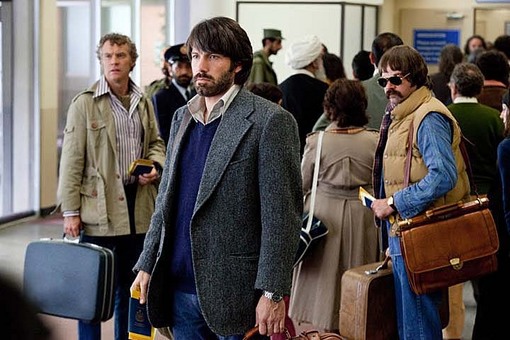 Meanwhile, a bunch of Iranian child-laborers are systematically going through the documents shredded by the embassy staff just before the mob stormed their offices, attempting to piece together the identities of the missing hostages. (This really happened, though not as it's shown in the movie.) And some official types have been snooping around the ambassador's place, talking to the housekeeper -- who knows something and may or may not spill the beans. Then, the group is detained at the third and final checkpoint (where, we're told, the Revolutionary Guards speak English and have been educated in North America). The guy who had resisted the mission all along steps forward and wows the guards with his storyboards for the movie. They show the full-page Variety ad and news story they placed to make "Argo" seem real (almost as real as a lot of movies that never get made or released). Then he goes in the back to call the production office in Burbank and... the phone rings and rings! Oscar-winning makeup man John Chambers (John Goodman) and his co-conspirator, director Lester Siegel (a fictionalized composite character played by Alan Arkin), have been informed that operation was cancelled, so they went out to dinner. And now, even as the crucial call is coming in from the Tehran airport, they can't get back to the office because some other show is shooting a fight scene and they have to wait for "Cut!" 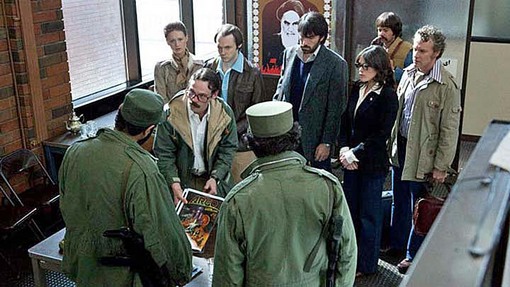 Then, once the group is cleared to board the plane, one of the shredded faces is pasted together and identified, the Canadian ambassador's home is raided, and... the air traffic control tower notifies the pilot that he is second in line for take-off. That's right: SECOND!!! The Revolutionary Guards storm the gate and, packing some serious weaponry, jump into jeeps which take off after the jetliner, giving hot pursuit until they run out of runway...

(end of spoilers, more or less)

How much of this actually happened? Hardly any of it. (It's a movie, dammit!) And that, I contend, winds up being the significant subject of the film, intentionally or not: how movies enter, transform and create history, regardless of "what actually happened." If the cinema can kill Hitler and Goebbels and prematurely end WWII before the a-bomb is dropped (see "Inglourious Basterds), then surely it can take a few dramatic (or cinematic) liberties with a story of how a movie saved the lives of six people from the clutches of a tyrannical theocratic regime. It's the artist-entertainer's prerogative to turn history into storytelling -- and sometimes the movie version supplants the headlines and the satellite broadcasts in the popular imagination and, for better or worse, the movie essentially becomes the history. Like Robert Altman's "The Player," another well-known movie about movie storytelling, "Argo" ends up being about the snake swallowing its tail. (Which isn't even a tail when you think about it, really; it's just snake.)

I don't think "Argo" is quite done with history yet, either. When Roger Ebert saw it for the first time in Toronto, he began his festival report by saying: "The winner of the Academy Award for Best Picture will be Ben Affleck's tense new thriller 'Argo.'" I'm terrible at making predictions, but I sure hope Arkin gets a nomination. It's not just that he has lots of cranky, cynical wisecracks about showbiz; it's that he makes them funnier than they have any right to be. But if Affleck and his movie do take home the gold, as they say, it would make for a heartwarming narrative about a young man with lots of promise who became a hot movie star and part of a tabloid celebrity couple ("Bennifer"), who then became kind of an industry joke, and then worked his way back to the top as a respected director.

Wouldn't that make for a nice Hollywood ending?