Are YOU Kevin Smith's friend? 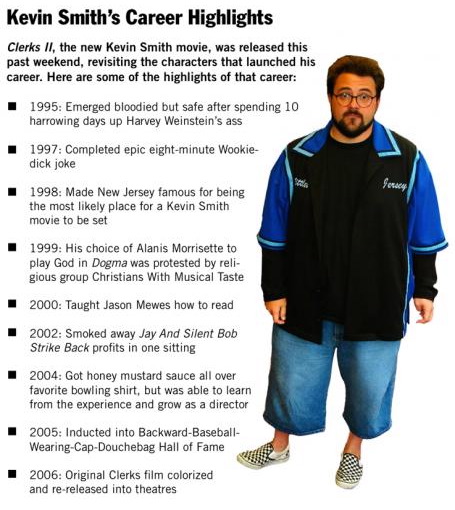 Kevin Smith - From The Onion

New York Magazine reports on "How Kevin Smith Reinvented Movie Marketing." By manufacturing a dust-up with a TV movie critic just before the opening of his film and getting lots of free publicity? Sure. But also, by listing 10,000 of his MySpace "friends" in his credits:

Smith’s newest addiction is MySpace: “I think it has a lot to do with growing up fat, ’cause you’re always trying to find acceptance and credibility. I’ve been on since March and I’m closing in on 50,000 friends. So I feel like, Wow, that’s kind of cool." The Weinstein Co. hatched a plan to promote 'Clerks II' by putting the names of the film’s first 10,000 MySpace friends in the credits. They thought the contest would go for weeks. They had the names in two hours.

2004: Got honey-mustard sauce all over favorite bowling shirt, but was able to learn from the experience and grow as a director.

This may be the definitive test to see whether Smith has a sense of humor. About himself.
Advertisement