Are You An Extra In Your Own Life? 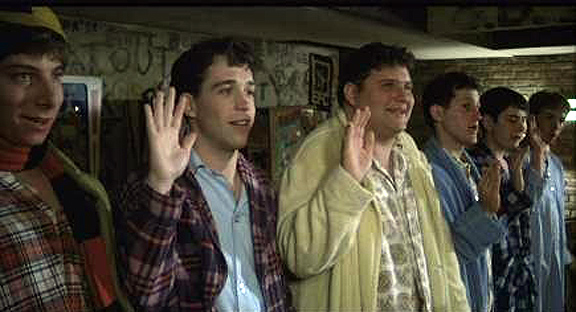 That's Dennis, "the second guy from the right, in the blue checked bathrobe."

Do not file this post in the self-help section. (For one thing, there isn't one.) A while ago, I published a frame-grab from David Mamet's "House of Games," in which I can be glimpsed as an extra. That got me to thinking about other people I know who have appeared (however briefly or peripherally) as extras, and how (or if) such experiences have affected their lives and/or their relationships to the movies. 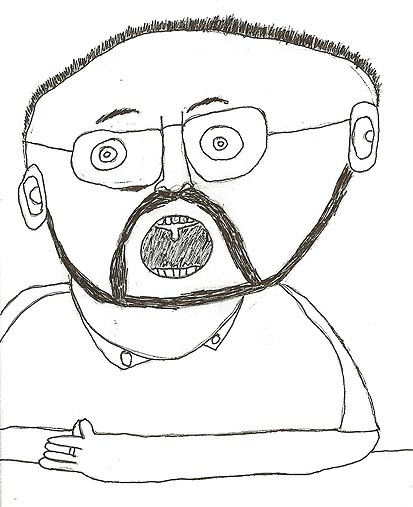 Portrait of Dad (Dennis Cozzalio), by daughter (2007). Now you recognize him.

So, I asked Dennis Cozzalio, of Sergio Leone and the Infield Fly Rule, to send me a grab of his own appearance in 1978's "Animal House," aka "National Lampoon's Animal House." (See, we were both in movies with "House" in the title.) I'm publishing it here, along with an image of Dennis today -- well, OK, it's a recent drawing of him by his daughter that I happen to think is fantastic (so much so that I printed it out and stuck it on my own fridge, even thought I've never actually met Dennis or his daughter. Is that weird?).

Now, if there's a fleeting, Bogdanovichian "piece of time" in which you figure, please do send the following to me (at the "e-mail jim" link above):

1) A frame grab, identifying yourself in the picture. 2) A (brief) description of the scene (like, one sentence). 3) A (brief) anecdote, if you have one, about your experience during the shooting of the scene. 4) A recent photo of you, so we can all witness the ravages of time -- something the movies are made to document.

Or, if you want to post something on your own blog, please send me a link. Think of this as a blog-a-thon with no deadline.

An anecdote from Dennis:

I met my best friend (known in the [SLIFR] comments columns here as Blaaagh) on the Eugene, Oregon set of "National Lampoon’s Animal House" in the autumn of 1977. I had actually seen him and another actor several months earlier performing a scene from "Of Mice and Men" at a state Thespian conference. I guess the performance really impressed me because several months later, in the dingy, stale-beer-smelling basement of the Sigma Nu house on 13th Avenue that served as the interior of the Delta house, I spied Blaaagh sitting and waiting, as we extras tended to do, to be called for the next shot and remembered his shining moment as George. In a very atypically brazen moment for this shy boy, I introduced myself, told him I remembered his performance, and I think this shocked him just enough to inspire him to have a conversation with me. We kept bumping into each other that week (pretty hard not to on that cramped set), and by the weekend we were off to see our first movies together-- "Star Wars," followed by a midnight double feature of "Monty Python and the Holy Grail" and "Jabberwocky." (See what that journal is good for?) We survived "Jabberwocky" and remain as bestest as best friends could be to this day.