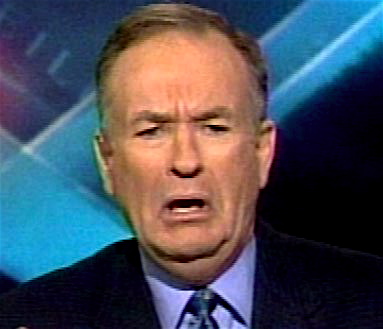 I realized as I was posting this that I'd assigned it two categories: "TV" and "Journalism." Well, I haven't associated those two terms for years -- with the exception of "Frontline," last week's definitive and indispensable "Bill Moyers' Journal" ("Buying the War," which you can watch/explore here), "The Daily Show," "The Colbert Report" and the occasional "60 Minutes." An Indiana University School of Journalism analysis reminded me of what passes for "journalism" on TV these days -- particularly on the Fox Skews Channel. The study finds that Fox comedian Bill O'Reilly uses an insult on the average of once every 6.8 seconds during the "Talking Points Memo" segment of his TV show. (I, on the other hand, use a mere 1.5 insults per sentence when writing about O'Reilly.)

From a summary of the report, "Villains, Victims and the Virtuous in Bill O'Reilly's 'No Spin Zone'" -- which offers a hilarious chart tracking O'Reilly's use of various propaganda devices and rhetorical fallacies:

Bill O'Reilly may proclaim at the beginning of his program that viewers are entering the "No Spin Zone," but a new study by Indiana University media researchers found that the Fox News personality consistently paints certain people and groups as villains and others as victims to present the world, as he sees it, through political rhetoric.

The IU researchers found that O'Reilly called a person or a group a derogatory name once every 6.8 seconds, on average, or nearly nine times every minute during the editorials that open his program each night.

Maria Elizabeth Grabe, associate professor of telecommunications, added, "If one digs further into O'Reilly's rhetoric, it becomes clear that he sets up a pretty simplistic battle between good and evil. Our analysis points to very specific groups and people presented as good and evil."

For their article in the spring issue of Journalism Studies, Conway, Grabe and Kevin Grieves, a doctoral student in journalism, studied six months worth, or 115 episodes, of O'Reilly's "Talking Points Memo" editorials using propaganda analysis techniques made popular after World War I.

A 2005 Annenberg Public Policy Center survey found that while 30 percent of Americans viewed Washington Post and Watergate reporter Bob Woodward as a journalist, 40 percent of respondents considered O'Reilly to be a journalist. [...]

Using analysis techniques first developed in the 1930s by the Institute for Propaganda Analysis, Conway, Grabe and Grieves found that O'Reilly employed six of the seven propaganda devices nearly 13 times each minute in his editorials. His editorials also are presented on his Web site and in his newspaper columns.

* Name calling -- giving something a bad label to make the audience reject it without examining the evidence; * Glittering generalities -- the oppositie of name calling; * Card stacking -- the selective use of facts and half-truths; * Bandwagon -- appeals to the desire, common to most of us, to follow the crowd; * Plain folks -- an attempt to convince an audience that they, and their ideas, are "of the people"; * Transfer -- carries over the authority, sanction and prestige of something we respect or dispute to something the speaker would want us to accept; and * Testimonials -- involving a respected (or disrespected) person endorsing or rejecting an idea or person.

Oddly, this precis does not mention one of O'Reilly's favorite methods, the Straw Man argument in which he presents a preposterous argument, attributes it to someone else, and then shoots it down, as in: Democrats hate America and want the US to be ruled by Islamofascists -- or would, if they actually believed in God or Yaweh or Allah! That's just wrong!