All about your parents 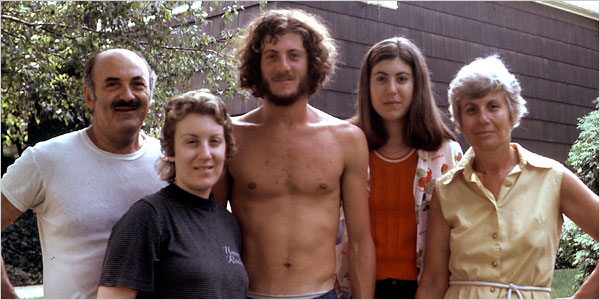 The Blocks on the block. Such a nice Jewish family.

One of the highlights of my moviegoing experience at the 2005 Toronto International Film Festival is about to become one of the best theatrical releases of 2006: Doug Block's "51 Birch Street" opens Wednesday in New York, Friday in Los Angeles and then slowly around the rest of the country from there. Check out the release schedule here. If this movie doesn't get an Oscar nomination, we'll know that there's something seriously wrong with the Academy's docu-- oh, wait, we already know that, don't we?

Although my post below is safe, I urge you NOT to read too much about the movie before you've seen it. But after you have, check out Doug's web site at 51birchstreet.com and this article that appeared in the New York Times and this one from The London Times.

TORONTO -- How much do you know about your parents' marriage? How much do you want to know? How much should you know? Those are the dilemmas faced by filmmaker Doug Block in his quietly shattering, and eventually healing, documentary, "51 Birch Street." Block's film, as engrossing as any murder mystery but without melodrama or histrionics, could be this year's "Capturing the Friedmans" -- and yet the lives it investigates are more or less ordinary ones. No, there are no accusations of child pornography or molestation as in "Friedmans," but the film is no less compelling for being about a seemingly unexceptional, unremarkable, but relatively stable and successful marriage -- indeed, one that lasted more than 50 years.

As Block has said: "I never intended to make this film. But looking back on it, I guess it was the film I was born to make." Certainly it is a film only he could have made, because it is about his own family. It's a mystery he kind of stumbled into, interviewing his parents for a "family history" video he was thinking of making, and using the camera (a la Ross McElwee ["Sherman's March"], who is thanked in the credits) as a tool for getting closer -- to his father, in particular. He didn't expect to find what he found -- like 30 years of his mother's daily journals, beginning in 1968, which were mostly about her psychotherapy and her unhappiness with his father.

"51 Birch Street" is, in some ways, an antidote to the sugarcoated myths and lies the movies have taught us about love and marriage. I wish it could be shown as a second feature to every one of those "happily ever after" movies that culminate with the wedding ceremony -- as if that was an ending rather than a beginning. (It's like they say about the difference between comedy and tragedy being dependent entirely on where you choose to stop telling the story.)

The movies teach us romantic cliches that, once we become aware of them, are leached of their potency in real life. How romantic can a moonlight walk on the beach really be when, in the back of your mind, you're thinking: "Wow, this is just like a movie! How romantic!" Or: "Wow, a Moonlight Walk on the Beach. I'm inhabiting a cliche out of a movie. Can't we come up with something more original than this?" Maybe the very idea of "romance" belongs to the movies and art and pop culture and "silly love songs" (see John Turturro's deconstructionist musical love story, "Romance and Cigarettes"). What we live is something else.

Same goes for marriage. "51 Birch Street" is an account of the disappointments, resentments, accommodations and hard-fought compromises (with oneself and one's partner) that a marriage entails. There are no heroes or villains or homewreckers or philanderers. There's just husband and wife, Mom and Dad.

I can't wait to read your comments and questions after you see it -- and maybe some of your own stories, as well...