A piece of David Cronenberg's mind

In his splendid Salon.com interview with David Cronenberg focusing on "A Dangerous Method," Andrew O'Hehir begins by noting that Cronenberg is "a beloved interview subject for film journalists" -- both because of the richness of his work and the stimulating quality of his conversation. I can testify to this, having interviewed Cronenberg several times over the years (starting with "Dead Ringers" in 1988, which in retrospect seems to have begun the second phase of his career). As O'Hehir says, Cronenberg is "a genuine intellectual in a realm crowded with poseurs and pretenders. He can talk easily about almost any topic you bring up; if he hadn't turned out to be one of the premier cinematic visionaries of his generation, it'd be easy to imagine him as a writer or philosopher or historian." Few filmmakers are as articulate about their own work.

What immediately struck me about the five paragraphs I'm about to quote -- in response to O'Hehir's first suggestion -- is the breadth and depth of Cronenberg's understanding of his own filmmaking process... and even the impetus and history behind auteurism. Cronenberg is a man who thinks when he speaks, exploring and refining his ideas as he communicates them. In the fast-serve business of media-coached mini-interviews and rigid, publicist-enforced talking points, that's a rarity.

O'Hehir raises an idea from Charles Drazin's book, French Cinema, "where he talks about the difference between old-school French movies, what they used to call the 'tradition de qualité,' mostly literary adaptations and historical dramas, and the auteurism of the New Wave, where you had to be a writer-director. It struck me that in your career you've almost gone backward, from the second kind of cinema to the first."

Well, I have a couple of qualms about that. [Laughter.] First of all, I think the initial auteur theory had nothing to do with guys like Truffaut. It had more to do with Howard Hawks and John Ford, guys who didn't write their own stuff but were being accepted as artists even within an industrial complex that produced movies. I know you know that. It's only later that people started to think of the auteur theory -- and I certainly did in the beginning as well -- as meaning that I must write my own stuff or I'm not a real filmmaker.

Yes! As I've complained recently, many people who pooh-pooh the so-called "auteur theory" (it's hardly a "theory" in the scientific sense, but merely the notion that a collaborative enterprise such as a film may have a primary author, usually the director) either display little understanding of what it is, or paradoxically reinforce it while claiming to disavow it. And much of it comes down to ignorance of how movies are actually made (see my piece about Pauline Kael's aversion to discussing "technique," "It Ain't the Meat (It's the Motion): Thoughts on movie technique and movie criticism").

It was with "The Dead Zone" [in 1983] that I had a really nice collaboration with Stephen King's book and a couple of writers, Jeffrey Boam among them. Then I thought, well, mixing your blood with somebody else actually is pretty good. As I say that, I think of evolution, and, you know, that's the health of the species. Mixing your blood with others, rather than incestuously, can produce a hearty new stock you might not have come up with before.

Leave it to Cronenberg to find a beautiful metaphor for filmmaking in evolutionary theory! Mixing creative DNA doesn't necessarily dilute the strength of the progeny; it may make for heartier offspring.

So I stopped worrying about it after "The Dead Zone," because I was pretty pleased with the movie and the experience of it, and I thought, yeah, a movie can come from anywhere and it really doesn't matter anymore. It could be an adaptation, it could come from a dream or a newspaper article or whatever. That was the moment when I relaxed about it. And I never did worry about the imprint. Creatively, it's a non-issue. When people say, well, "A Dangerous Method" doesn't seem very Cronenbergian -- I always say I prefer "Cronenburgundian" -- it's irrelevant to me. Creatively it means nothing.

As a director you're literally making 2,000 decisions a day, and no one else is going to make those same decisions. So it's definitely going to be your movie, in the sense that everything filters through your nervous system and your sensibility, and you don't have to worry about it beyond that. Whether it's obviously what people think of as a Cronenberg movie or not is irrelevant. And when I'm making a movie I forget all my other movies. It's as if they don't exist, other than the craft and the experience, which of course is there. As I say ad nauseam, the movie tells you what it wants, and you give it what it needs, in terms of style, in terms of what lens you choose for the close-ups -- the classic long lens, or the more interesting wide-angle lens where the camera's closer to the person and the background is more in focus than it would be otherwise.

Thousands of decisions a day: that's the essence of it right there. Every moment, every frame (even video can be "freeze-framed") is the result of the accumulation of thousands of (conscious or unconscious) decisions by any number of people (nearly all of them approved or rejected or modified by the director), as well as happenstance -- whether mistakes or happy accidents. 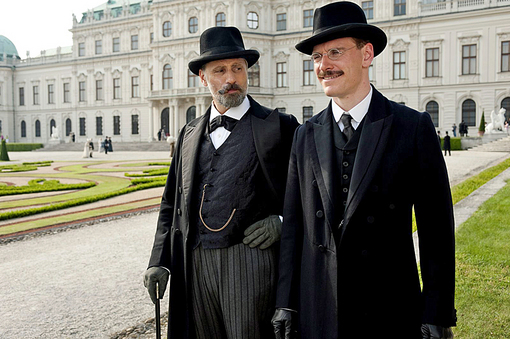 So for "Dangerous Method" I'm thinking of the feeling, the control of the era, the covering up of the body, the stiff collars and the precision. The way they thought of themselves in Vienna, as the seat of an empire, where things were really in control and had been for 700 years. You know, the emperor was old but stable, all that stuff. It gives me the sense of a style, and then you say, just for example, that a jiggly hand-held style really would not work to deliver that era. It wasn't a jiggly, hand-held era, that's what it feels like. So that gives me the formalism and stability of the style. It's not a schematic thing that I impose and that I think of upfront, in the same way that I don't do storyboards. It's an organic thing that comes out of considering all the aspects of the movie, the costuming, the people's posture, where you're shooting. The formality of the Belvedere Gardens, for example, really contributes a lot.

Sometimes "style" -- or "technique" -- feels like a condition imposed upon the film, and so I appreciate Cronenberg's description of how the setting informs the style. I found myself considering something similar while watching Kelly Reichardt's "Meek's Cutoff" (another of 2011's best movies), shot in 1:33 using tripods and dollies -- no widescreen, no hand-held camera. And it works beautifully, almost as if you were looking at old photographs, although the style isn't self-consciously old-timey. Of course, they didn't have motion picture equipment on the Oregon Trail in 1845 (the Lumieres didn't make their first movies until 1895) -- and, even if they did, the black-and-white images wouldn't look like the cinematography in "Meek's Cutoff." But these decisions pay off in terms of how the movie feels.

See: Written in the Flesh: A Crash Course in David Cronenberg