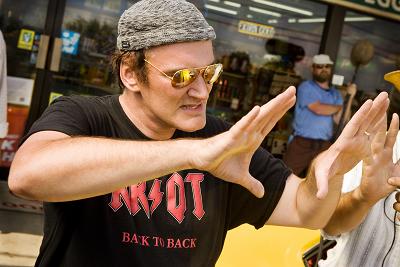 QT: Back in flack mode.

Dave Kehr points out errors in the New York Times story about the future of 3-D by Sharon Waxman (the Judy Miller of showbiz reporting), which Kehr describes as "riddled with errors and misperceptions, to the point where it is actively misleading." Not the first time for Waxman, and it won't be the last. (I had to stop reading her "Rebels on the Backlot" book because it was likewise riddled with factual errors and such gross misunderstandings of how the movie business works that it led her to draw preposterous conclusions about what she witnessed or was told.)

There's a classic line in the Waxman article from Springsteen/"Titanic" producer Jon Landau: “The screen has always been an emotional barrier for audiences. Good 3-D makes the screen go away. It disappears, and you’re looking at a window into a world.”

Yeah, that damned screen. If only it weren't there to present an emotional barrier for us. (Maybe if we removed it -- and the back wall of the theater -- the projector could just show the movie into 3-D "reality" and allow us to really feel the emotions the movie is trying to convey!) It's like the way those blasted audio speakers get in the way of our emotional involvement in recorded music. Gotta get past that...

DK also refers us to a hilariously profane (i.e., Tarantinoesque) account of the "Death Proof" press conference in Cannes by Rob Nelson of the Minneapolis/St. Paul City Pages. Excerpt:

Not that I don't appreciate the privilege of seeing a longer "Death Proof"—I positively adored it at 87 minutes on the bottom-half of the ill-fated "Grindhouse" double bill. But whoever encouraged the Cannes Film Festival to advertise its new cut at "2h07" (i.e., 127 minutes)—director Quentin Tarantino, perhaps, or (more likely) the Weinstein Co.'s Stuntman Harv—is practically begging for a long ride on the fuckin' roof of the white Dodge Challenger, sans straps. I mean, the goddamn thing is no fuckin' longer than 113 tops—I fuckin' timed it—but that didn't stop Stuntman Harv from bum-rushing the Death Proof press conference yesterday to say that "you're missing the essence of Tarantino" at 87 (pffff...), and that the new cut, when it's released internationally, "will dwarf Grindhouse—trust me." Fuck, man. Does anyone, even Tarantino, trust Harvey Weinstein at this point?

Near the end of the press conference, which had QT literally sweating with enthusiasm for his movie and its many sources, a journalist asks Monsieur Grindhouse how he feels about writers having been requested by Harvey's crew to pay $1,500 apiece for a seat at the Cannes "Death Proof" junket. [...]

... As you might've guessed, gorgeous Butterfly (Vanessa Ferlito) finally does her big Texas Chili Parlor lapdance for Kurt Russell's icy-hot villain in a scene that QT invests with as much meta-movie passion as a fuckin' car chase or shootout or samurai showdown. Butterfly's tailfeather-shakin' shit is ridiculously, hilariously hot—even, it seems, for the lady from Uzbekistan who pipes up during the press conference to thank QT for his kick-ass female-empowerment movie on behalf of "all the women of Central Asia."...

Next Article: 5-25-77: A Geek Odyssey Previous Article: Bad Waitress (Or, the Wit and Wisdom of Mr. Pink)

Bad Waitress (Or, the Wit and Wisdom of Mr. Pink)