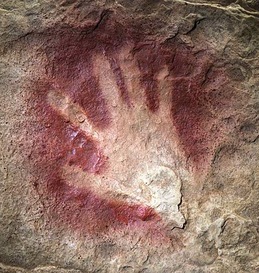 About 32,000 years ago, in a limestone cave above the Ardèche River in Southern France, humans created the oldest cave paintings known to exist. They spring from the walls with boldness and confidence, as if the artists were already sure what they wanted to paint and how to paint it. Perhaps 25,000 years ago, a child visited the cave and left a footprint, the oldest human footprint that can be accurately dated. At some time after the child's visit, a rock slide sealed the entrance to the cave. In 1994, French archeologists, searching for air plumes that might reveal the presence of a cave, found it again.

They had to descend a narrow opening to its floor, far below on the original entrance level. It is their entry route that Werner Herzog follows in his spellbinding new film, " Cave of Forgotten Dreams." which had its first screening Monday night at the Toronto International Film Festival. Herzog filmed in 3D, to better convey how the paintings follow and exploit the natural contours of the ancient walls. The process also helps him suggest how the humans of the Upper Paleolithic era might have seen the paintings themselves, in the flickering light of their torches.

Access to Chauvet Cave, named for one of its discoverers, was immediately closed off by the French government, and a locked steel door now bars the way to the air shaft. Behind that door the cave's guardians enforce a strict regime. Herzog is allowed a four-man crew, including himself. They are limited to four cold-panel lights, powered from battery belts. They dare step only on two-foot wide aluminum pathways that have been installed. They are allowed four hours. If anyone has to leave for any reason -- even to get a screwdriver -- that day's visit is over; the guardians want to shield the cave's air supply. 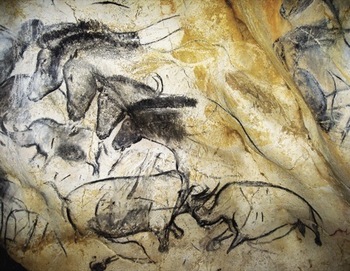 Surely men must have been painting somewhere before these cave walls were covered. It is hard to believe that these confident lines and shapes came into being without prelude. Or was there something innate in these forms? Accurate carbon dating suggests that other artists returned to the cave at least 2,000 years after the first ones, and continued the work in the same style.

Cave paintings are the earliest evidence we have of our ability for abstract thought, which is what makes us human. They come before any evidence of mathematics, commerce, or political organization above a tribal level. They seem to provide evidence of spiritual thought. There is in the Chauvet Cave a rough raised pillar on which rests the skull of a cave bear, a species now extinct. Its placement cannot be accidental; the arrangement suggests the cave painters thought it deserved special attention or veneration. These early humans coexisted in the same river valley with Neanderthal Men, who left no such evidence; our ability for abstract thought must have allowed us to win that evolutionary struggle, although DNA suggests the two species at some point were able to interbreed. 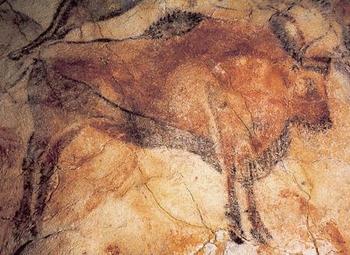 Only two very small sculptures in the cave show human forms. One is a woman, her sexual organs exaggerated to dramatize her fertility. The paintings themselves are all of animals, an astonishing variety, providing a bestiary of the valley at the time. Mammoths, cave bears, lions, bison, panthers, horses, rhinos. The rhinos have what are surely exaggerated horns, suggesting a desire to emphasize their power. Some of the drawings repeat horns and legs in an obvious attempt to depict movement. 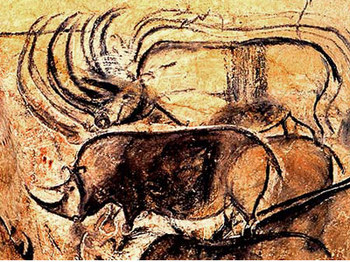 Herzog's limitation of four small portable light panels works to his advantage; as they move they suggest how the flickering torches might have created an illusion of movement in those repeated features. The space was so limited it was impossible for his crew to stay out of many shots, and their shadows dance on the walls, just as the shadows of forgotten ancestors must have danced in the torchlight. Herzog's inspiration is to show us the paintings as the cave's original visitors must have seen them. I have seen perfectly-lighted photographs of other cave paintings that are not so evocative.

Herzog says that in general he dislikes 3D. He told me this again on Monday. But there are occasions when 3D is appropriate (he named "Avatar"), and his film is one of them. It was shown with bright, well-focused digital projection. Apart from a one-shot joke at the very end, he never allows his images to violate the theater space; he uses 3D as a way for us to enter the film's space, instead of a way for it to enter ours. He was correct to realize how useful it would be in photographing these walls. To the degree that it's possible for us to walk behind Herzog into that cave, we do so. 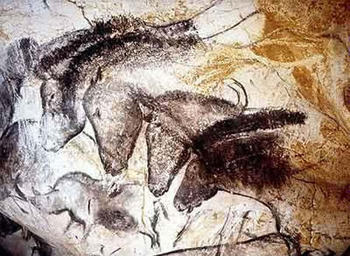 As a documentarian, Herzog is never content to simply document. There's always a transformative element. "Cave of Forgotten Dreams" ends with a "Postscript," in which he notes that not very far away France has built its largest nuclear power plant. The water heated by its cooling towers is directed into a huge tropical arboretum, where trees and ferns flourish. Crocodiles were introduced here, "and man, do they like it." Some of them have mutated into albinos. Herzog, in his inimitable accent, pronounces the words lovingly: Mutant radioactive albino crocodiles. We see their huge bug eyes popping above the water to regard us. Some day, he speculates, perhaps in thousands of years, the crocs may spread to the cave. What will they make of its paintings?

Is this Postscript typical Herzogian whimsy? Yes. But more. There are connections between "Cave of Forgotten Dreams" and at least two other Herzog films, undoubtedly more. Beneath the surfaces of his work coil hidden archetypes, hinting at his conception of our role in the immensity of space and the vastness of time. 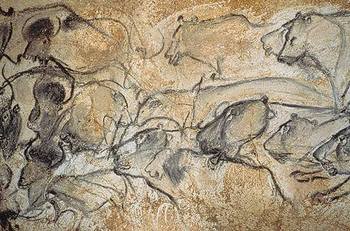 Thinking of the cave, I am reminded of another cave, one carved out of ice far beneath the surface of Antarctica. He visits it in "Encounters at the End of the World" (2007). This cave scientists used as a time capsule to store their records. In its walls there are niches which contain small personal possessions -- photographs, valued objects, things with meaning to the niche-builder. These are talismans saying, "I was here." The low temperature and humidity will preserve these objects indefinitely. Herzog wonders what an alien race, far in the future, might make of them.

The ice cave preserves some part of our nature into a future long after we have disappeared. The Chauvet Cave has preserved part of the nature of these early men far into their future, after they have disappeared. Thus do living beings, bound by time, strive to preserve some expression of their minds. For without abstract thought, animals have little conception of Time beyond the evolutionary necessities of Earlier, Now, and Later. So we beat on, boats against the current, borne back ceaselessly into the past. 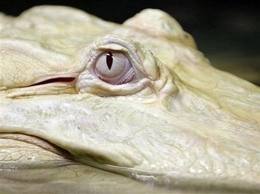 Now as to the Mutant Radioactive Albino Crocodiles. Yes, there goes that Herzog again. We are reminded of the iguanas in his "Bad Lieutenant: Port of Call, New Orleans" (2009), and the shot in which Nicolas Cage regards an iguana uneasily, and it returns his stare implacably. Another shot in which an alligator at the side of a road the stares at the corpse of another alligator which has been flattened by traffic.

Ever since I first read them, these words by W. G. Sebald have remained with me: "Men and animals regard each other across a gulf of mutual incomprehension." This is true. Even with an animal as seemingly readable as a dog, what I believe the dog is thinking must be very different from what the dog thinks. Of cats, lizards, whales and birds, I have no remotest conception.

We see the albino crododile. It sees us. We see a "mutant radioactive albino crocodile." It sees...us. Men of 32,000 years ago saw cave bears. They saw their shapes, their movement, their nature. They created meanings for them. They objectified them. They drew them in a representational medium. They depicted three dimensions in two. They suggested movement in static drawings. They crawled far into a cave by torchlight to create these paintings, for reasons that had importance for them. Reasons. Does a cave bear have reasons in this sense?

That we can think in abstractions and imagine one reality in terms of another is what rescues us from the bondage of the present moment. In this ancient cave exist the earliest signs we have found of the abilities that created our history, and the fact that we can even conceive of history. In this cave is enshrined the possibility of you, and me, and Werner Herzog, and everything we can conceive us, including aliens visiting to look at some few shabby talismans of our existence. 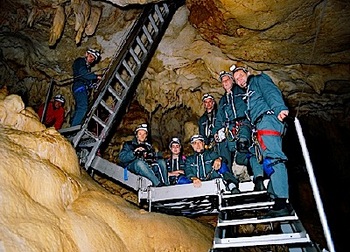 ☑ Directory of recent entries in my blog, Roger Ebert's Journal.

Next Article: A seance with Errol Morris Previous Article: Werner & Errol & the images in their caves

A seance with Errol Morris