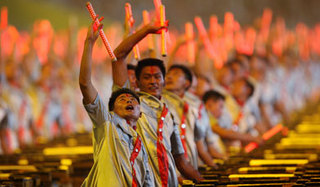 I was one of the allegedly three billion people watching the opening ceremony of the Beijing Olympics on TV, and I think I received the intended message: China is here, big time. The scope, precision and beauty of the production was, you will agree, astonishing. The distinguished director Zhang Yimou was given $300 million and full rein of his imagination, and perhaps some of his background in opera was also useful. The sheer size of the production was awesome. It said a lot for China, both positively and perhaps negatively. With the exception of the star pianist Lang Lang, a duet between Sarah Brightman and Liu Huan, and some featured dancers, the emphasis was not on individuals, but on masses of performers, meticulously trained and coordinated. What was your reaction to the opening spectacle of 2,008 drummers, creating waves and shapes of lights with their drums? Mine was amazement and pleasure. Also a reflection of the discipline and dedication of these unpaid drummers. You could see the little earpieces with which they apparently received cues; you could imagine the performance otherwise breaking down into chaos.

It was the same with the performance based on cubes that rose and fell, seemingly controlled by digital means. I was blindsided when the human beings beneath the cubes revealed themselves. Such precision. Such dedication. Four months in rehearsal, eight hours a day. The effect of the presentations was enhanced, even created, by the colorful, exuberant costumes, many designed by Eiko Ishioka ("Mishima: A Life in Four Chapters," "The Fall"), the Oscar-winning Japanese designer. I was even moved by the Chinese cheerleaders who danced and waved, forming a ring around the entire track for the parade of nations. They didn't stop for more than two hours. The heat was 85 degrees, the humidity high. I looked closely, but couldn't spot a single young woman who had collapsed or fainted. Their task in itself was an athletic feat.

Our Chicago mayor Richard M. Daley and his first lady, Maggie, were in the audience in the stadium. The city is making a bid for the 2016 Olympics. What was Daley thinking? How to compete with this ? He can forget about it. The ceremony was one of a kind, possibly never to be equaled. How can a city compete with the world's most populous nation? What other Olympics will have a $300 million budget for the ceremony? Certainly this was the most expensive theatrical spectacle in history. 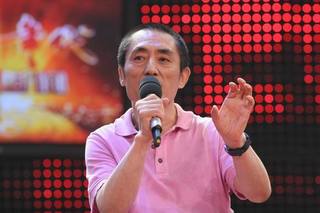 It is little hard to imagine Chicago (or Rio and our other competitors) finding 2,016 unpaid volunteers to rehearse endlessly for an opening performance. But we wouldn't expect it. The closest America comes to a production like this is probably the halftime show at the Super Bowl. Although our universities have marching bands, our emphasis at the Super Bowl is more often on individuals, even if they are Janet Jackson. We are just not inclined to present thousands of painstakingly drilled performers. The closest sight I have seen to Friday night's spectacle, and I mean this objectively, not with disrespect, is the sight of all those Germans marching wave upon wave before Hitler in "Triumph of the Will."

I have a feeling Lang Lang represents more than he realizes. He represents the cult of the individual in a nation that has placed emphasis on the collective. The TV cameras disappointingly showed only a brief closeup of the exuberant star, but I got a better idea of him on a segment of the Today Show a few days earlier. You cannot picture him playing in synch with a hundred or a thousand other pianists. I am not sure individual superstars are any better than collective spectacles; my ideal would be one citizen, one piano. But Lang Lang today means "Chinese Idol" tomorrow.

When I was in Catholic grade school, we were taught about "godless Russia." I always pictured it crouching under dark, lowering skies. The Chinese were godless Communists too, but I hardly pictured them at all; just confused images of countless little people with chopsticks and pigtails. Yao Ming wouldn't have fit into my picture. China in those days had a pathetic economy. Communism wasn't working. Its death throes were the Cultural Revolution. Today, from a standing start, China has the world's third largest economy. We are first, but sinking. They're rising.

The irony, for a nation that still calls itself Communist, is that China and the Chinese are born capitalists. Travel around the Pacific Rim, and you'll find them doing business everywhere. When I was on Bora Bora, there was only one store. Owned by Polynesians? No, Chinese. The Chinese hold a mortgage on America. If they were to cash in the enormous chunk of our national debt that they own, we'd be out of business. We are destroying ourselves by spending money we do not have. To cut taxes and raise spending, our national policy under Bush, is suicide. In a century or two, our most lasting world heritages may the idea of personal freedom, and the role we played in helping make English an international language. But we could be a bankrupt nation.

Back to the Olympic ceremony, which inspired some of these thoughts. I have developed a much improved vision of China since my grade school days. But on opening night, it was provided with countless more images and ideas. I thought it was only rhetoric when I heard that the 21st would be the Chinese Century, just as Henry Luce called the 20th the American Century. It wasn't rhetoric. Now I have a better idea what they were talking about. Their national leader is no longer the cartoonish Mao, but president Hu Jintao, who looked every inch a modern executive in his well-cut suit and quick smile. Did you see our president, tapping his little American flag idly against his knee?

Postscript: Zhang Yimou, who directed the sensational opening ceremony of the 2008 Olympics, is one of the world's leading filmmakers. Ten of his films are reviewed on this site, and one of them, "Raise the Red Lantern," is in the Great Movies Collection.

From that review: Zhang Yimou (born 1951) is a member of the "Fifth Generation" of Chinese filmmakers, those who began working after the Cultural Revolution and dealt with Chinese society in a more open and artistic away than was permitted at the height of Maoism. Not all of the generation's films were approved by Chinese authorities for wide domestic release, but they were a valuable source of foreign exchange and found world audiences. "Raise the Red Lantern" tied for the Silver Lion at Venice and was nominated for an Oscar.