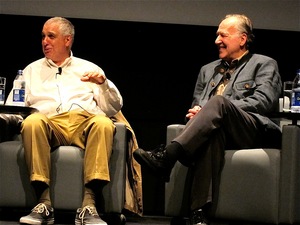 Werner Herzog and Errol Morris have been friends for a very long time, from the days in the 1970s when Morris saw Herzog's first films at the Univ. of Wisconsin and decided to become a filmmaker. Errol told Herzog of a film he wanted to shoot, but kept delaying. Herzog told him he needed more self-discipline. He added: "If you make this film, I'll eat my shoe."

That led to a famous evening at the Pacific Film archive in Berkeley, at which Herzog sat on the stage and did indeed eat his shoe. He was assisted in its preparation by the famous chef Alice Waters -- perhaps suggesting that you can find everything you don't want at Alice's Restaurant. The meal was the subject of a famous documentary by Les Blank titled "Werner Herzog Eats His Shoe."

On Sept. 13, 2010, Morris and Herzog both premiered their new films at the Toronto International Film Festival: Herzog's "Cave of Forgotten Dreams," a 3D documentary about cave paintings 32,000 years old; and Morris' "Tabloid," about the UK tabloid sensation "The Case of the Manacled Mormom." Earlier in the day, they held a conversation at TIFF's new Bell Lightbox. Herzog questioned Morris' slow process of post-production, Morris suggested you could find strangeness as easily in Van Nuys as at the ends of the earth, they discussed a book of letters written to a dead dog, and then talked about their own voracious reading.

They discussed single shots in detail: A shot repeated five times in "Tabloid" of the heroine repeating the same thing, and a shot in "Grizzly Man" when the hero disappeared into some grasses and wasn't seen for an extended period. Morris realized their favorite shots had both been photographed by their subjects themselves. Yes, said Herzog, but the secret is to recognize them. He found his shot discarded by a subeditor.

In April 2010 in Boulder, Herzog looked ahead to filming in the Cave. (Scroll down to two videos.)    A photograph taken after the discussion of Lena and Werner Herzog.