Weaker at the broken places

They are two people accustomed to ruling their physical domains with muscle, sex and beauty. They don't ask themselves a lot of questions about what could stand some improvement in their inner lives. They will rely the powers given them. Ali is powerfully-built and roughly handsome. He dreams of becoming a champion of mixed martial arts fighting. At present he is a nightclub bouncer, firmly exercising control over the hopefuls swimming out of the night. Stéphanie is a trainer at a seaquarium, using body language and dead fish to command a tank filled with whales to rise up from the water. They live near Cannes, celebrated for launching more successful people up a red carpet.

Ali is presented with a challenge he can't train for. He takes responsibility for his young son Sam, At the seaquarium, Stéphanie is majestically ordering a killer whale to rise up a few feet in front of her while sunburned tourists applaud and drink their colas. An incident occurs in which she loses both of her legs.

She goes into rehabilitation to be fitted with prosthetic legs and learn to walk on them. I've met some like her at the Rehabilitation Institute of Chicago, walking down the corridor in a harness suspended from a rail in the ceiling. On one of my visits I met a beautiful young woman who virtually overnight lost both hands and both feet to one of those blood diseases. She had three small children, one under 2. She'd passed through the first steps in recovery and we were in the same Hands Class together, exercising our upper bodies. Swinging our arms. Making angels. She did it as if she had hands. Her husband was there for her. You could see how he loved that woman. She was always upbeat, calling me Rog, being funny, snapping her gum. She told me she would learn to walk, drive a car, and raise her children. How she brought herself to that position, I have no idea. What I didn't see was what must have been her horror and despair as she first realized what was happening to her. That's the stage we live through with Stéphanie, bitter and depressed, as the physical therapists do what they do. At first she can hardly bring herself to open her eyes in the morning. In the prime of life, magnificent in her wet suit, queen of the whales, torn nearly in half. 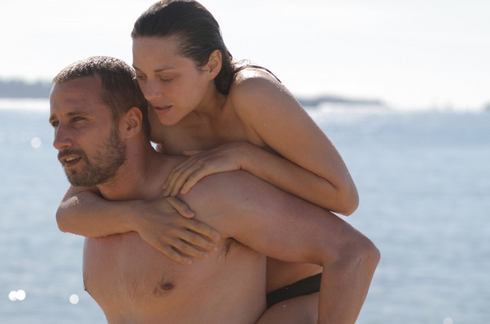 One day she connects with Ali. How do these things work in the mind of a man? She still a has what he needs. They make love and it works. They meet regularly for sex. A relationship is not in the picture. They exchange text messages. Is he up to it? A rain check? This leads eventually to her driving along with him and his boy as he enters himself in local cage fights where spectators place their bets as if they were dogs or cocks. The sleazy operator who runs these contests knows his crowd likes to see the fighters so bloody and broken the fights can't possibly have been fixed. If Ali wins, he's sent back into the cage the same day to "defend his title." The spectators would be able to live with themselves if he were killed. Stéphanie finds that she could not. ("Say, how did you two meet?")

Jacques Audiard, who directed this film, is interested in what remains of people after something has been lost. His Oscar-nominated "A Prophet" (2010) was about a devout man who by learning to kill in prison saved his life but lost his innocence. Stéphanie and Ali have kept their genitals and begin to build from that base.

Ian Backwater wrote a thoughtful essay in the Atlantic reporting, "The hive mind has spoken, and the theme at the art house this Oscar season is disability." He compares "Rust and Bone" with "The Sessions," "Amour" and "The Intouchables." He concludes: "While 'The Sessions' isn't a bad movie, despite the over-the-top festival buzz and effusive praise, it left me without the euphoric feeling so many others seemed to get from it. It took Audiard's thornier take on the subject matter to help me understand why: to truly pull off a feel-good story about disability, it helps a lot if a film can make you feel bad at some point." 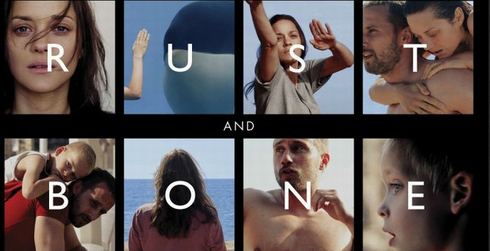 "Rust and Bone" spends a good deal of its running time making you feel bad. It's making you feel bad even while Ali and Stéphanie are making themselves feel good. Sex like theirs is like masturbation with a disinterested witness. Their orgasms are like one of Ali's victories in the cage. They get what they came for and are left feeling beaten up. A shift takes place: It's bad enough losing your legs, but look at what you're doing with what's left. Does affection in this film begin with shared pity? Does Ali's child Sam make them a family that can't seal the deal? They all drive out to the fights together so she can mind the kid while he's watching his dad being beaten to a pulp. It's the mockery of a family.

Marion Cotillard's range reaches from her Oscar-wining work as the Little Sparrow, Edith Piaf, in "La vie en Rose" (2007), to this extreme where she's partnered with a man she has nothing in common with. She is a woman who needs care and attention, and he's a hulk from Belgium who has to move in with his sister and her husband.

Matthias Schoenaerts played another muscle-bound loser in Michael R. Roskam's "Bullhead" (2011), also an Oscar nominee. In that one he's a man who was traumatized by an early sexual revelation that makes him painfully insecure about his sexuality. He works for his uncle, who raises hybrid cattle, and begins to inject himself with testosterone and animal-growth hormones, turning himself into muscle and body mass. The supplements have turned him into a raging bull. The performances illuminate each other. Bullhead has shaped himself into a grotesque body builder who is a caricature of the man inside. Ali dreams of the shabby payoffs for a MMM "champion," and trains his muscles to absorb more pain and punishment--more defeat--than his opponents. What those two seek, they can't reach from here.

As for Stéphanie, like many women she sees Ali for what he is, and she's willing to bargain. She knows Ali is such a mess she wouldn't have settled for him in her prime. She physically conquers her dreadful accident and it's clear her struggle hasn't improved her emptiness. "You're stronger at the broken places," they say. I've been there, and you're not. If they are going to get better they'll have to start by using the fractured parts. "Rust and Bone" is the story of how they are forced to put weight on the load-bearing bones.

They start a long way down from that, even before the incident . Their climb is high, their effort the kind they have always avoided, what victory they have is earned. Ian Buckwalter is correct: I felt better for them than the couple in "The Sessions." That was a good film about a man in an iron lung who wants to have an orgasm before he dies. He starts off at ground zero, so to speak, and the only way to go is up. Emotionally, Ali and Stéphanie start on the floor and have to haul their way up into the iron lung.