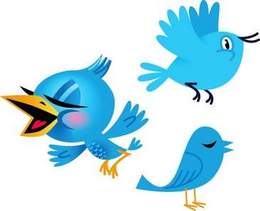 I vowed I would never become a Twit. Now I have Tweeted nearly 10,000 Tweets. I said Twitter represented the end of civilization. It now represents a part of the civilization I live in. I said it was impossible to think of great writing in terms of 140 characters. I have been humbled by a mother of three in New Delhi. I said I feared I would become addicted. I was correct.

Twitter is now a part of my daystream. I check in first thing every morning, and return at least once an hour until bedtime. I'm offline, of course, during movies, and don't even usually take my iPhone. The only tweeting I've done with mobile devices was when our internet went down one day, and when my laptop was lost in Cannes. But you can be sure that before I write the next three paragraphs I will tweet something.

Twitter for me performs the function of a running conversation. For someone who cannot speak, it allows a way to unload my zingers and one-liners. One of the problems with written notes and computer voices is that, by their nature, their timing doesn't work. I used to have good timing. Now in real life a conversation will be whizzing along and a line will pop into my head and by the time I write it down and get someone to read it, the moment and the context will have disappeared. Often everything will grind to a halt while I remind people what I was referring to.

As for computer voices, yes, it will be great to get the final version from Scotland of the voice that sounds like me. But I will still have to type before I speak. There was a warm response when Chaz and I unveiled the voice on the Oprah program, but unfortunately some people got the wrong message. "Ooh," I was told, "now you have a computer to speak for you!" -- as if the computer could listen and responded on its own. If Cereproc in Edinburgh can do that, they will have perfected Artificial Intelligence.

Also what I do is, I listen, and type on my laptop, and I have a speaker attached, and the voice speaks what I typed. The problem is, the conversation races ahead, and I am forced to (1) wait for my opening, or (2) interrupt people. Of course we interrupt each other constantly in everyday life, even using little strategies like nodding and sneaking in a "but..." as a marker to indicate we have something we need to say. Sneaking in via computer speaker, on the other hand, sounds loud, mechanical, and rude. And I'm still behind the beat. With a Tweet, what you are saying is all right there. Not an interruption. Not late. Not badly timed. Just itself. I can have timing on Twitter that is impossible to me in life.

There are millions of Tweeters, or Twits, as I prefer to think of us, and no doubt many of them are bores. Try reading the real-time stream if you dare. Those I follow give value for time. I'll get a retweet from someone, and if I like it, I'll go to that person's Twitter page and scan 20-30 Tweets and make a judgment call. Some of my discoveries may only have a dozen followers, but I have a sixth sense.

My rules for Twittering are few: I tweet in basic English. I avoid abbreviations and ChatSpell. I go for complete sentences. I try to make my links worth a click. I am not above snark, no matter what I may have written in the past. I tweet my interests, including science and politics, as well as the movies. I try to keep links to stuff on my own site down to around 5 or 10%. I try to think twice before posting. 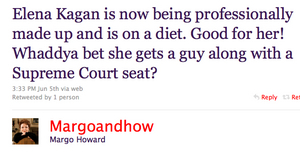 This has become addictive. I tweet too often. I actually go looking for stuff to tweet. I have good friends who suggest things. I will tweet a link someone suggests on this blog. I will tweet good lines from comments here (with credit). I like to retweet. Sometimes I do a thing called Tweeto, where I retweet three new followers. I was doing this daily, but have scaled back because it was keeping me up too late.

I've made a change recently. After writing my blog, "The quest for frisson" and reading two recent articles about internet addiction, I have looked hard at my own behavior. For some days now I have physically left the room with the computer in it, and settled down somewhere to read. All the old joy came back, and I realized the internet was stealing the reading of books away from me. Reading is calming, absorbing, and refreshing for the mind after hectic surfing. Chaz and I have quiet chats where we sit close and she talks and waits for my reply and this is soothing after the online tumult. I like the internet, but I don't want to become its love slave.

But still I tweet. I am in conversation. When you think about it, Twitter is something like a casual conversation among friends over dinner: Jokes, gossip, idle chatter, despair, philosophy, snark, outrage, news bulletins, mourning the dead, passing the time, remembering favorite lines, revealing yourself. 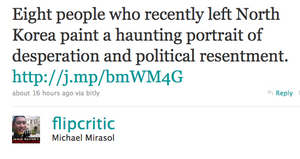 Now I want to share some of the people I follow. I can't share them all, and will have to leave out some dear friends. All I can say is, if I follow you, that speaks for itself. One thing you will find is that many of these tweeters are women. I follow a lot of men, but I'm convinced women make the best tweeters. They tweet more about life, and less about facts. Okay, so tell me I'm wrong. 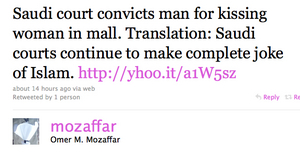 What I look for are people who generate a fair percentage of Tweets while speaking in their own voices. You'd be surprised the number of people who only retweet all day long. I like people who tweet great links. I'm not so much looking for news; I get that in the usual way. It's more fun to get news indirectly. For example, @caponeAICN tweeted that from his porch facing Wrigley Field he could see four helicopters. You might ask, what did that mean? With my razor-sharp intellect, I intuited: The Blackhawks had won the Stanley Cup, fans had gathered at Wrigley, and TV news was showing the crowd. I already knew about the Blackhawks, and Capone assumed I had: The mark of a good Tweeter.

I find out a lot about television itself the same way. @bleakey, for example, watches TV for me so I don't have to watch it for myself. Many other Tweeters also do, but I like @bleakey's intensity. She cares more about "Dancing with the Stars" than anyone on the show. Then she'll say something that reveals she is smart, funny and not just a couch potato. @kellyoxford tweets so well she was actually flown to Hollywood to meet with TV executives. @oliviacollette always has an unexpected angle on things, and had lots to say about the "Husband Unit" during her recent honeymoon in England and Spain. I look for people like that. @sunsetgunshots is an example of a Tweeter with a high percentage of good links: She's obsessed with film noir, and has a knack of turning up stuff I didn't know but find out I always wanted to. 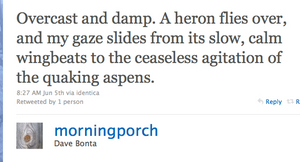 My day follows a familiar pattern. In the morning, I'll find a poetic tweet waiting from the wonderful @natashabadhwar, who is a filmmaker and photographer in New Delhi and most of all a mum of three. It will have already been today for a long time in India. When you follow one great Indian Tweeter, you tend to come across several more. In the morning they're all waiting for me. There is @nancygandhi, an American living in India, who says she is a "paragraphist." I don't know anything about @RajeshJoshi except he travels widely, injustice makes him mad, and he writes well. @shubhragupta and @anupamachopra are both film critics, often writing about western films. 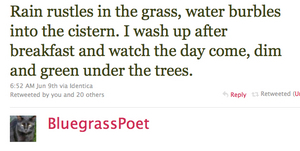 In America, in the morning, @morningporch sits on his porch with a cup of coffee and tweets mostly about what he sees. @bluegrasspoet says she is a poet and lives in Kentucky. No kidding. @etherielmusings has winsome small observations, and rampant romanticism. When I visit any one of the Twitter streams listed in these two paragraphs, Indian, Canadian or American, I find the others retweeted. From halfway around the world, one degree of separation. 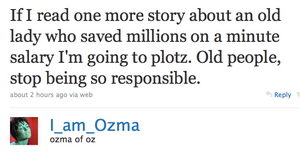 The two most avid sports fans I follow are women: @christylemire, the film critic of the Associated Press, and @joanwalsh, the editor of Salon.com. I had to unfollow one guy because he would tweet every single run, basket, touchdown, goal, etc., of the game he was watching.

One of the best Tweeters on politics is @flipcritic, a Filipino working in Malaysia. @markos is the founder of DailyKos, and tweets tirelessly about state races, polls, scandals and predictions. @margoandhow, who I personally dragged kicking and screaming into Twitter (telling her she was a born Twit, which she didn't like the sound of), is into politics and gossip. Her mother was Epie Lederer (Ann Landers), and she's a chip off what she calls the Old Lady. @dustytrice is a Democratic party strategist from Minnesota and has a deadly wit. @tinadupuy is a liberal columnist Los Angeles. 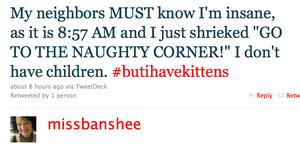 There are a lot of Tweeters who are funny, in addition to being many other things. @I-am-Ozma can be indignant, sad, passionate, and wonderfully snarky. So can @mozaffar, who teaches Islam and patiently, peacefully, moderately defends his idea of his faith against hate from without and within. One of the smartest Tweeters is @georgelazenby, whether or not he is the George Lazenby. I think there's a good chance he might be, because he doesn't make any such claim in his bio. 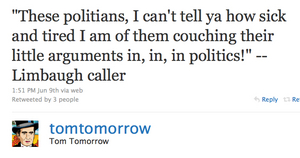 No one lives her life on Tweeter more urgently than @missbanshee. Every day is an unfolding emergency of panic attacks, searches for blog topics, mourning for a cat, computer emergencies, adoption of three cats, despair, and then things growing so dire that she "*throws self on fainting couch.*" Another life in progress is @DCDebbie, who blogs about a personal life in which she seems clearly heroic, and bitches on Twitter about her sex life and Glenn Beck.

And there are many more. Chicago friends. Movie critics from all over the world. McSweeney's magazine. Scientific American. Facets Cinematheque. And on and on and on. Funny thing. I'm spending more time in conversation these days than I ever have.