The Oscars are outsourced 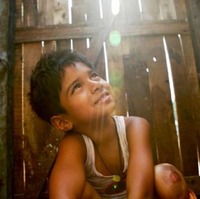 The full-screen In Memoriam montage is linked below.

It was the best Oscar show I've ever seen, and I've seen plenty. The Academy didn't bring it in under three and a half hours, but maybe they simply couldn't, given the number of categories. What they did do was make the time seem to pass more quickly, and more entertainingly. And they finally cleared the logjam involved in merely reading the names of the nominees. By bringing out former winners to single out each of the acting nominees and praise their work, they replaced the reading of lists with a surprisingly heart-warming new approach.

I had a feeling Hugh Jackman would be a charmer as host, and he was. He didn't have a lot of gag lines, depending instead on humor in context, as when he recruited Anne Hathawy onstage for their duet. His opening "low budget" song-and-dance was amusing, and we could immediately see how the show would benefit from the reconfigured theater.

By moving the orchestra onstage and replacing a traditional orchestra pit with the semi-circled seats of nominees, they made the Oscarcast feel a little less like a show, a little more like a party. The new design also made possible a crucial new camera shot, looking directly at the nominees from behind the presenters on stage. The looks in the eyes of Viola Davis, Marisa Tomei and Amy Adams as they were praised by Oscar legends was dramatic--infinitely better and less sadistic than the traditional practice of framing the nominees in little boxes so we could see the instant reactions of the losers. It's often said "the real award is the nomination itself." This presentation style rewarded the four eventual losers with a closeup and the praise of a peer--their payoff for having taken untold efforts to make themselves look fabulous on their big day.

There must have been cheering in the streets of Mumbai. Earlier there were shots of public prayer vigils on behalf of the film. As one "Slumdog" winner after another came to the podium, I imagine some Indians felt elevation similar to that experienced by Chicagoans during the Grant Park telecast on the night of Nov. 4: At last, recognized and vindicated. After the terrorist events in Mumbai, do you imagine there was a general feeling of uplift and relief? Did you notice how many of the "Slumdog" winners were Indian?

Nice that Anil Kapoor was in the room. The Bollywood star with the warm smile is a huge favorite back home. And all the kids worked the red carpet like seasoned pros. Dev Patel and Freida Pinto had great chemistry together--no, not that kind, the kind that means they play off each other nicely. Patel said something you rarely hear on the red carpet: "You're being too modest." 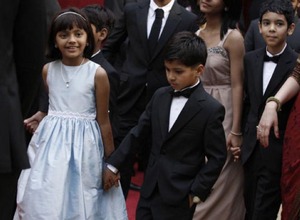 My predictions were right in 11 of the top 14 categories. I was wrong about Viola Davis, cinematography and best foreign film. My educated guesses got me 5 of 6; my Elevated feelings would have scored 4/6. Is there anything less interesting than Oscar predictions after the show is over?

I worked live on the red carpet for WLS, KABC, KRON and other ABC-owned stations for many years, but of course all that is over and done with. It is hard to get out in one piece, let alone do well. I watched the live red carpet coverage on E! and thought Ryan Seacrest did the job about as well as it can possibly be done, under the circumstances. It's amazing how, under pressure, you can forget names and credits. Over on the ABC network, a red carpet guy actually asked Sarah Jessica Parker to introduce her date. If you don't know what a howler that was, I'm not going to tell you.

Seacrest's E! coverage was sadly interrupted by innovations by producers with way too much time on their hands. One was an overhead PinpointCam which had boxes with star's names and long, thin arrows pointing to the dots on the red carpet that were allegedly the star's heads, so you could see that, gasp!, Brad and Angelina were way down there, and currently four feet apart!

That was useless, but harmless. More alarming was the employment by their Fashion Guru of one of those magic markup pens used by football commentators to show you how somebody scored a touchdown. This guy was using it to superimpose wavy lines on top of freeze-frames of actresses posing in their gowns. "...these ruffles here...the off-the shoulder look, off this shoulder...these bangles on her wrist." The effect was not unlike graffiti.

In my coverage of the Indie Spirits on Saturday, I wrote: "...the Oscarcast is unlikely to equal anything like the Indies' use of actors to portray two of the presenters as a raging Christian Bale and a catatonic Joaquin Phoenix." Was I ever wrong. This years 'cast felt looser and more irreverent, and there was Ben Stiller in a beard as Phoenix. Now even David Letterman thinks he might have been deliberately goofed with Joaquin's famous appearance last week. Wouldn't it be ironic if the Phoenix hip hop act isn't a put-on, and he really is going through a nutzoid phase?

[Monday p.m.: I've given Stiller's bit some more thought. Yes, it showed the Oscarcast as looser, but was it a good idea? (a) If Phoenix is having some kind of a breakdown, it was cruel; (b) if he isn't, Stiller was essentially promoting that rumored Casey Affleck documentary; (c) what did the alleged millions watching around the world make of it? (d) although Natalie Portman bravely carried on with grace, it's obvious no one thought in advance about how she should react, and (e) although ad-libs on the show can contain zingers, should the scripted parts get involved with material like this? At the Indie Spirits, yes. Not at the Oscars.] 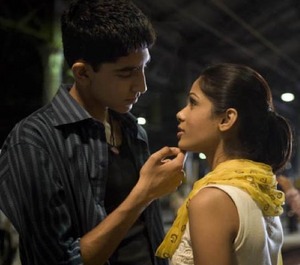 Dev Patel and Freida Pinto as lovers destined since childhood

After the ceremony was over and my story was filed, I went surfing to see what others felt. My first, and last, stop was an astonishing live blog by the usually sane Nikki Finke, here, until it's taken down. Did she overdose on the mean pills? She has a perfect right to her opinion, but see how angry and bitter she is, how vitriolic her hyperbole. The show was too gay? Because Hugh Jackman sat on Frank Langella's lap? Jackman's opening number was the worst ever? Even worse than Rob Lowe dancing with Snow White? He shouldn't have had a lawn chair as a prop? She writes: "This is the Oscars, people, a celebration of the movie industry, not some low-tech Off-Off-Off Broadway musical" Do you think maybe she didn't get the joke?

Finke took off the gloves, so I'm also going to. I suspect I have a clue why she was so livid at the show's producers. Finke prides herself, usually with good reason, on the accuracy of her scoops. This year, her inside sources fed her misinformation and she fell for it hook, line and sinker. Even the Independent of London led with her column, writing in its pre-show lead: "George Clooney, Nicole Kidman, Angelina Jolie, Jack Nicholson and Kate Winslet all declined invitations, according to an exposé on the Hollywood journalist Nikki Finke's website." That's funny. I'm sure I saw all of them on the show except Clooney, who apparently really did have a reason he couldn't be there.

[Monday p.m.: Nikki Finke says on her blog that the London Independent, and therefore me, incorrectly read what she wrote. I am guilty of finding the quote above on the Independent's web site. When I went to Finke's site, I found her "Live-Snarking the Oscars." Finke explains she never said those stars "wouldn't" be on the program [as presenters], but that they didn't "want" to be. Point taken, although it was not expressed with crystal clarity. I was reckless in assuming her negative tone was inspired by pique at the show's producers. I guess she was just genuinely pissed off.] Nikki Finke rained, but my parade continues. Having survived so many Oscarcasts, I deserved to see a good one. And yes, I've always seen the Oscars on TV just like everybody else. After the red carpet duty, I join my fellow ink-stained wretches backstage in the press room, and we follow the events on overhead TVs. One year at the Shrine Auditorium, we were actually outside in a tent. This was a good show, and that's that, and all I can add is the headline proposed by the brilliant Joel Carlson of our night news desk, which you will find at the top of this entry.

[Tuesday a.m.: Having now read some 130 comments, I can conclude there is one thing everyone agrees with about the TV presentation: The In Memoriam montage was utterly botched. The weird and swooping camera angles made it impossible to identify many of those remembered. They seemed chosen to center on the performance, and were treated visually as a sidebar. As one reader observed, the applause at the end for Queen Latifah (who sang wonderfully) sounded strangely like applause for the honorees having died.]

The In Memoriam montage we never saw:

If Mickey had won, maybe this is what the world missed: