The man with his name

What exactly happened when Clint Eastwood was onstage at the Republican National Convention? The one thing we can agree on was that it was unexpected--by the Republicans, by the audience, perhaps even by Eastwood, who we now know was ad-libbing. It takes brass balls to ad-lib for 12 minutes in front of 30 million people on live TV, just working with yourself and an empty chair.

Two days later, not a word of Romney's acceptance speech has entered the public discourse. But Eastwood's dialog with a chair has entered forever into political legend, and it's amusing to read reports that his viewers from around the world were mystified. Iranian Facebook pages "treated it with suspicious befuddlement," an Atlantic blog reports, and in China the speech is being used to teach English on a web site. The headline says, "Gelivable English Langauge Teaching: Exchange Cooperation Model Innovation," says the Atlantic's Max Fisher, who adds: "I don't know what that means, either."

In Iran, China and probably a good many other nations, Clint Eastwood is better known than Mitt Romney. He is the John Wayne of this time, an American icon, a bigger world star for longer than anybody else. If Eastwood's words puzzled most of his viewers in this country, what did they make of them globally? A British editor of mine once told me that the greatest difference between British and American journalism is that the Brits understand irony, and we do not. Still less, perhaps, is much of the rest of the world tone-deaf to irony.

After watching the Eastwood speech several times, I believe that what we saw was a combination of two speeches: (1) Clint delivering what was intended as ironic wit, and (2) his half-hearted attempt to recycle some of the "talking points" we now know the GOP staff pumped him with backstage. Speech One was a miscalculation and Speech Two contained some of the right words floating in a muddled void.

Speech One: Talking to the chair. Bob Newhart tweeted that Eastwood was channeling his act. Waiting backstage, Eastwood must have been convinced his imaginary conversation would be funny. But when the ObamaChair told Clint to tell Romney to go fuck himself, that was a mistake Newhart never would have made. It wasn't accurate about Obama. It didn't fit a popular perception about Obama, and so it lacked zing. Both the chair and Eastwood were playing Eastwood.

It's possible that the audience did Clint no favors. He was greeted with the ecstasy you might expect if Michael Phelps turned up at a high school swim team banquet. They took his appearance as a compliment to themselves; here was a legend, granting recognition to them. The audience cheered, laughed, stood up, sat down, stood again, waved signs, and in their reaction shots showed little sign that they were listening intently. After days of political speechmaking of numbing sameness, here was a movie star! Doing a shtick with a chair! Blessed relief!

Reaction shots of Ann Romney and Paul and Janna Ryan were more revealing. They knew that cameras are always trained on them. They smiled. Controlled smiles. They didn't laugh. When Ryan turned and said something to his wife and she smiled and nodded, do you imagine what he said was, "This is going great!"

Clint paused and smiled from time to time as the crowd cheered, perhaps under the impression it was other than generic cheering. He also had pauses that ran a little too long, and words that seemed to come out two ways, and I suspect at those moments he was trying to work in Talking Points. Ask yourself: What did he want to say about Afghanistan? What did he say? What did he think he said? You could see him correcting his course in mid-stream. If he was confused about the Obama and Romney policies in Afghanistan, well, so is everybody. Did he think Romney would agree with him that Obama should have instantly pulled out our troops?

I have a hunch. The conventional strategists would have been wiser to send Clint out to wing it. Giving him a single Talking Point was an error. Here is a man who knows who he is and what he does, and has never been comfortable with anybody's party line. In his mind was the flow of what he wanted to say and do, and then an undertow of Talking Points that threw him off his own message.

Clint Eastwood is one of the most admirable men in the history of motion pictures, and one of the few who has continued to grow in his art with every passing year. I've seen his new film, "Trouble with the Curve," and it is wonderful. Let me be clear: I love this man. I don't give a damn what his politics are. For me it was the same with John Wayne.

On the night of the speech, I tweeted: 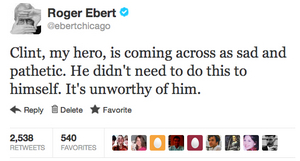 This has been interpreted in conservative circles as an attack by me, "a liberal mouthpiece." Not my intention. I tweeted out of love. If I'd had more words, I might have said he choose the wrong place and the wrong time. I was NOT implying that Clint Eastwood is "old and senile," as one right-wing blog charged.

He is old. I am old. Once we were both young and drank Guinness in a bar in Chicago, when he was still The Man With No Name. He was to move on from that evening and achieve, as actor and director, undeniable greatness. He is the opposite of senile. He is brave. He has a supremely intelligent artistic sensibility. He knows his instrument. Backstage in the briefing, he was handed the wrong sheet music.