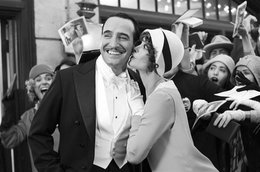 I have not quite become jaded. Sometimes I fear that I am so familiar with movie formulas that some films don't have a fair chance. Then I go to see Michel Hazanavicius' "The Artist" and it tells a story that would have been familiar in the late 1920s, when it is set, and I begin by admiring its technique and am surprised to find, half way through, that I actually care how it turns out.

This was the surprise hit of Cannes 2011, the winner of the Best Actor award for Jean Dujardin. It is a silent film--nearly. It is a black and white, and in the classic screen ratio of 1:1.33, and has music, as all silent films did in one way or another. It is a loose retelling of "Singin' in the Rain," another film about a silent star failing to make the transition to talkies. Dujardin plays a dashing Hollywood leading man named George Valentin, whose French accent might presumably make him unsuitable for sound movies. 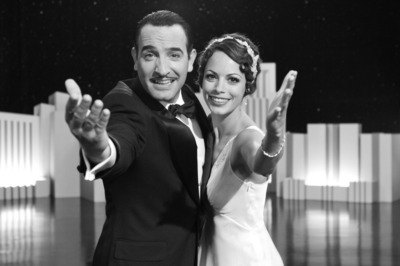 Here you do not require the plot, which waits my actual review. What you may need to know is that silent films can weave a certain enchantment that isn't available with the greater realism of around. During a good one, I fall into a reverie state, an encompassing dreamy absorption that drops me out of time more than a talking picture. The actors do not speak to one another but embody what they would have said. They project emotions, and although they often do it broadly, the medium expands easily to encompass them.

The talkies make Valentin yesterday's star, and elevate a charming little starlet named Peppy Miller (Berenice Bejo) into fame. She's known for her little beauty mark, which Valentin penciled in with love and care. His new film is ignored, hers is a hit, he sinks into depression, she remains loyal, and... 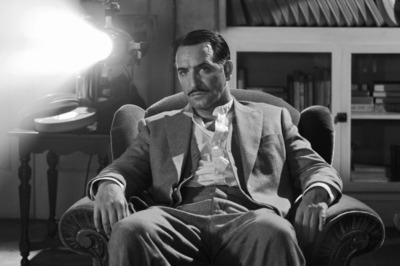 There's a lot more, including a wonderful dog. But let me discuss Jean Dujardin. At age 39, he resembles young Sean Connery enough to qualify as the star of the OSS 117 films, the French 007 spoofs. The way he flashes his engaging smile here, however, reminded me more of Gene Kelly in "Singin' in the Rain." He is confident, warm, friendly, and--unlike Kelly's character--not an egotist.

But there's something else. He would have made a great silent star. His face is perhaps too open and expressive for sound, except comedy. But it serves perfectly for the purposes here. More than many silent actors, he is subtle, and that allows him to negotiate the hazards of some unbridled melodrama at the end. I felt a great affection for him.

I had great admiration for the film as a whole, and so did the audience in the big Elgin Theater, which was possibly the warmest crowd I've been in at Toronto since the premiere of "Juno." This would not seem a likely time for a silent movie, but "The Artist" ignores that and goes about its business. I wouldn't be at all surprised if it's a significant box office success. 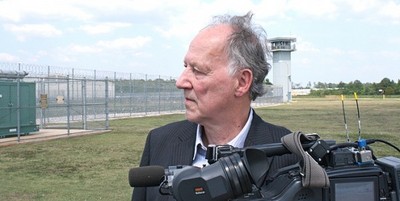 "Gazing into the Abyss: A Tale of Death, a Tale of Life" is the saddest film Werner Herzog has ever made. It regards a group of miserable lives, and in finding a few faint glimmers of hope only underlines the sadness.

The documentary centers on two young men in Houston, one on Death Row, the other spared death but facing a life sentence. There is no reason to especially pity these two. They were responsible for murders distinguished by their stupidity. The film doesn't argue they were wrongly convicted.

Herzog keeps a lower profile than in many of his documentaries. He is not seen, and his off-camera voice quietly asks questions that are factual, understated, and simply curious. His subjects talk willingly. One speaks within days of his scheduled execution. 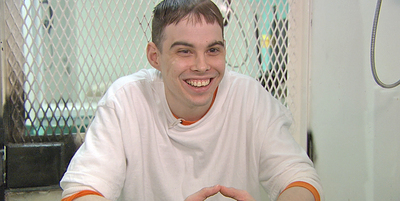 Why was one spared? We meet his father, also in prison for life. His testimony at his son's trial, at which he blamed himself for the boy's valueless upbringing, apparently influenced two women jurors to pity the boy--or perhaps even more the father.

This father seems today a decent and reflective man. He bitterly regrets that he failed to take advantage of a college scholarship, dropped out of high school, and went wrong. He sees his mistake clearly now--too late.

The young men are uneducated, rootless, without personal resources. The father perhaps has benefited from prison, as his son may. We also meet their close relatives, a wife, relatives of their victims, a minister, and the remarkable Captain Fred Allen, who was long in charge of the guard detail on Death Row. What he has to say during a long introspective memory of one event in his life is one of the most profound statements I can imagine about the death penalty.

The people in this film, I think without exception, cite God as a force in their lives. The killers, the relatives of their victims, the police, everyone. God has a plan. It is all God's will. God will forgive. Their lives are in His hands. They must accept the will of the Lord. Condemned or bereft, they all apparently find comfort.

Opposition to the death penalty, I suppose, comes down to this: Although the convicted may not deserve to live, no one deserves to be given the task of executing them. I think that's what Herzog is saying, although he doesn't say it. In some of his films he freely shares his philosophy and insights. In this film, he simply looks. He always seems to know where to look.