Susan Sarandon on 'The Buddy System'

LOS ANGELES - Wil Wheaton, a child actor who is 10 years old, sat on the edge of his chair and stirred his Coke with a straw. Susan Sarandon, an adult actor who had gotten up in the middle of the night with some kind of stomach flu, regarded him with a mixture of affection and nausea.

Sarandon and Wheaton were sitting at the window table of a little deli in Orangewood Plaza, one of those pocket shopping centers out in Pasadena where housewives do the laundry and buy the vodka, and kids do wheelies on their bikes in the parking lot.

They were attracting little notice. Although Sarandon is one of the most successful actresses now at work, with a cult movie ("The Rocky Horror Picture Show"), an Academy Award nomination for "Atlantic City" and the current art-circuit hit, "Tempest," among her credits. On this particular day she looked exactly like what she was playing - a harassed single mom killing time in a shopping center in the middle of a scorching afternoon. The kid was additional camouflage.

"You ever worked in a haunted house?" Wil asked Sarandon. His question bears some notice, since it combines a normal 10-year-old curiosity about haunted houses with a specifically theatrical use of the word "worked," which, as both Wil Wheaton and Susan Sarandon understood it, meant "acted."

"Yeah. In England," she said. "I got pneumonia. Also in New Orleans. When we were filming 'Pretty Baby' we worked in an old house on St. Charles Street named the Columns Hotel. They said it was haunted. They were gonna tear it down, but we fixed it up for the movie and they saved it. I loved the wallpaper. Everybody said it was haunted. It had real big bathtubs you could float full-length in."

"I heard about 'Pretty Baby' but I didn't see it," Wil Wheaton said. "I'll have to show it to you in a few years," Susan Sarandon said. "You don't know what an odd person I am, playing your mother."

She was playing Wheaton's mother in "The Buddy System," a film in which she is raising the kid on her own and Richard Dreyfuss falls in love with both of them.

"I dunno. You seem OK to me" Wheaton said.

"The other haunted house I worked in, we made look even more haunted," Sarandon said. "That was in England, when I was starring in 'The Rocky Horror Picture Show.' That's another movie I'll have to show you in a few years. It's a spoof on horror films. And it's the weirdest thing. They only show it at midnight, but people in the audience dress up like the characters on the screen, squirt water guns at each other, throw rice around, hold newspapers over their heads and throw toast when they say, 'Let's have a toast.' It's all very funny."

"It sounds like a lot of fun," Wil Wheaton said doubtfully. "Your mom," Sarandon said. "The woman who plays your mom is a cult hero for some of the weirdest-dressed people in America." "You went to see yourself?"

"You're so cynical for your age."

"Cynical," Sarandon said, "is always knowing the worst is going to happen. Cynical is buying another dog and knowing your first dog will come back home." "I have two dogs," Wheaton said. "Do you train them?"

"Not until they learn anything. I'm gonna bring Karma on the set one day. We got him after the Great Dane died. That was our good karma. Its real name is Wheaton's Yellow Snow. It's a yellow Labrador."

Sarandon lit a cigarette and looked dubiously at her Tab. "Cynical," Wil said, popping an animal cracker into his mouth, "is never betting on the horses until the last second."

"It's easy to look back when the race is over," Sarandon said. "We're getting a pool," Wil said. "They dug it yesterday."

"Then don't go to see 'Poltergeist,' " Sarandon said. "Terrible things happen in the pool in 'Poltergeist.' That's another movie I'm going to have to take you to see someday. It has, in that one movie, everything you're sure is going to happen that your mother says 'don't worry' but it happens anyway. Toys attack you. You go into your own clothes closet and disappear into the fourth dimension and your mother has to tie a rope around her waist and go in after you. I don't think you're ready for it yet."

"How old are you?" Sarandon said.

"Ten. I waited a long time to be in double digits."

"We'll see all these movies in a few years, but not right now," Sarandon said.

Wil's mother, Debbie, an attractive young woman who does commercials, settled down at the window table and we all looked out into the blazing sun of the Southern California afternoon. Movie sets are often like this, with the actors camped out in the nearest place with a coffee pot, while technicians fuss endlessly over whatever it is they're trying to get right.

"I almost didn't have the strength to get up today," Sarandon said. "You know how the bug hits you and you absolutely cannot move?"

"How long you been acting?" I asked Wil.

"He takes an acting class," Debbie said, "When he was 7, I was teaching a class, and he said he wanted to come with me. I was teaching 7- to 12-year-olds. He just had a way. He took a few classes and said, 'I think I wanna do this.' I didn't push him. I took him to my agent, my commercial agent, and he started working. With Wil, it hasn't ever been a life or death thing, you know, where he really wants to get a part. It's just fun for him."

"He's a special child," Debbie said. "Sometimes he seems as wise as a little old man."

"Tell me something about this movie;" I asked Sarandon. She sipped her Tab and looked game.

"I play a steno," she said. "I'm an unwed mother. I live with my mother, played by Maureen Stapleton. I fall in love with Richard Dreyfuss. I like the idea that it's an ordinary kind of story. It's a movie about the idea that falling in love with a friend is possible." "It's a love story," I said.

"People don't know what's going on now. Only love stories can capture some of the innocence of the past. It's hard to make a love story when everything's allowed. You couldn't make 'It Happened One Night' now because audiences would never believe that Gable and Claudette Colbert weren't sleeping with one another."

"Do you ever find it strange," I said, "that life brings you to places like the Orangewood Plaza Shopping Center in Pasadena, there to make small talk with a child and be interviewed in the middle of a blazing summer day, while fighting the after-effects of stomach flu?

"I have come to the conclusion," Susan Sarandon said, "that life has more imagination than I have, and has dealt me more than I could have hoped for. My only real talent is for staying flexible and counting on a little serendipity. I believe in grace, and my life has been full of it."

She lit another cigarette. "It's clear to me," she said, "that the only thing we know for sure is that life is not going to get any simpler." "What kind of a character do you play in 'Tempest'?"

"Ariel. A character based on Shakespeare's Ariel. "

This "Tempest" is a present-day version, shot by Paul ("An Unmarried Woman") Mazursky in Greece and using the basic elements of Shakespeare's play as counterpoint to modern lives. In the original "Tempest," I recalled, Ariel was the spirit who flitted through the days of a group of castaways, bringing them glimpses of light and grace, accompanied by mysterious, half-heard music. Susan Sarandon blew out smoke and regarded the boiling asphalt of the shopping center parking lot. She yawned.

"I don't know why my character is considered the Ariel character, but she is;" she said. "I don't think there's too much of a parallel." 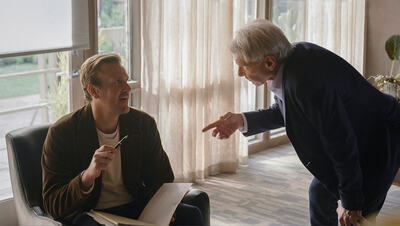