When Paul Mazursky decided to model his new movie on Shakespeare's "The Tempest," he no doubt imagined there would be intellectual fun for the audience in building mental bridges between his modern story and the bard's final play. But it didn't work that way with me, and I wonder if familiarity with Shakespeare is a handicap in seeing this movie.

There is, for example, a scene in which John Cassavetes, as Philip (an architect who has voluntarily isolated himself on an island), has a fight with Raul Julia, as Kalibanos, the hairy Greek goatherd who lives in a cave and pities himself because he is unloved. Kalibanos has kissed Phillip's daughter, Miranda (Molly Ringwald). Now Phillip tries to bash his head in with a boat's oar, while shouting that Kalibanos has betrayed him: "I taught you to read and write!" Kalibanos thrashes in the water and screams back, "I showed you the fig trees and the olive trees."

There is no sense in which this scene works. But it's even worse if we're running a parallel track in our memory, recalling the pathos of Shakespeare's Caliban, the monster who existed without beauty in his life, and was introduced to it only to have it snatched away. Because we remember Shakespeare, we are acutely aware that the dialogue between Cassavetes and Julia is a paraphrase. It's all the more off-putting that the present day Philip and Kalibanos could never have such a conversation.

The whole movie suffers from the same curious sense of displacement. There's nothing wrong with taking a classic work of literature as a starting-point for a contemporary work, but Mazursky hasn't absorbed "The Tempest" in his "Tempest"; he has simply staged it. Contrast this film with "Forbidden Planet," a science fiction film that also begins with the underlying materials of "The Tempest," but transforms them into its own terms so cleverly that most viewers remained unaware of its inspiration.

Mazursky's story is another one of those affluent-urbanite-in-turmoil sagas. He handled this milieu brilliantly in "An Unmarried Woman," and now he handles it awkwardly. Cassavetes and Gena Rowlands play an architect and an actress whose marriage is coming apart. Cassavetes goes to the Greek islands for a vacation with his daughter, and meets a young woman named Aretha (read Ariel), played by Susan Sarandon.

All three spirit themselves off to an isolated island, where Cassavetes grows dotty, peers through his telescopes, wears magician's pajamas and casts spells. Meanwhile, Rowlands takes up with a wealthy king of industry (Vittorio Gassman, as Alonzo), and when Alonzo's party comes looking for the runaways, Cassavetes calls down a mighty storm upon their heads, and they are shipwrecked on his island.

All of this is painfully labored. When the movie works, it works in spite of, and entirely apart from, the Shakespeare connection--in a quiet little scene, for example, when Cassavetes and Sarandon first fall in love. The movie is an ambitious experiment, but a long and tedious one, and our revels end long before Mazursky's. 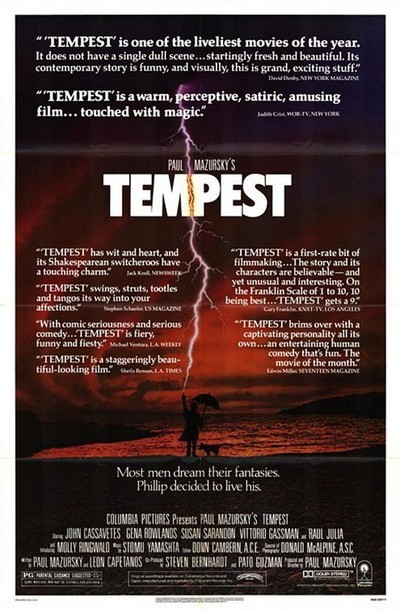